Don’t be daft, there is no draft Humor combating fear 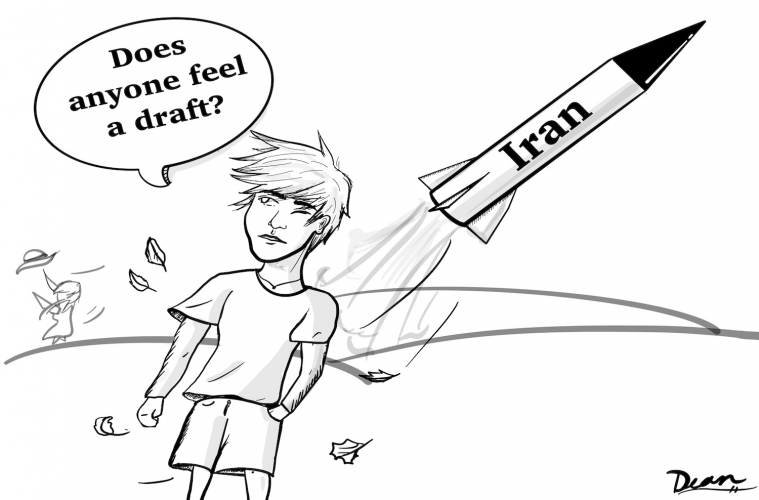 If a war does occur, American teenagers won’t be the ones drafted by the hundreds and stripped of their innocence–but this could be a reality for Iranian civilians. While we use humor to defect from our own fear, we need to take into consideration the lives of others too. Photo Credit: Dean Carrasco

Terror has swept the nation. Recently, Iran and America have been undergoing what seems to be the first steps in beginning a war. Although it is no secret that America has had tension with Iran, the harsh reality of this conflict has left many citizens distressed. More than other age groups, young adults—at the age to be drafted, have been scrambling trying to cope with the possibility of war.

With the death of Iran’s second most powerful military leader, Qassim Suleimani, peace may not be an option. This sparked a trend in Millenials and Gen Z Americans expressing their terror in the form of humor online. From TikToks to Tweets, we have used comedic relief to distract us from the fear we may have.

Most of the humor has been used to deflect from the fact that young adults could be drafted if the war goes too far. The draft was a system that was used to enlist young adults into the army, back when America did not have as many volunteers. Historically, over 100,000 Americans have been reported to dodge the draft by fleeing the country or changing their name. And understandably so, possibly having your life taken, involuntarily, can be difficult to cope with.

While some have found the reaction and humor of American citizens to be insensitive, studies show that humor has been seen to reduce anxiety and other negative emotions we may feel. Additionally, laughter has previously worked as a natural antidepressant for some people.  It is also important to consider that Millennial humor could be a “response to a world that stopped making sense.”

Although it is understandable why our humor can be viewed as ‘dark’ or ‘horrifyingly absurd’ by other audiences, there hasn’t been a draft since 1973. In some way we feel safe, which is why we are responding to the conflict so lightly, but we are not completely oblivious to the intensity of the situation.

Even though most of my peers are fearful of being drafted, I am more concerned with the other consequences of being at war. From rationing resources, financial burdens and the constant unknowing—I do not know how I would cope with my freedoms being taken away from me, especially in my earliest adulthood years.

Despite the unpredictable events that could occur and the eerie speculations of a possible war, it’s not hard to understand how this may impact the mental, emotional and physical stability of citizens in both countries. The active protest Iranian citizens have been engaging in proves that those citizens are not evil and not the American enemy. Just like us, they want the freedom to live their life without the fear of being put into a war they didn’t want to start.

While older generations may belittle young adults for our humor, I think their anger would be better fueled on why the war could be an option in the first place. Even still, I can agree that it wouldn’t hurt to find alternatives to coping than simply laughing it off—especially if a war does happen. However, it is safe to say with over 1.2 million active-duty troops and no recent declarations of war, the draft won’t be used for the time being.