Dude! Do you want to be asked to Sadies? 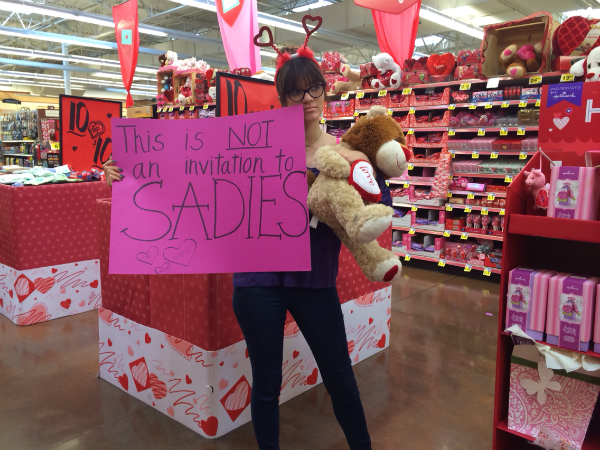 Having a sign that would negate the fact that someone would be asking for a date to Sadie's makes more sense when avoiding rejection.
Photo Credit: Purna Patel

The cafeteria is roaring. There are ooh’s and aah’s coming from circular tables. Everyone’s attention is on the couple at the front of the room, hugging and laughing. There is pink, red, and white exploding in the room. The guy says yes. The girl happy-dances. They hug. People go back to eating.

My head starts to pound at the idea of going through so many preparations, decorating so many posters, basically drowning myself in glitter, and then standing in front of a crowd with the 50% chance of being rejected in front of the student body. No, thank you. I will not be asking someone to Sadie Hawkins. Not this year, and most definitely not in this fashion.

I do not know whether it is rejection that stops me in my tracks, or the fact that I am a firm believer that guys do not want to be asked to Sadie’s. This is not a prediction I have made from researching. It is a conversation I overheard in class a few weeks ago. This conversation was the reason for my doubtful feelings regarding asking someone. It went a little something like this:

Guy #1: How can you say that, dude, everyone wants to go to Sadie’s!

Sadie Hawkins is about stepping up and taking a risk to ask your math class crush or even your best friend.

While I was staring at my classmates in dismay, the rest of the class seemed to be unaffected by the (extremely nonsensical) conversation that had just happened. How did Guy #2 expect to go to Sadie’s when he did not want to be asked? Besides trying to put myself in Guy #1’s shoes just so that I could understand what Guy #2 said, I came to the realization that maybe all guys feel this way.

Maybe it is my own self-reservations that brought these strong views, but how can us girls be blamed for coming off shy when our whole lives we are taught that guys should make the first move? Just when I thought I was adopting the idea of being confident enough to break the barrier by asking someone, this five-line conversation I had just overheard broke any chance that I would ask someone. Unless you are in a committed relationship, asking someone to Sadie Hawkins takes a lot of self-confidence.

I have always had doubts about asking someone to Sadie’s due to my extreme phobia of rejection. I would be lying if I said that I think that guys would be happy to be asked, because the conversation still haunts me. Sadie Hawkins is about stepping up and taking a risk to ask your math class crush or even your best friend. You never know, maybe even my views could change in a week or two.