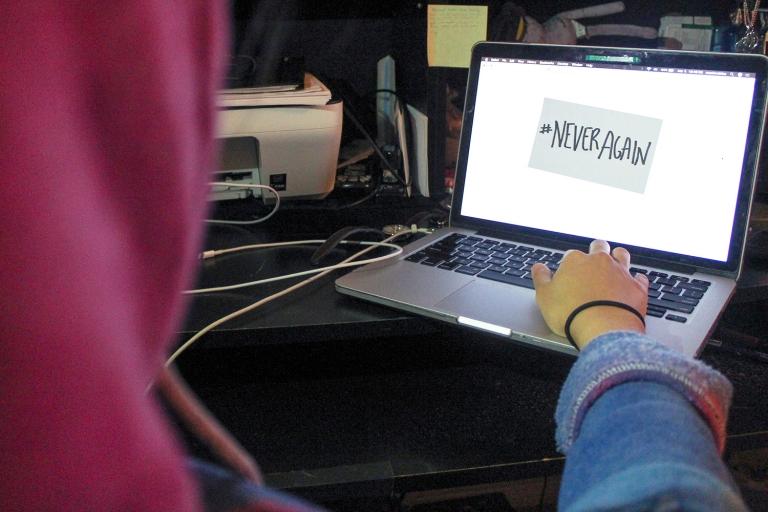 Another way to effectively amplify your voice is through media. Because of the recent mass shooting, #NeverAgain has been popular on platforms like Twitter. Photo Credit: Cassie Valdez

Even though it’s been about five years since students and teachers were gunned down at Sandy Hook Elementary School, controversy over gun reform still remains. This uncertainty of what to do in the government has inevitably led to another mass shooting but this time killing 17 people at Marjory Stoneman Douglas High School. As several political commentators have already pointed out, America is suffering from a deadly cycle of intense anger, yet little action.

Here’s how it usually goes. Rage and frustration plagues the public. Liberals and conservatives debate the Second Amendment. Activists march the streets with colorful posters and scream for change, yet the outcome remains the same. We wait until the yells subside and another massacre happens.

However, high school students in Florida were tired of seeing the same stories repeat. Organizing a walkout to town hall, they chanted “Never again!” and demanded stronger gun regulations from elected officials. Their objective was clear: take direct action to provoke the changes they wanted.

Walkouts are welcome, by cassievaldez

In support of the cause, students across the nation followed in their path, planning walkouts at their own schools failing to realize that without an organized plan, these acts were ineffective. They thought they would have the same impact by hopping on the bandwagon, but they didn’t. The purpose of protests is to amplify one’s voice and emphasize the amount of public support behind certain movements–not just to make posters and march because everyone else is.

By skipping class with only a couple of friends, it seems less like an actual protest and more like an excuse to escape school. Meanwhile, protesters from across the nation including Florida were bulky in numbers and passionate with demands for reform in mind; their first hand experiences gave weight to their words.

Although they skipped class, their protest was meaningful; they made a plan, thoroughly communicated and executed their ideas with purpose. They understood the consequences to follow, but they knew their actions would mean more than the drawbacks.

However, the effect is not quite the same in Las Vegas. Sure, there were some students here and there who walked off campus, but ultimately it’s nothing compared to protests in other states. Even if there was a large amount of students here who participated in a walkout, where would they go? What achievements could be made in the neighborhoods around campus? How can students make a significant change?

I don’t encourage that students walkout of school. Not only will there be consequences, but also a couple students strolling around campus wouldn’t be influential. At the same time, I’m not trying to say that students shouldn’t exercise their First Amendment rights; of course they should. However, protesting during school hours isn’t the most effective option, especially since there’s already a March for Our Lives for locals across the city.

But one must take the area they intend to protest into consideration and how their actions will make a difference. Even though one may have good intentions, if protests are to be successful, a clear and realistic goal must be set.

Before impulsively walking out of class, think about the impact you want to make. Don’t just join the cause because everyone else is–actually take the steps to help it. If you intend to walkout on March 14, understand that you can’t provoke any change without combining your emotion with organized ways to make the most out of your voice.