SATIRE: Not so innocent creatures More than just body, wings 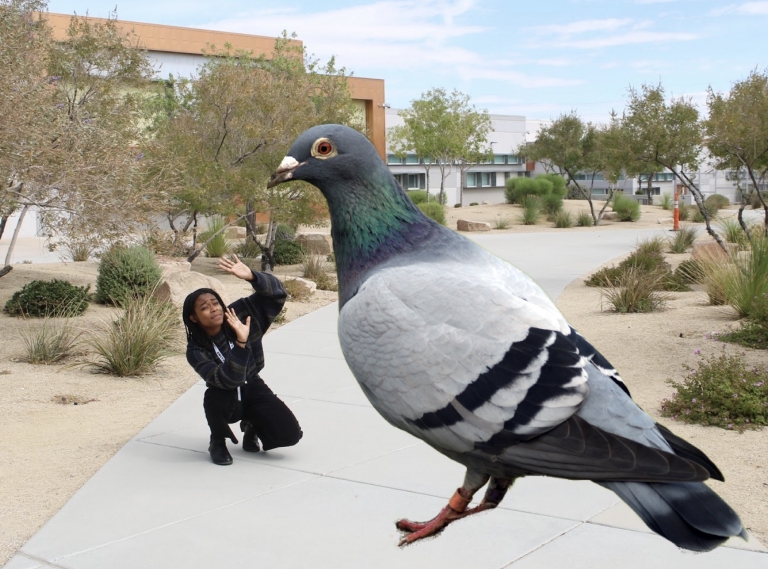 What the world views as “a pigeon,” I see a robot in disguise. Something about those wings and the beady eyes I just cannot trust. Photo Credit: McKenna Thayer

There I am just eating my lunch when I noticed a bird eyeing me. It flaps its small evil wings mockingly, as if I didn’t know it’s power. My friends try calming me down, claiming it was “just a pigeon,” but I am not convinced those birds are as innocent as they play themselves off to be.

Only 12 percent of Americans claim they are afraid of birds, but their fear should not be looked down upon. Have you ever tried spending one lunch outside, only to be interrupted by those menacing pigeons swooping and walking around as if they own the place? It should not be looked over how powerful these creatures have become.

There are plenty of scenarios where this could happen, all birds have to do is plan a strategic attack. 300 billion birds could sit and wait above ground, waiting to fire their poop while us citizens live on unexpectedly. Or they could all swoop down and steal all of our weapons, leaving us defenseless. We would be caught by surprise, and with little time to prepare we would be enslaved by those flying demons before anyone could process what was happening.

Maybe this sounds ludicrous, but we cannot ignore the conspiracy that these flying creatures aren’t real at all, but just surveillance cameras placed by the government. Not to get controversial, but does no one else find it interesting that they fly away when you get too close? The “Birds aren’t real” theory isn’t entirely theoretical, there are dozens of drones that are created and sold to act exactly like real birds.

While surveilling the United States is the least of my worries from birds, I think it is interesting to mention that they out number humans over 300 billion times over. There are approximately 57 billion birds to every billion group of humans; at any moment, they could all get together and decide to take over the world. While my fear of birds may seem childish and possibly insane to others, we cannot ignore the hard facts.

It is haunting to know at any moment our species could be taken over by the flying rats of the sky, and quite frankly I think comparing birds to rats is a major offense on the rodent species. Maybe my anger is misplaced and I should spend my time preparing for college or investing in hobbies, but I can’t sleep another night knowing that those birds could be up to something.

Technology is not the only thing advancing these days, and if those flying things are real, then it is not to say they don’t have their own government and way of life. While I have no clear evidence that birds have the intention of taking over our society, I don’t believe they are content with spending each of their waking days waddling around eating seeds.