SATIRE: Owning a Hydro Flask makes you a better person More than just a water bottle 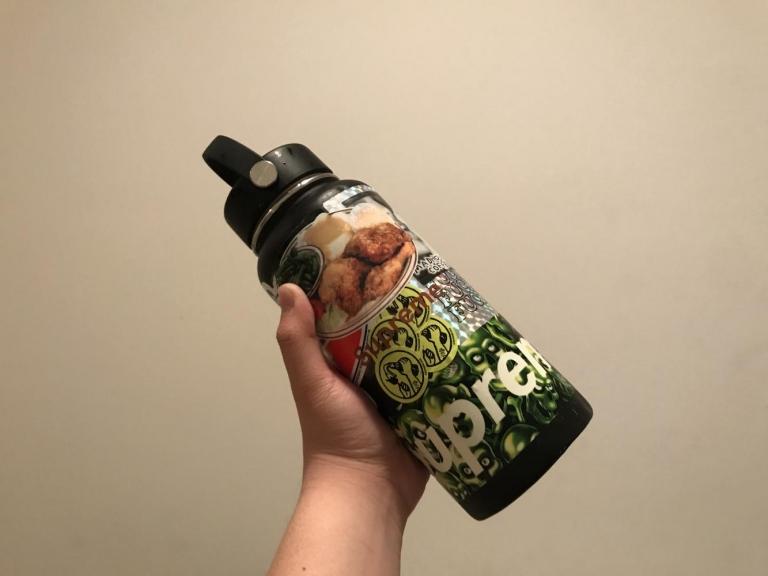 Of course I sticker-bombed my Hydro Flask, how else would I let everyone know that I spend my paychecks on clothes? Some people call it narcissism, I like to call it self-expression. Photo credit: Vinh Tran

I’ve begun to notice more and more people swinging around gigantic metal water bottles, called Hydro Flasks, all over campus. However, I’ve never really seen anyone drink from them. The reason why is because they’re actually just status symbols, and here are 10 reasons why you should buy one.

1. They’re a not-so-subtle bragging item. Hydro Flasks are expensive, and I mean really expensive. I spent around $40 on mine. I had to endure the agonizing pain of minimum wage for more than four hours to afford such a luxury. It was totally worth it because now I can gain clout while getting hydrated.

2. Temperature control technology. Get this, Hydro Flasks keep cold liquids cold and warm liquids warm. This is some innovative technology, surely no one has ever invented something like this. It’s totally not just an over-glorified thermos.

3. They make for great alarms. Because they’re made of a thick layer of metal and aluminum, they’re basically the physical embodiment of the Fourth of July. Even just a slight bump or tap will make a sound that will surely grab the attention of everybody in a ten-mile radius.

4. You never have to carry a water bottle. Who would have thought that you could substitute lugging around a one pound bottle of Arrowhead when you can lift a 50 pound thermos? Oops, I meant Hydro Flask. Just think of the convenience!

5. Stickers everywhere. Did you ever want to let everyone around you know that you ate at In-N-Out Burger one day and got a sticker for it? Well, now you can. A Hydro Flask is basically a canvas where you can cover it up with a bunch of sticky paper, only for it to peel off after a month.

6. You’ll never need an ice pack. Ice stays frozen for a longer period of time in a Hydro Flask. So if you ever trip over the weight of your water bottle or accidentally smack your leg, the pain is negated. You won’t need to go to the nurse if you can treat your injury on the spot.

7. Impromptu weapon for self-defense. It’s heavy. It’s metal. And it’s intimidating because your attacker probably knows how much you spent on it. These are all the features of a menacing weapon. No one will touch you knowing you can probably break through the Earth’s crust by dropping it.

8. It can be a doorstop, paperweight, etc. Ever need something heavy? What if it’s windy and you need to hold something down? What if there’s a door that just doesn’t want to close? Hydro Flasks are there to save your life.

9. It’s pure fashion. Color coordination is everything. Wearing a yellow pair of shoes paired up with a yellow Hydro Flask is the prime example of fashion at its highest point. Gucci could never. Louis Vuitton could never. Hydro Flasks are fashion icons.

10. Did I mention it keeps things cold? Hydro Flask owners just love telling people that their water stays cold, no matter how many times they’ve mentioned it. Millions of years of evolution have lead to this kind of advanced research and development, why not brag?