PRO/CON: Syrian Refugee Crisis: Not America’s concern The acceptance of Syrian refugees should not be put into action 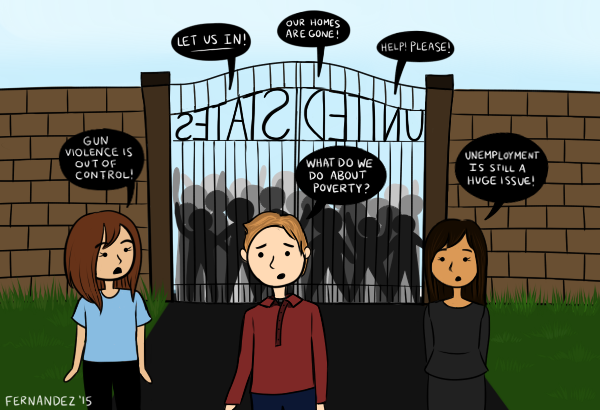 Accusations against autocratic Syrian President Bashar al-Assad regarding his utilization of chemical warfare and oppression of Syrian rights have caused his people to rise up against him, along with multiple uninvited terrorists.

Because of unsuitable living environments, 3 million Syrian refugees have fled to other countries across the world. Some countries like Turkey and Germany are happy to accept the refugees, while others fear the dangers of welcoming them. As of Nov. 15, 2015, 31 states are opposed to allowing refugees into the U.S., which sparked uproar regarding the decision to welcome the refugees.

Some people believe that America is a place for opportunity and that it is our duty to welcome anyone past our borders; however, we must also consider the safety of our country. As much as I hate to refuse a helping hand, the risk of being surrounded by danger is much too great.

Although the lives of millions of Syrian refugee are at risk, we still need to remember about our own people.

One of the hazards that the United States faces from harboring Syrian refugees is the chance that some may be extremists who will commit acts of terrorism. For example, Ahmad Almohammad, one of the assailants behind the recent Paris attacks, entered the gates of France through Greece and no one suspected him as a terrorist. After Almohammad died terrorizing the streets of Paris, a Syrian passport was found on his body. While his possible refugee status and partnership with I.S.I.S. is unclear; what is certain is that he did commit these crimes and waiting for confirmation of his possible refugee status will just further risk the lives of millions.

Although the lives of millions of Syrian refugee are at risk, we still need to remember about our own people. Every one out of nine veterans is homeless, with over half of them being disabled. Even though there are numerous projects that aid the lives of veterans, the status of veterans within our country has gradually gotten worse. The recent $1.4 billion budget cut to the Department of Veteran Affairs has impacted veterans greatly. Along with cuts to national cemeteries, the elimination of funding for numerous medical care facilities will prevent veterans from maintaining their well-being. This begs the question: should we save the lives of those who have fought for us or should we help others with their battle?

Another concern that many Americans have is further overpopulation of the U.S. From 1915 to 2005, the population has grown an additional 200 million people. One of the problems of overpopulation is an overuse of resources. With an average of 384,350 hectares of forests lost per year and a potential drying of essential water sources such as Lake Mead by 2021, an additional 100,000 million people would undoubtedly speed up the process of deterioration.

There is no doubt why some people think we should not accept refugees into the United States. With a world being torn apart at the seams, a helping hand is all the refugees need, but we have to consider American citizens that need our help. To be blunt, I do not believe that accepting more Syrian refugees in our country is the right decision at this time, and we need to focus on fixing our own conflicts.