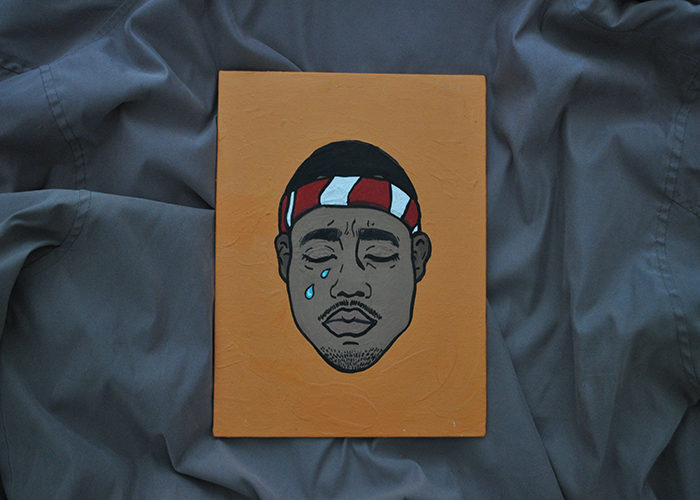 I bought a painting of Frank Ocean because he's one my favorite artists. Listening to his music when I come home from school is one of the best feelings I can experience. Because of this, I want to adopt the same ideals as he does: advocating equality and being open-minded. Photo credit: Isabelle Del Rosario

The first thing I do when I wake up is listen to music. Throughout the day, earbuds are glued in my ears. Even before I lie down to sleep, I still have Spotify running. Music is the first and last thing I experience in my daily life.

They say things are best expressed in song, and I for one can agree. Artists like Tyler, the Creator can convey their insecurities and fears through songs like “November“ by saying “What if my music is too weird for the masses?”  I can experience and relate to whatever they’re feeling, whether it’s euphoria or misery.

Music is so influential that it can define entire decades. “Take on Me” is one of my favorite songs from the 1980s. Even though I was born way after the end of the era, I can still imagine how teenage life would be based on the music. The pop beat and care-free lyrics make me want to get out and experience life.

Today, music instead serves to spread a message among listeners. Trying to make a catchy tune has taken a backseat for more important issues. Certain subjects like suicide and same-sex marriage were seen as taboo. But today, Logic’s “1800-273-8225” raises awareness for people suffering from depression. He switches from “I don’t want to be alive” to “I want you to be alive” in order to invoke the feeling of hope to the listener.

Artists use music as a means of amplifying the need for change in the world. Although I’m not the biggest fan of Beyoncé, I still look up to her as an advocate for women’s rights and equality. Her efforts towards being a role model have only increased with every album release. By utilizing her popularity among the music industry, she has spread her messages globally.

Artists like Beyoncé have made it clear that music isn’t just something for people to pass time; music has the ability to bring people together. I listen to music because we live in a time where the world is divided. Despite split views on women’s rights, same-sex marriage and religious freedoms, artists can share their opinions in hopes of bringing people together.

Music has the capability of influencing different age groups, cultures and society as a whole. A good handful of my friendships were created due to sharing music. Because music is so influential in the modern world, whenever I put my headphones in, I’m listening to the struggles, frustration and joy of the world around me.