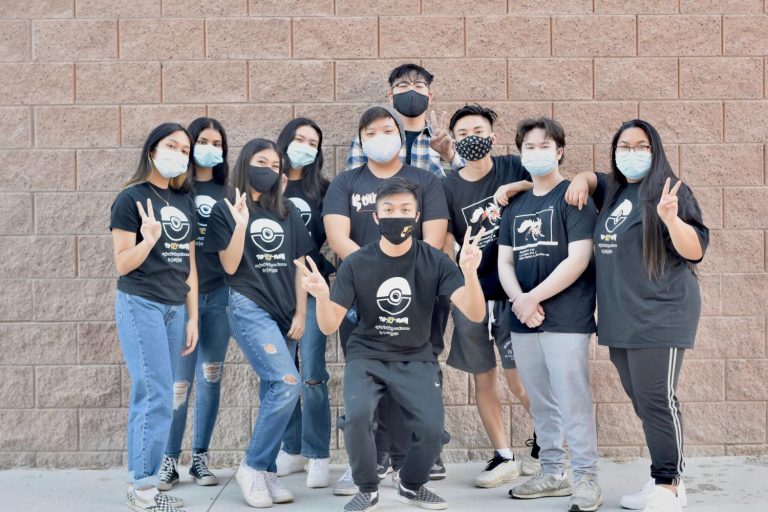 Key Club board decided to get together for a picture of the new board members and since this was during quarantine, it made it a little more challenging. Key Club is only one of the clubs, out of many, on-campus that represents leadership and teamwork. “We were taking our annual board photos because we weren’t able to take them in March before quarantine began,” junior Daniella Sayson said. “These people on board helped me overcome the part of me that was always shy and introverted. I’m very thankful that I’ve been able to be around such fun and memorable people.” Photo Credit: Cody Barrameda

From learning how to work in a team, to how to engage with diverse groups of people, leadership of a student organization is pretty much a teenager’s first job. This role impacts the way people act in real-life situations and can make a difference in the way someone acts and approaches a situation – this shows particularly in Key Club President Daniella Sayson.

“Being a leader has taught me to have more courage in myself and it has also taught me how to be less shy because before I was more introverted,” Sayson said. “I’ve been able to help my members grow throughout my time in this club and I feel that I’ve built their confidence even just a little which is a great feeling.”

Taking on a leadership role comes with responsibility and pressure. It’s not easy and there can be multiple people one has to assist and guide, depending on the role. For SkillsUSA Vice President Aaron Blum, he enjoys being a leader and likes the challenge it brings.

“The biggest things when being a leader are being responsible and confident. It takes a lot to have something as successful and simple as a membership meeting, especially when you need to accomplish a specific goal,” Blum said. “I’ve been able to help plan events for my club and run events a lot easier than before. There have been multiple times where I’ve been able to get my group to a common goal and having a strong leader helps the team overall.”

Having leadership roles requires one to think ahead and plan for the best results in a variety of situations. Like many new skills, they may not be totally comfortable at the beginning.

“The first meeting I led was my first experience doing that as president,” Sayson said. “I was super nervous because in my previous position as secretary I didn’t really have to talk during the meetings but now I am the one leading them so I have to talk the most. I remember my heart was racing, but as the meeting went on I felt more confident and comfortable.”

While leadership may come naturally to some, others have to try harder to obtain the confidence to lead a group of people in the right direction. Blum has had to become more familiar with commitment, responsibility and dedication throughout his journey in leadership. Also, FCCLA Co-President Nia Anderson has grown more confident and has allowed for members to feel comfortable confiding in her.

“I’ve been in numerous leadership positions since the third grade, but earlier this year as Co-President of FCCLA, I had to step up and run our meetings, when the president had other obligations. I loved being able to connect with people on a different level and have fulfilling and cordial conversations,” Anderson said. “I’ve grown as a person and especially in the fact of accepting people for who they are and learning not to judge. I am grateful that I’ve become open-minded, welcoming and understanding throughout this year so far.”

According to inspire.com, 83% of organizations say it is important to develop leaders at all levels. Being able to show individuality and determination embodies the role of leadership and can affect future jobs and roles.

“When being a leader, you have to be able to inspire others and be better. A leader to me is also a person that others look up to you and can lean on,” FBLA Vice President Razelle Antipuesto said. “I’ve learned patience and I had to learn to work with people and sometimes it becomes overwhelming so patience is important for this. Being a leader has shaped me into the person I am today in so many ways. For one, being able to be comfortable in front of a crowd and talk to people.”

Even though leaders have goals for their peers, arguing, disagreements and having different views on a decision can easily occur when considering multiple people in the process. To get through these conflicts, leaders have to be inclusive and reflect ideas amongst everyone.

“The number one thing I want to teach my members in Key Club is to be kind and accepting of others,” Sayson said. “I say this because it’s important not only within our club to have inclusiveness but I want them to also apply it to their own lives and help create a better community around them.”

The leadership qualities adapted from being in clubs and taking roles such as president and vice president help shape the way that individual is and also teaches them skills for their futures.

“My leadership experience comes into play at home often. I live with a sister and cousin that are really close age-wise, and whenever they argue about literally everything, I choose to step in and use my leadership skills to try to resolve the conflict peacefully and quickly,” Blum said. “The biggest thing I want to tell anyone in SkillsUSA is to find something you like and go for it. I like being a leader and public speaking, and those interests have built me to the person I am today.”

Throughout experiences in being a hard-working leader, memories are made and helping people becomes a large role in their life.

“My favorite part about being a leader is being able to help my members grow as individuals and seeing them impact the community together through service and being kind makes me feel extremely grateful and content,” Sayson said. “Being a leader has taught me to have more courage in myself and it has also taught me how to be less shy because before I was more introverted.”