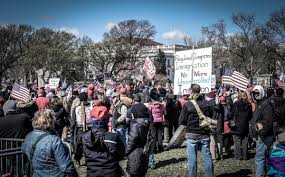 On January 6th, the U.S Capitol was invaded by an angry mass of Trump supporters while Congress was verifying Biden’s victory. Photo Credit: Wikimedia Commons/Ted Eytan

What was supposed to be a day of confirming President-elect Joe Biden’s win by the Electoral College was quickly interrupted by a mob of Trump supporters. Following a speech by President Trump in which he told supporters to “Walk down to the Capitol,” and warned that they “will never take back our country with weakness,” pro-Trump insurrections broke in and seized the Capitol. The speech followed a string of false tweets Trump made about voter fraud.

The Capitol is now secure, but the crisis ended with four casualties and dozens of arrests. According to law enforcement, one of the victims was a woman who was shot in the chest, while the others died due to medical emergencies.

“One adult female and two adult males appear to have suffered from separate medical emergencies, which resulted in their deaths. Any loss of life in the District is tragic, and our thoughts are with anyone impacted by their loss,” D.C. Police Chief Robert Contee said in a news conference.

“Media reports regarding the death of a United States Capitol Police office are not accurate. Although some officers were injured and hospitalized yesterday, no USCP officers have passed away,” the USCP Police said.

Given the violence that erupted, all three Democratic members of the House of Representatives from Nevada have endorsed impeachment, including the third district’s Susie Lee.

“President Trump’s primary duty is to protect the American people. Not only did he fail to uphold that duty yesterday, he actively incited the attack on lawmakers in the Capitol and on our democracy itself. For that, he deserves to be removed from office, whether by invoking the 25th Amendment, impeachment, or resignation,” Lee said in a statement.

Many students were outraged and felt that race played an important part in how the situation was handled.

“My opinion on this US Capitol raid is that it’s extremely embarrassing, inappropriate and racist. This attack on the Capitol is a terrorist attack. People claim it is not just because they are white, but I know if a person of color did this it would be called a terrorist attack,” sophomore Bianca Kingham said. “This is a perfect example of white supremacy and racism at its finest.”

As the investigation continues, the FBI asks individuals who have any evidence of what occurred to step forward.

“If you have witnessed unlawful violent actions, we urge you to submit any information, photos, or videos that could be relevant at fbi.gov/USCapitol,” the Bureau posted to Twitter.