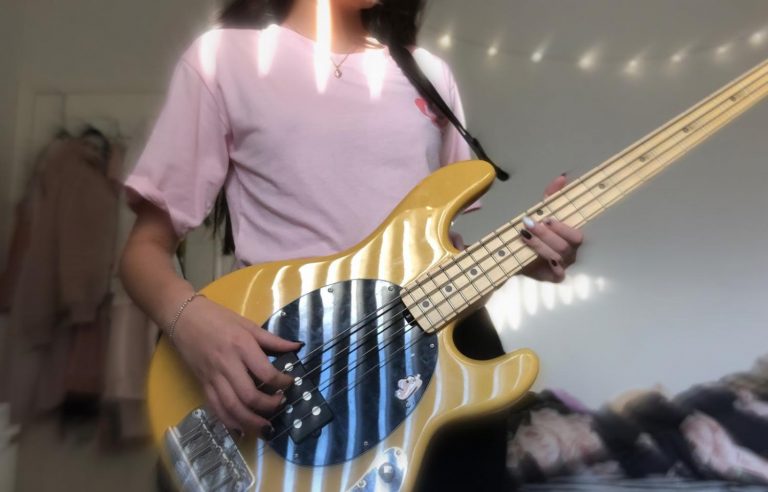 After her distance learning, sophomore Jasmine Thai spends hours in her room learning a song from the movie “Your Name”. Thai finished the learning process after a long 3 weeks, and now considers it her favorite song. “Playing, it relaxes me. I am able to work on something I love and put all my focus into that,” Thai said. “I don’t have to worry about anything else that going on. It’s like a stress reliever.” Photo Credit: Jasmine Thai

Being forced to try new electives and hobbies is something most people would be anxious about. But as she plays her guitar, sophomore Jasmine Thai smiles radiantly with the sound of music filling her ears. Nervousness feeds on her mind, but she worked hard to make it through the once dreaded class.

Playing not one but three instruments, including the bass, acoustic guitar, and keyboard, Thai now spends hours in her room doing something that she’s learned to love.

“I don’t know how to explain it, everything just clicked for me,” Thai said. “I never played an instrument other than a recorder and when I held the guitar, it felt like everything just fell into place. I strung a few notes and realized that it was something I wanted to continue with. I thought, ‘Wow this is great, how have I never played an instrument?’”

Once Thai started learning the guitar, she was inspired by her fellow classmates in band. They helped each other and their teacher always motivated them to get better.

“The whole class that I had just helped each other, so we could get and sound better as a group,” Thai said. “I had a smaller group of friends that I was close with and loved playing with. we wanted one another to succeed.”

The first time performing for Thai was nerve wracking, however she was able to push through.

“After I played my first concert, I felt satisfied and the feeling of when you work super hard on something and present that to people,” Thai said. “Being able to show them what you’ve tried so hard on, and they stand up to applaud you, it’s so rewarding.”

Feeling accomplished when she plays the guitar in front of an audience, this is one of Thai’s favorite feelings. Seeing people stand, watching her as she strums the guitar’s strings while they wait for another song, Thai realizes that she truly is talented.

“When the advanced band and I performed outside of school at a banquet, we were playing outside the main hall, but people stayed outside instead of going in,” Thai said. “Knowing that they stayed outside to hear us play, made us feel great.”

Experiencing many great moments, such as playing at a banquet, Thai remembers the wonderful and not so pleasant memories.

“At one of our winter concerts, I got a solo, and it was the first time I messed up in front of a big group of people,” Thai said “It was band and guitar playing together and I forgot that guitar had their own song. I got up and went to put my instrument away. The announcer tried to get my attention while everyone was looking at me. I put my instrument in the stand and ran back to my seat, on the other side of the room. It was a very embarrassing walk back.”

Even though Southwest does not offer extracurriculars related to music, Thai decided to attend anyways, especially since it isn’t the best career choice for the future.

“When I first found out that the school didn’t have any music classes, I was upset and didn’t really want to attend Southwest anymore, ” Thai said. “Instead, I wanted to apply to Las Vegas Academy of the Arts for guitar, but I became okay with it. I play on my own time and the school did start a club. I also know that guitar and music aren’t really stable jobs for the future.”

Although Thai was hoping to join the Music Club, due to the ongoing pandemic she was unable to participate. Thai doesn’t play as much as she would like and looks forward to joining when in-person school resumes. She had a great feeling when she first started and it is something that’s one of a kind.

“It felt really rewarding [learning our first song] and once we finished and put it all together, it sounded amazing,” Thai said. “You feel insanely proud when you were able to do something like that. I went from not having an interest in music, to having this love for guitar.”

It is difficult for Thai to do school and music since she wasn’t able to join Music Club, but without taking guitar in middle school, she wouldn’t have realized her fondness for it.

“I wasn’t apart of the club, but I did consider joining it. My parents didn’t really want me to join because I didn’t have enough time, I mean it’s hard to focus on just one,” Thai said.  “But, playing the guitar, it’s not something that everyone can do, it makes me feel special and accomplished. When I see everyone stand up to applaud something that I did, it makes me feel like I’m on top of the world.”