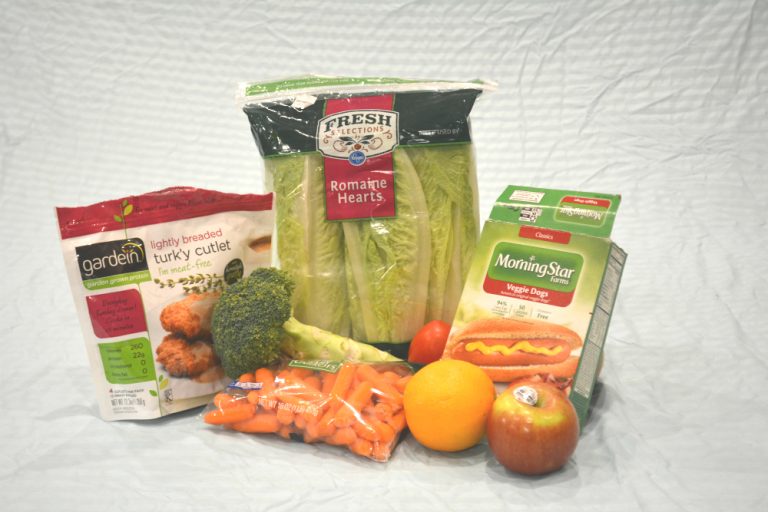 Standing in line with her friends, junior Natalia Reed scans the menu in search of something to eat. Her friends offer suggestions: chicken wings, hamburgers and seafood. But they all contain something she won’t eat. Not taking her eyes off the menu, she quickly says “I can’t have any of that, I’m vegan.”

“Where do you get your protein? How can you not eat meat? Wow, I could never do that.”

As these questions fly at Reed, she tries to answer them as politely as possible to defend her choice to be a vegan. In her eyes, avoiding meat and animal products altogether is the choice to treat animals as humans.

“Seeing how animals are treated and how farming is done is really disgusting and I could never think of eating that,” Reed said. “Seeing animals hurt makes me very upset so I feel like if it’s not good enough for your eyes it shouldn’t be good enough for your stomach.”

Reasons for an animal-free diet

A vegan and a vegetarian are similar in that they don’t eat meat; however, vegans go further than that and avoid all foods stemming from animals, like dairy and eggs. Pescatarians on the other hand don’t eat meat, but do eat fish. These lifestyles don’t always end at the diet– they can also include only using vegan cosmetics or staying away from zoos.

“I was in my room on YouTube and I saw ‘The Best Speech You’ll Ever Hear’ by Gary Yourofsky and he was making some really interesting points that conflicted with what I always thought,” Reed said. “Something spoke to me and I made the connection that there’s no difference between my pet dogs and a cow and there shouldn’t be.”

YouTube videos and documentaries have contributed to the rise of a meat-free diet, showing behind the scenes of the animal product world. The documentary Blackfish focuses on the treatment of whales at SeaWorld and Food, Inc. uncovers the practices of corporate farming.

“I feel like I don’t make a great impact, since I’m only one person,” junior Hershey Tan said. “Although others who are against eating meat go on strikes and rebel. They are the ones who really make a difference in the environment. The people who stand to shut down SeaWorld due to their irrational behavior towards the sea animals really make a difference.”

According to the article, “Factory Farming: Misery for Animals,” the animals in the meat industry are given little to no space, kept in metal crates and are not allowed to raise families or see daylight.

“I decided to become full vegan, due to the fact that animal cruelty doesn’t stop at just meat products, it continues with the milk and egg industry as well,” junior Kyle Elder said. “Baby calves are taken away from their mothers just so the milk produced for the calf can be used for profit, while the calf is either raised to be another dairy cow or veal. The egg industry is even worse: hens are stuffed into cramped wire cages for their eggs and if they have a male chick it’s killed.”

Not only do students adopt a vegan or vegetarian lifestyle for ethical reasons or to reduce their impact on the environment, students also do so for reasons relating to their faith.

“We [Ethiopian Orthodox] believe that by depriving yourself from meat, you’ll be more connected with your spirituality,” senior Samrawit Misiker said.

People under this religion undergo fasts where they are strictly vegan for certain periods of time. Buddhists and Seventh Day Adventists, among other religions, also believe in going meat free.

“During Lent, before Christmas and during other times of the year we are strictly vegan but for the rest of the year, I’m only vegan Wednesdays and Fridays, which I started when I was seven,” Misiker said. “A few years later I did a fast that was only 15 days, then I started the Lent fast in sixth grade, freshman year I started the Christmas one and there’s one in July that I started two years ago.”

For some, becoming a vegetarian comes with its own list of obstacles. Giving up all meat can be a hard transition because for most, it’s all they’ve ever known, but for others, going cold turkey is all too simple.

“It was very easy for me since I already didn’t like most favored meat products, such as steak, ribs, hot dogs, etc,” Tan said. “Quitting bacon probably would have been the hardest transition. It was something I would usually enjoy for breakfast.”

After being a vegetarian for a little over five years, junior Lauren Grayson has no problem hanging out with meat eaters.

“There’s no big problem with hanging out with meat eaters except if they love cooking burgers or bacon,” Grayson said. “The smell is just overpowering and makes me sick. The only other problem I have is if the person can’t respect my decision and keeps bugging me about how I’m not ‘a human’ for not eating meat.”

Vegans and vegetarians typically remind themselves of their reasoning for this lifestyle, helping them to stick to their diet.

“Seeing that cruelty for animals continues throughout everyday life, breaks my heart,” Elder said. “Their lives mean something, you can’t just silence them.”

Although one may be surrounded by chicken or cheese, the temptation to sneak a strip of steak typically isn’t strong if there are vegan-friendly options available.

“It’s not really being tempted to cheat, it’s more about always having to have your own alternative food and at parties you can’t really participate and eat the food,” Misiker said.

Getting rid of meat in a diet can seem daunting, but there are various vegan options to replace what a meatless diet may lack. Tofu and soy burgers, fake sausages and chick’n are available in stores, and companies such as Beyond Meat and Gardein offer a variety of meatless products, and Daiya produces dairy-free options.

“I love basically every dairy alternative, like almond, cashew and soy,” Misiker said. “Vegan cream cheese, hot dogs and sausages, and sliced deli meats are all amazing. Because of this, I’m more aware of what I’m consuming and the alternatives to ‘normal food,’ and I do feel healthier if I eat a vegan cake versus a regular cake.”

With the number of vegetarians and vegans in America growing nearly 12 percent since 1973 according to a Public Policy Poll, companies from food to cosmetics have launched products to meet the demands of their vegan consumers.

“Vege-Way is a great place to go, I’ve had almost everything on their menu by now,” Misiker said. “My favorite thing from there are their fish tacos, and their burgers are really good.”

Vege-Way is a plant-based fast food restaurant featuring an entirely vegan menu. The restaurant opened recently and is run by the Kenny Chye, who also owns Veggie House, a vegan Chinese restaurant.

“Our owner decided to open Vege-Way to appeal to more of the vegan community and give us more options,” Vege-Way supervisor, Paris, said. “This restaurant is open for anyone to try, but it’s to appeal to more of the vegan and vegetarian community because there aren’t a lot of places out there like this. We’ve had meat-eaters come in and say they love our stuff, so it’s for everyone, but vegans are the main group we opened for.”

There are several cited benefits to eating an animal-free diet, and Vege-Way prioritizes creating plant-based alternatives for their vegan customers all thought up the owner.

“Chef Kenny came up with the menu himself,” Paris said. “We’ve added a few things since then by just playing around in the kitchen, but he came up with the burger, the beef sandwich and the fish taco. We wanted to make items that you wouldn’t normally see on a fast food menu. We actually had soup, which was more seasonal, but Kenny came up with most of the menu.”

The fast food spot is one of the first of its kind in the Southwest Las Vegas community, offering quick vegan options to those part of this lifestyle.

“For non-vegan people, it’s easy for them to go through the drive-thru, but when you’re vegan, you don’t have that much of an option,” Paris said. “Now it’s [veganism] growing and there are more options, and at night we get especially busy because people are getting off work and they don’t want to go home and cook. When you’re vegan it can sometimes be a little more difficult, so coming through our drive-thru and picking up a burger makes it easier for them.”

With business growing and the owner deciding to add a second location, employees of the soon-to-be chain feel this lifestyle is becoming increasingly popular.

“Our first week was pretty intense, we usually had about 15 cars in the drive-thru,” Paris said. “Since then, business has kind of evened out. We did well enough to open a second location last week, so we’re really excited about that and see Vege-Way grow. We want to be the next McDonald’s, but not McDonald’s.”

With more options readily available for those choosing to ditch a red steak, leading a meat-free lifestyle seems to be an increasingly easier diet to achieve. Even major fast food chains, like Burger King and In-N-Out, offer vegetarian choices for their customers.

“Even though I’m not vegan every single day, the days that I am hold a special weight because I’m doing it as a testament to my religion,” Misiker said. “For those that choose to be vegan or vegetarian full time, I support and understand their decision to do so.”

For those looking to join this lifestyle, the meaning behind having a “forks over knives” mentality varies. Whether it’s for the sake of one’s health, the environment or supporting animal rights, everyone under this umbrella has a reason for this choice.