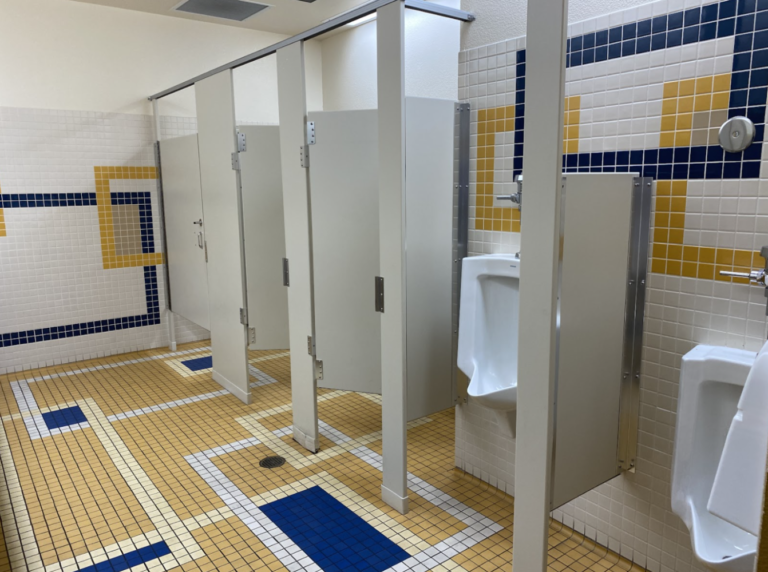 After years without any issues with graffiti, administrators are noticing an increase in vandalism. Students who are found contributing to the vandalism will face disciplinary action. "I always hear about the drawings in the boy's bathroom, and they are always the most immature things.” junior Alyssa Miguel said. "One of my guy friends even saw a sandwich in the toilet once." Photo Credit: Tishie Nyitray

A wave of vandalism incidents has attracted the attention of school administrators. The defacements of men’s bathrooms have led to disciplinary actions, including restroom escorts being assigned to the “D” building.

“For the first time in the history of Southwest, we’re having graffiti in our bathrooms and it’s always in a boys’ bathroom,” Principal Donna Levy said. “Obviously, our custodians are gems with getting rid of it, but that is a huge problem.”

Levy plans to set up an anonymous Google Form for students to report possible vandals, in addition to monitoring the school security camera system.

“We’ve been watching the cameras constantly in the places that we know we’re having a lot of this problem,” Levy said. “We have campus security monitors so if you are in the ‘D’ building, which would be mostly a sophomore building, and you are a boy, you have to be escorted to the bathroom because you can’t be trusted.”

Some male students feel as though this rule has instilled distrust between the administration and the student body.

“This type of thing happens in all high schools, and it isn’t like people are drawing huge things,” junior Mason Deiter said. “It’s really not a big deal in our school compared to some of the other schools around the district. If anything, it’s only a couple of kids drawing the stuff and it’s mostly harmless anyway.”

With the increase in vandalism, not only has administration dealt with a heavier workload trying to identify the culprit, but it is costing the school money to remove.

“I really wish I knew why all of a sudden we feel the need to destroy our property. I don’t understand why anybody would do that,” Levy said. “It costs us money and it ruins our environment and makes you feel generally unsafe when things are graffitied and dirty. When I am working as hard as I am to keep this a clean and nice learning environment for you, why do you feel that we all want to look at your very bad artwork?”

The janitorial staff has to deal with the vandalism first-hand, being the ones who are actively cleaning it.

“It really takes away from all of the other things that need to be done,” custodian Jessica Johnson said. “Instead of focusing on cleaning the entire bathroom, we have to spend time removing the drawings. This is not the place for this type of thing, just stop doing it.”

Having experienced major forms of vandalism with graffiti/tagging in other CCSD schools, Political Science teacher Joseph Juliano believes that there might be an underlying reason for the uptick.

“I think it starts with understanding why students are feeling compelled to act out and either destroy or deface property,” Juliano said. “This is abnormal behavior and is usually a sign of some larger feeling of anger. One way my previous school handled tagging was to dedicate a wall on campus to graffiti artists so they could engage in artistic expression without defacing the campus.”

Some students believe that the repercussions, such as suspension, because of drawing such images outweighs the possible short term excitement.

“I really don’t understand why students are doing it in the first place,” junior Alyssa Miguel said. “It really just puts more work on the people who have to clean it up. And the kids always end up getting caught, there are cameras everywhere and now with the hall monitors, there is no way you won’t get caught.”