The ghosts of the gay marriage debate What both the left, right can learn from the fight 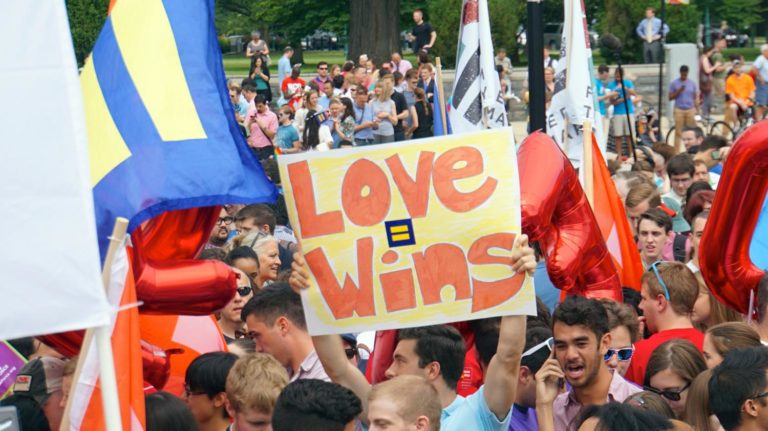 There was an outpouring of liberal relief following the Supreme Court’s 2015 same-sex marriage decision. Both sides have something to gain from reviewing the history. Photo Credit: Ted Eytan

The first national political fight I ever paid actual attention to was the fight over gay marriage. From around early 2013 to the 2015 Supreme Court decision legalizing it nationwide, I was baffled by the opposition. There was an uproar among GOP politicians and conservative commentators who warned of the looming consequences of the gay rights’ victory. Then-prominent talk show host Glenn Beck predicted that “50%” of churches would “fall away” from legalizing same-sex marriage and countless major Republican politicians foretold of normalized beastiality, polygamy and pedophilia.

All of these predictions were, unsurprisingly, completely wrong. More than six years since the Supreme Court’s landmark decision, we haven’t seen a mass destruction of Christian places of worship. People continue to correctly recognize pedophilia as humanity’s greatest sin, polygamy remains a practice for conservative Mormons that the rest of us raise our eyebrows at, and beastiality has steered nowhere closer to the mainstream. One of the only effects same-sex marriage seems to have is fewer young people killing themselves.

There’s been no greater example of how brutal the loss has been to the right than the American public’s response to the fight. Support for gay marriage has risen from a meager 27% in 1996 to an astonishing 70% today, including, for the first time, a majority of Republicans. Here in Nevada, adding gay marriage protections to the state constitution was voted on for a state referendum. “Yes” on that referendum outperformed Joe Biden by 22 points, getting more than 62% of the vote, a stunning reversal from a time when a Democratic Presidential nominee begged voters to not see him as in favor of it. Now, even with a hard-right 6-3 Supreme Court, it seems unlikely that the decision will be overturned.

All of this is to say that the lessons the right should take from the debate seem obvious: don’t make insane proclamations you can’t back up. Don’t defend the sanctity and value of an institution if you want to prevent a significant part of the population from accessing that institution. And a tool that’s useful for you in the short-term can end up burying you in the long-term.

But progressives have their own lessons to learn from the ordeal. Namely, people are more willing to agree with you if you meet them on your terms. Many of the arguments for gay marriage were like this: Marriage is a fundamentally good institution, there is an inherent value in institutions that promote loyalty and tradition and gay people should be allowed to enjoy these institutions as much as straight people. Andrew Sullivan wrote what most consider the most important essay on the topic, arguably the article that brought gay marriage to the intellectual mainstream. “Since persecution is not an option in a civilized society,” he asked, “Why not coax gays into traditional values rather than rail incoherently against them?”

However, the gay rights movement was not always so unanimous in their agreement with this position. Many felt that “queerness,” broadly defined, was inherently radical and subversive, and that assimilationist moves like equal marriage rights would jeopardize their uniqueness. “Against Equality,” a formerly relevant far-left organization that prides itself on opposition to mainstream LGBTQ activism, boasts plenty of articles decrying it as failing to truly serve LGTBQ people.

The left should take note of which one of these sides actually won. The “assimilationist” side currently has the support of seven in 10 Americans, while the “subversion” side is largely confined to the timelines of radical Twitter leftists. The argument that marriage is some evil symbol of “heteropatriarchy” or whatever other academic buzzword hasn’t garnered any significant support – not just among Americans as a whole, but among gay America.

And liberals should remember that. The radicals may have had significant sway when defenders of gay people were a small, politically irrelevent share of the country. But as people have grown socially tolerant, “we’re just like you and would like to have the same rights” is a far more effective rallying cry than “burn it all down.”

I started this column off by calling the gay marriage debate a brutal loss for the right, which I still stand by. But in a weirder, less important way, there’s a somewhat strong case to be made that it was a victory – a successful crusade to promote marriage as marriage rates decline. More people being able to find a partner they love and raise a child in a loving, stable home, as opposed to bouncing from partner to partner forever. The traditional nuclear family (two parents with kids) being available to more people, not fewer.

So hey, cheer up conservatives. You may have lost the battle, but you very well may win the war.