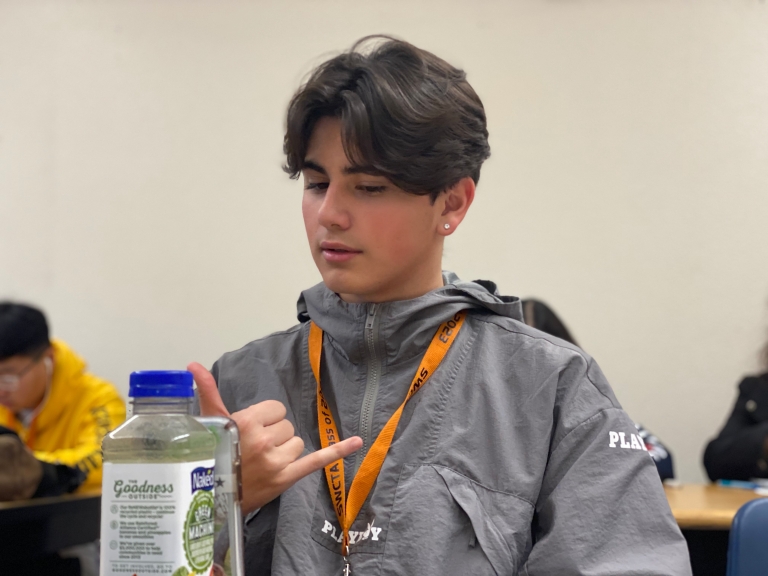 After setting up his phone on a juice bottle, freshman Eian Burge makes a Tik Tok to pass time. “I first started on Tik Tok towards the end of november,” Burge said. “I joined because my friends told me about it and how it’s the best app.” Photo Credit: Eian Burge

While taking a nap, he wakes up to the rapid pinging of notifications. As he picks up his phone, freshmen Eian Burge sees thousands of followers, likes and comments. A smirk spreads across his face as he immediately texts all of his friends and family.

After seeing his friends scroll through their Tik Tok feed, freshman Eian Burge decided to download the app and give it a try.

“When I first dowloaded the app, I didn’t know any of the influencers on my for you page,” Burge said. “I just saw all the different trends and did them in my own way.”

Burge was recording while using a filter that tells you which Disney character you resemble. After recieving the laughing hyena from The Lion King, his suprised reaction went viral.

“In the clip I said ‘I better get the prince from Aladdin’ and then when it gave me the hyenas I said ‘The disrespect’,” Burge said. “In less than 24 hours, it had hit two million views. I didn’t realize what was happening.”

“I feel 100% more pressure since I gained a [bigger audience],” Burge said. “I feel like I need to keep giving my followers content, so I will try to post multiple times a day.”

Since his viral video, Burge has had multiple other videos achieve over one million views. He collectively has 1.2 million likes on the app and 55.5 thousand followers.

“Eian has changed his personality, he’s more outgoing, confident and mature,” freshman Michelle Blaga said. “He’s been happier as a person since he’s blown up and gotten support.”

Burge encourages others to download the app and create videos they feel comfortable in. He hopes to continue growing his platform, despite the hate he may recieve.

“Honestly, laugh at the hate and don’t really take it personally,” Burge said. “And if you really want to blow up, don’t only do dancing videos.”