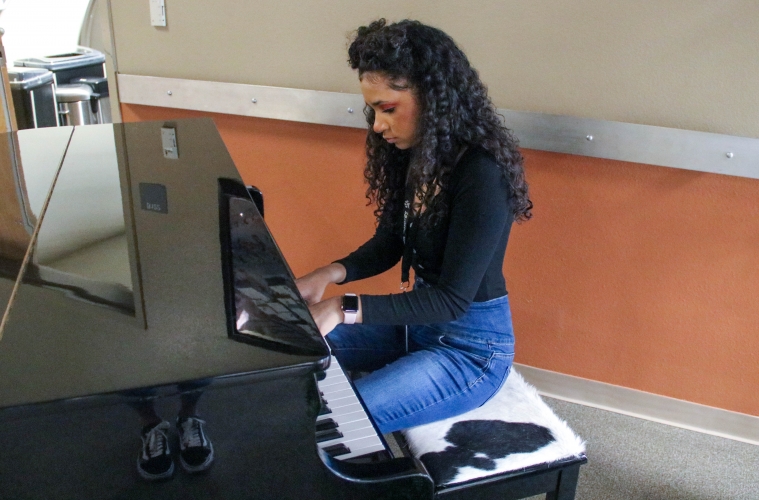 Sitting down at the piano, senior Kennedy Nelson plays one of her favorite melodies. “Whenever I play it helps relieve my stress,” Nelson said. “I am currently learning the upright bass and it’s very different than anything I’ve done so far.” Photo Credit: McKenna Thayer

As she sits down, she feels her soft smile grow bigger. She let her hands guide her fingers over the keys, producing soothing melodies.

Growing up with a father as a musician, senior Kennedy Nelson has always been surrounded by instruments from a young age.

“If I didn’t grow up surrounded by music, I don’t think I would’ve ever been inspired to learn so many instruments,” Nelson said. “Music plays a big role in my life in so many different ways. If I wasn’t so into music, I would have a harder time doing my other hobbies like dancing and choreographing.”

Nelson used to take piano lessons but stopped at a young age. Since then, she has taught herself seven instruments including piano, kalimba and three different types of guitars. She has also learned how to produce her own music.

“The hardest part about being self-taught was learning how to read music,” Nelson said. “Learning the notes can be confusing and then on top of that, you have to remember them.”

In her free time, Nelson practices playing for hours after school. She plays by ear or finds sheet music online.

“I’m so glad my daughter found music on her own just like I did when I was younger,” Father Keith Nelson said. “We do everything to support her and her upcoming career,”

After producing music and beats, Nelson combines them in order to make short songs to post on her Instagram.

“I usually don’t get nervous playing in front of people because I try to be confident in the instruments I’m learning,” Nelson said. “The first time I posted to Instagram, it was reassuring for me because people seemed to enjoy it.”

Although it can be hard to learn so many techniques at once, Nelson rotates between instruments weekly to reduce confusion.

“The one struggle I face is switching between fingerpicking guitar and ukulele to plucking and slapping on bass,” Nelson said. “They’re so different and the techniques are nowhere near the same. Sometimes, I’ll forget my form on any of them because of how much I played another.”

In the future, Nelson hopes to improve on her piano skills and grow her audience through her Instagram. In the meantime, she plans to continue choreographing to music for dance teams and posting her music.

“One of the biggest things in music is patience,” Nelson said. “Be patient and don’t worry. If you don’t understand now, you’ll understand later. Be consistent and don’t be afraid to use the internet.”