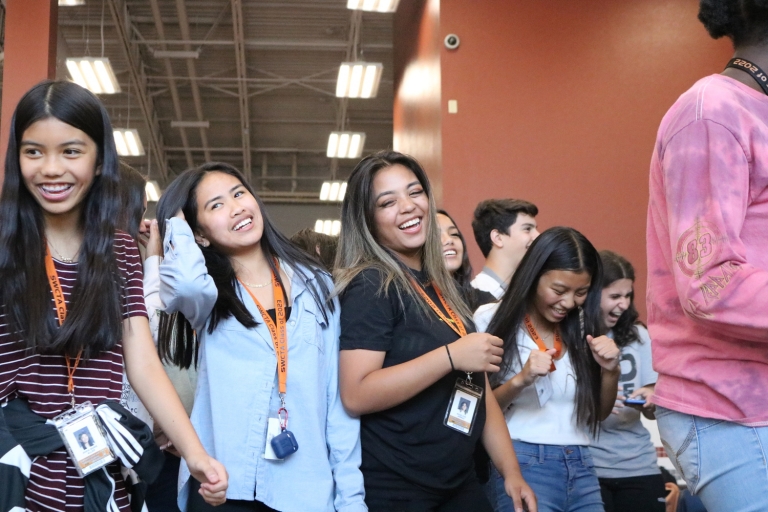 Laughing during the meeting, freshmen Angelene Juardo, Samantha Manuel and Aylana Paculan practice their cheers. Key Club prepared for RTC the last few weeks. “It’s all new to me since it’s my first year,” Juardo said. “I was nervous about joining Key Club, but as I’ve come to the meetings, I’ve seen how close everyone is and it seems like fun. I’m excited about the things we’re going to do.” Photo Credit: Clyde Hao

For their last meeting before the Las Vegas Regional Training Conference, the Key Club board has been preparing   their members by continuing to practice.

“Our new members do a really good job at getting the cheers down and making corrections where they’re needed and they’re super fast learners, [so] I applaud them for that,” Key Club Historian Casey Joseph said.

RTC is an event where Key Clubs from across the valley participate in workshops to improve the community. Additionally, all the competitors compete in a rally where the clubs perform cheers and the winner receives the spirit stick and win the title for their division. Last year, the school won the spirit stuck and their division.

“We won last year and it was a huge payoff for the work we put in during the meetings, [and] it was super emotional,” Joseph said. “Now that I’ve experienced a win there’s a lot more nervous anticipation and anxiety that goes into this next competition.”

To start building their community within an organization, the Robotics team did a small competition where students were required to create a claw out of basic materials, such as sticks and PVC pipes.

“It’s a way to introduce the recruits to a fundamental process that can be applied in any area of the team whether that would be the creation of the actual robot, to marketing for the team and to creating spirit items,” senior Justin Casuga said.

Members will present and test their claws during the meeting. Afterwards, they will begin to learn the basic skills they will need for the build season.

“The goal for this year is to establish a good foundation, so that when all the members that ran the club leave next year, there will be people that run the club without a problem,” Casuga said. “I have a good feeling about this year because many of the seniors in the club want to go all out for this year.”

After their first meeting of the year, the new Dance Club has begun to choreograph a dance to potentially perform at the homecoming game.

“I was tired of being on teams because I hated how they were run and I knew I’d like leading one better than being on [a team],” Dance Club President Kennedy Nelson said. “I’ve also gotten into choreography a lot recently and I have a lot of performance ideas that I’ve been wanting and trying to use ever since the end of freshmen year.”

The club was created this year and plans to perform at assemblies and other events. Members can also practice in a studio outside of school that will be rented out occasionally.

“The choreography was really stressful at first, but at the end of the day, it was overall enjoyable,” Dance Club Treasurer Kevin Boonna said. “Seeing our dance team coming together and mastering the choreography puts a smile on my face and makes the stress worth it.”