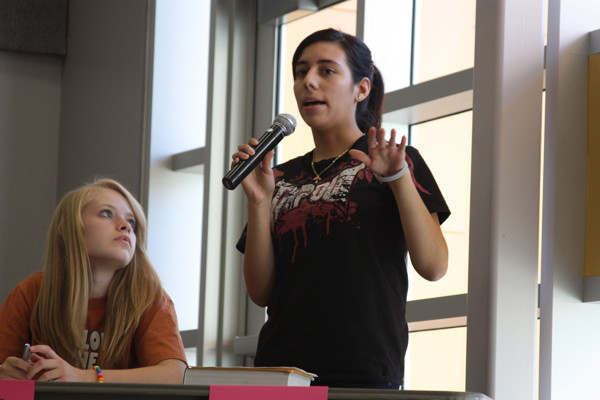 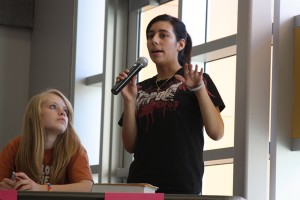 Southwest Career and Technical Academy’s first school-wide government called Coyote Congress met for the second time on Nov. 5, 2010 in the cafeteria to address issues and concerns of the student body.   The meeting started with reports and updates from program representatives.

“The purpose of major updates is to ensure that the students know what is going on in other majors. It is difficult for the average student to know what every single major is doing, so the updates allow each major to share the cool things they have done in the past month and what they have coming up that students can look forward to,” said Student Body President Corey Tyndall.

Additionally, club members can announce information and summarize their club’s past and future activities.

“I think it’s a great idea, but my concern is that I only talk to about 40 people [in the Congress] and not a lot of people outside the Congress get informed about the clubs,” junior Steven Lam said.

The remainder of the meeting was devoted to an open floor filled with student complaints, problems, and suggestions.  The topic on “bad teachers” became the most heated discussion.

“I do think that if students have a problem with their teachers [and their teaching skills], be mature about it and handle it well.  Talking about your problems to other students isn’t going to fix it.  If you truly have a problem, then go to a counselor or the actual teacher. Your education is your responsibility. If you have a complaint, don’t point out a name in public. It only makes you look bad,” junior Elisse Hadrianne said.

Others used the open floor discussion to have their opinions heard.

“When I was voicing my opinion, I felt so powerful. I felt like everyone was really listening to me and what I had to say.  Some people even thanked me because I said what they wanted to say, but they were too scared.  I did feel a lot better after I was done, because I felt like no one was judging me.  It felt good to get it off my chest; it’s like a therapy session almost except my thoughts are being put into action,” junior Kendall Pitts said.

After the Congress meeting, students separated by grade and went to different rooms for their class meeting.  The freshmen, sophomores, and juniors discussed class mottos, shirts, ways to fundraise, and other ideas for the year.

“It was productive.  We got a lot of work done, and I think the sophomore class will really like their shirt design,” sophomore Emerald Tran said.

Coyote Congress meets on the first Friday of every month, and all students are welcome to attend.  The next meeting will be on Dec. 3, 2010.