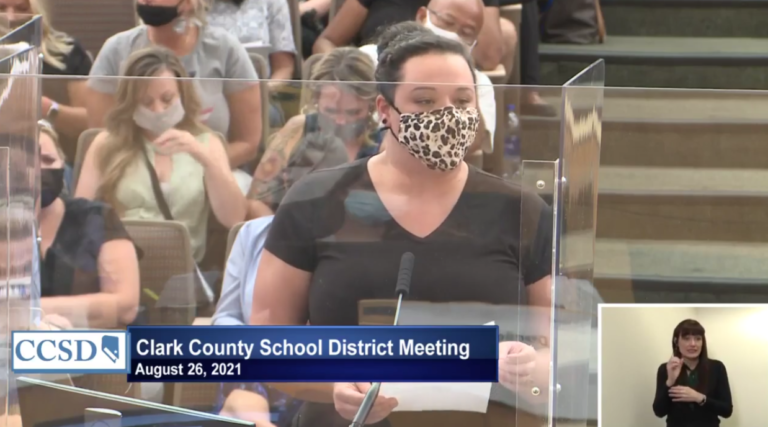 Paige Myers lays out her support for the anti-racist task force, while maintaining the position that the Board of Trustees wasn’t doing enough of a job in bolstering anti-racism. The primary point of discussion was the formation of their anti-racism task force, which became a lightning rod of division during the six hour meeting. “I feel compelled to lift the voices and the concerns of my fellow educators who are working within a system that is inherently broken,” Myers said. Photo Credit: Screenshot Credit: CCSD

A CCSD Board of Trustees meeting centered around the district’s new attempts to tackle racism at schools. Most notably, the discussion was largely focused on the formation of the “Diversity, Equity and Inclusion” task force, a group of educators and activists assigned with combatting race-based hatred and prejudice.

“As a parent and a mother, I’m here advocating for my biracial children, who deserve affirming and safe school environments that provide robust opportunities for them to learn,” Paige Myers, a supporter of the task force, said. “It should be a pressing priority to ensure actions are taken that show the organization’s commitment to anti-racism, and include a plan that lays out procedures that must be followed to uphold that commitment to the cause of dismantling racism.”

The decision to create the task force was made in June, following the signing of AB371, a law that mandates Boards of Trustees, in the state, implement boards to fight racial harassment in their respective counties. Interruptions and jeering repeatedly happened during the meeting, largely from the side opposing the anti-racism task force. A visibly frustrated Linda Cavazos, the president of CCSD Board of Trustees, compelled security to quickly remove interjectors, after being criticized by progressives at the last board meeting for failing to do so.

The task force was also criticized for controversial appointees, including Power2Parent, whose president allegedly called trans kids “mentally ill,” and claimed, without evidence, that gender transitioning healthcare caused “cancer.” Power2Parent has not responded to the Shadow’s request for comment.

“I don’t really trust CCSD with this anti-racism policy,” Kyle Rogers, a parent, said. “We have people like Power2Parent on this committee, who were very abusive to people during the gender-diverse policy [debate.] We had someone a little bit ago say that trans kids have mental illness, creating an unsafe environment here for trans folks.”

The meeting was filled with anecdotes of alleged racism and bigotry targeted at students of color. One Black student cited being the victims of slurs by both teachers and students. More disturbingly, representatives for the leftwing “1865: No Racism in Schools” organization pointed to a plot by white students to gun down Black students.

Opponents of the creation of the task force labelled its existence a distraction from other issues on which the district should focus.

Following the public comment period, a presentation on CCSD’s anti-racism policy was performed by Samuel Scavella, a former Associate Superintendent at CCSD. Scavella vowed to not have critical race theory be “a part of the discussions,” nor incorporated into any of the “professional learning opportunities.” It remains to be seen whether the task force fulfills the expectations of its supporters, or confirms the worst fears of its opponents.

“When we write the anti-racism policy, I hope we are not just focused on individual racist acts by students, and that we are also looking at systemic racism engaged by police, engaged by teachers, [and] engaged by policies that target our children,” Tonya Walls, Advisory Board member of the activist group “Code Switch” said.