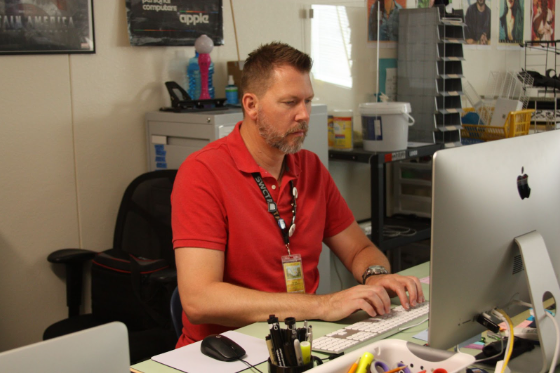 Maintaining a productive schedule, Jeffery Ball checks and responds to his emails. Ball will be moving to Nashville, Tennessee this summer. ”Some things that I will miss in Las Vegas is the fact that it’s great to have more entertainment and things more widely available,” Ball said. “Since I’m moving to a more rural area, I probably will miss the convenience of going five minutes down the road to a grocery or convenience store, whereas in Nashville, it may jump up to thirty minutes.” Photo Credit: Lucas Grubb

After working for 14 years in the district, Graphic Design teacher Jeffery Ball is finalizing his plans to move to Nashville, Tennessee.

“I chose Tennessee for many reasons, but the greenery in particular. That’s something we are missing from Las Vegas,” Ball said. “I have chosen to leave Las Vegas for several reasons, but mostly that I have lived here for 14 years now and Las Vegas has given me everything it can for my future. I don’t think there is anything more I can gain from this area, so I am moving on.”

“When I first got out here, it was the second year Southwest was open so everything we were creating was new and we got to create all the things you are all enjoying today,” Ball said. “So I think that’s one of the things I will miss most about working at SWCTA was being a part of a new beginning, and creating something that really didn’t exist in Las Vegas.”

Being a unique and energetic teacher, Ball has left a positive impression on many of his students.

“I like Mr. Ball a lot as a teacher, because he has been a fun and unique teacher,” Junior Xander Gisi said. “He gives us a lot of freedom for a lot of the projects he gives us, he doesn’t give a lot of instructions, unless you ask him, he seems to be very open for what you want to do.”

As the last few days of school are quickly approaching, Ball is most excited for the new opportunity that he has been presented with at Hendersonville High School.

“What excites me most is a new opportunity,” Ball said. “It’s like many of you as students are getting ready to go off to college and you’re going out of state,, it’s the mystery of the unknown and the idea of a fresh start – it’s always nice to start from scratch.”