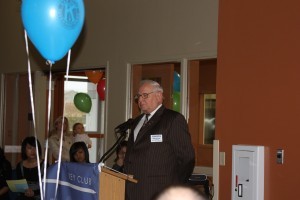 “I remember your president, Alyssa [Suphunthuchat], asking me if there will be Key Club next year,” Principal Felicia Nemcek recalled during the opening speech.

Kiwanis President Dick Richards and Sam Lybarger were also invited to speak at the event.

“Key Club is an international, student-led organization. The members learn about character building and leadership. Our motto is ‘Caring, our way of life,’” said Lybarger.

Following the speeches was the official installation of the chapter by Philip Tanlim, the lieutenant governor of Division 28-South. At the end of the installation, SWCTA’s Key club was recognized as an official section of Key Club.

The inducted members received a personal certificate, a membership card, and a pin. Because there were over 200 certificates to go around, the officers took a while to sort them out.

“We tried to make it organized, but there were too many people,” said sophomore Judy Jauregui, the vice president of fundraising.

Following the members’ installment were the closing remarks from the faculty advisors, Mrs. Miriya Julian and Ms. Laura Clark.

“I would like to thank the teachers who helped out with KEY Club. With over 200 kids, I think I would’ve gone crazy if it weren’t for their help,” Julian said.