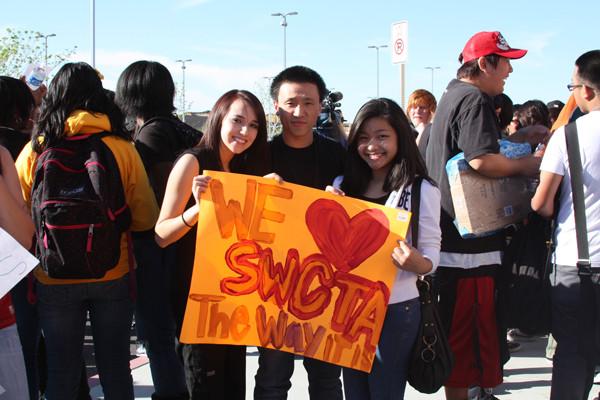 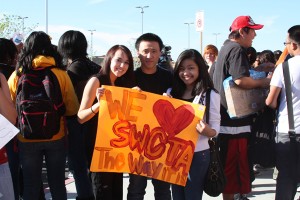 On March 15, 2011, over 350 students, faculty, and parents from Southwest Career and Technical Academy marched to Sierra Vista High School for one of four Town Hall meetings hosted by the Clark County School District.

“We want to start [the movement for education] off, but we want to challenge other schools to do the same thing,” comments junior Steven Lam.

CCSD School Board President Carolyn Edwards officially began the rally with an impromptu speech to the students and staff.

“I am very proud of what you are doing here,” Edwards said.

Students Corey Tyndall, Steven Lam, Billy Rom, and Tazia Statucki gave a speech to educate the students at the rally about the budget cuts. Principal Felicia Nemcek followed up the student speech by telling students how proud she was.

“Words can’t express how proud I am of our students, parents, and staff for their participation. I am truly fortunate to have a student body and staff that is so respectful, informed, and proactive,” stated Nemcek.

The students began the trek to Sierra Vista at 5:15 with CCSD school police escorts. Students chanted cheers to draw attention and awareness to nearby traffic.

“The walk symbolized our fight for education by letting the community understand where we’re coming from and that this is something that affects everyone and we can’t let this slide,” comments junior Jobely Alvarez.

The students arrived at Sierra Vista a few minutes before the meeting officially began. Students filled the back of the theater and were the first to speak at the meeting.

Members from the community were also there. Some proposed starting a local lottery to be used towards education. Another proposed parents paying for school or paying for transportation, with financial aid provided to those who qualify as lower income.

At the end of the night, school board superintendent Dwight Jones came to the meeting to discuss budget cuts and the importance of hearing from the public.

“You think about a $400 million cut for a corporation the size of ours, a lot of times they will be filing for bankruptcy,” commented Jones during the meeting.

A designated panel recorded the comments during the meeting and the school board will review the comments and suggestions at their next budget meeting on March 17th at Western High School.