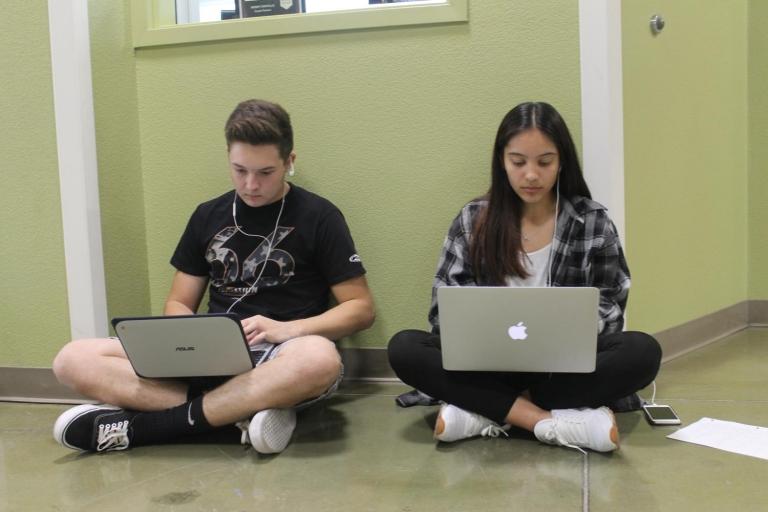 While half the class listens to a lecture inside, juniors Yahirda Peregrina and Mason Vigil finish a timed writing essay. Speech and Debate members wrote short rough drafts for their upcoming tournament. "In my opinion, this class has helped with my speaking skills which also helped with my confidence levels," Peregrina said. Photo Credit: Grinesa Bajrami

“For the showcase, I am working on a slam poetry [piece] that explains my side of anxiety, what I went through and how it makes me feel,” sophomore Ruth Daniel said. “I personally chose this because it’s something that not a lot of people understand and it provides my point of view.”

The performances will include showcases, where pieces are performed, and competitions, where students compete for a trophy, depending on how many members decide to perform in each category. Some categories include slam poetry, debates and oratories. Instead of the adviser judging the performance, faculty members will evaluate.

“I think that it makes sense Castillo will not be judging because he’d have a bias,” sophomore Jennifer Shelley said. “[However], from a student’s standpoint, I would love if he judged as well, but I still respect his choice.”

Since this is Speech and Debate’s first year as a club, members must view two rounds of a real competition of their preferred event at other schools and takes notes of what happens, mostly of structure and strategy.

“I recently went to Palo Verde High School to study how Speech and Debate works and I realized I really like the system,” junior Leslie Nguyen. “I liked how efficient, flexible and organized the system was.”

Members are encouraged to work on their showcase piece so they can compete in the novice next fall. In spring, members can only compete in the advanced category and few students have decided to compete this month, rather than wait.

“I plan to do a Lincoln Douglas [debate] because I think ethics and morals are interesting–they allow you to [be] passionate rather than only stating facts like a robot,” sophomore Ignacio Parra Parra said. “I plan to compete in the spring because I have confidence in my public speaking abilities from my experience in FBLA and being a waiter for most my life. I will admit it will be difficult, but that will mean victory will feel so much better.”