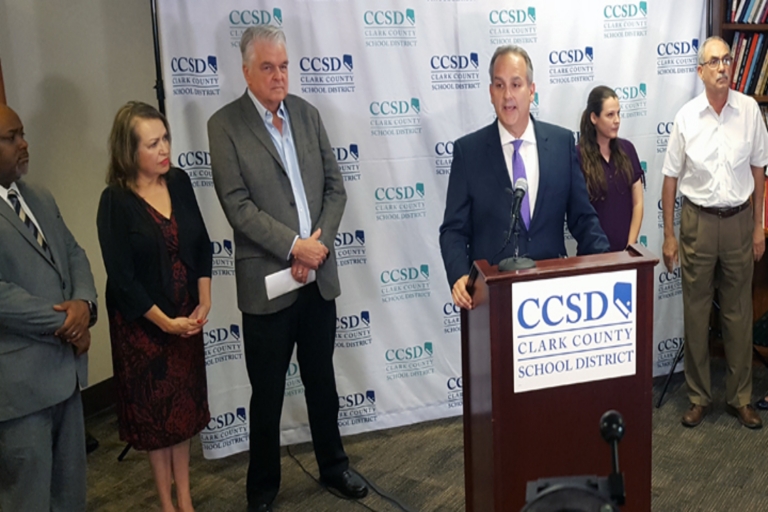 Explaining the situation, Superintendent Jesus Jara gives teachers their desired pay raise. A tense standoff between teachers and the CCSD occurred, which almost lead to a strike. Photo Credit: CCSD

“It is the right thing to do for our staff and our students,” CCSD Board of School Trustees President Lola Brooks said. “CCSD is committed to ensuring our staff is compensated for their hard work in the classroom every single day.”

The tension between the two parties started when the school district claimed to back down from the previously agreed upon financial terms. While CCSD had abided by the 3 percent increase in teachers salaries that was promised, unions claimed that they tiptoed around the extra pay raises for teachers who have finished professional development plans, and are thus eligible for an approximate $5,400 raise.

“It’s not fair, it’s not contractual and if we’re going to start contracts and have a mutual agreement of labor versus the board, it needs to be agreed upon and then followed through,” US History teacher Jessica Kelly said. “There are a lot of teachers [that put] effort into these credits and [were] told they were gonna get money for it, and [they’re] not, [and that] is not fair.”

The school board claims that they can maintain the promised salary increases without any cuts to schools because the district revenue projections have been more positive than expected.

“I’m happy that teachers got the contract that they were hoping for. They do work hard and they deserve the money that they get, how little of it there is,” Principal Donna Levy said. “I am concerned, however, where the money is coming from. I hope it’s not coming from our general funds or our school budget because we’re already in a world of hurt.”

With the new contract granting the teachers’ union all of their demands, the strike planned for September 10 has been cancelled.

“I wanted [the strike] to happen because I think it needed to happen, just to let people know that education in terms of a profession actually is important,” English 9 teacher Mike Moore said. “Adversely, the effect of not having people report would affect kids, and that’s a bad deal.”

However, the teachers’ union still claims that the ordeal revealed a larger problem in regards to the district’s funding of schools.

“I really think this is a narrative that highlights the structural problems for funding our schools,” John Velladirta, executive director of the Clark County Educational Association, said. “It’s really about making significant improvements so that we get the appropriate resources, and hopefully that takes place during the next legislative session.”