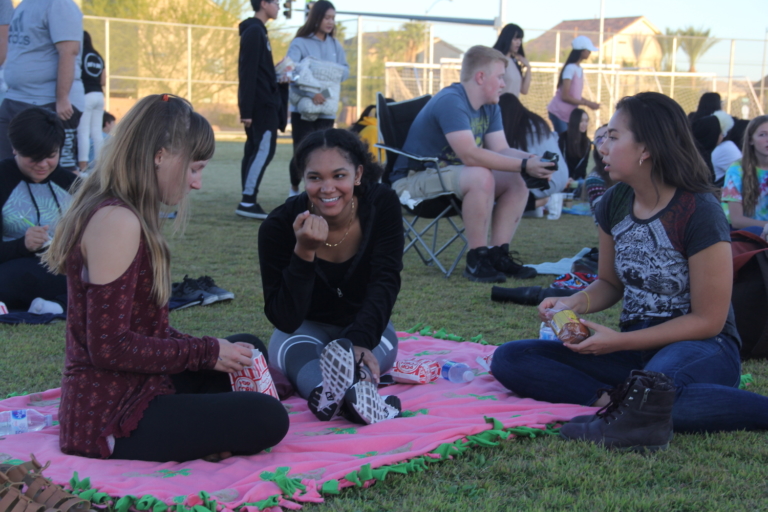 Enjoying a snack before the movie starts, junior Simone Enen and her friends share laughs with each other. Movie night doors are planned to be opened at 6 p.m. Photo Credit: Grinesa Bajrami

To fundraise for homecoming, the annual movie night will be held on Friday at 6:15 p.m. on the field.

“Something that is different is that this year student council came up with movies and then we put it to a school wide vote,” StuCo advisor Miriya Julian said. “This is also I think the first year that the movie isn’t animated. I also bought the sing along DVD so maybe people will sing along.”

After the student body voted, ‘The Greatest Showman’ won. Other movies that were eligible included Coco, Shrek, Coraline and Big Hero 6.

“Movie night allows people to hangout together in a safe setting at school,” StuCo member Stephen Bingham said. “A lot of kids don’t get to hangout with friends outside of their classes, so this is a fun opportunity for people to actually enjoy themselves.”

At lunch, tickets will be sold on the stage for $5. Students can also buy from any StuCo member. With the ticket, students will be given a bottle of water and a bag of popcorn. Although snacks will be provided, students are able to bring food from other restaurants.

“I decided to go to movie night because I wanted to participate in school activities and be active,” freshman Lexie Walker said. “I voted for ‘The Greatest Showman,’ so I’m excited to watch the movie. I’ll probably end up screaming the lyrics, as everyone sings along.”

Since Movie Night will be held on the field, students will be allowed to bring blankets, pillows and chairs. Students are required to bring their IDs to the event.

“We have been doing movie night for years, for us we use it as a kickoff for homecoming, it’s a fundraiser for Stuco,” Julian said. “We have a lot of expenses before homecoming and so we use it partly as a fundraiser, partly to build spirit and community at school. I have never seen it, I am super excited to see it. A lot of teachers haven’t seen the movie either, so this is a good excuse to hang out.”