United States President: Trump vs Biden? Each candidate has convincing views, but which views will win the election? 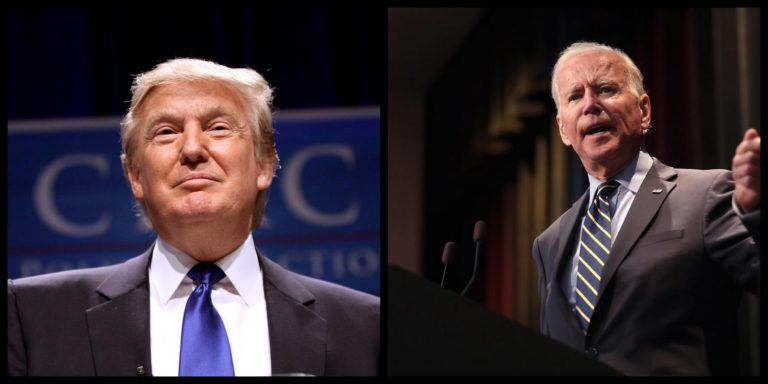 I will admit that President Trump has been one of the most controversial presidents in the history of the United States. It is a bit hard endorsing someone whose morality has been questioned by millions of people these past few years. I’ve even thought about endorsing his opponent Joe Biden for the sake of my reputation. This issue of honesty has been echoing in my mind for a few days, but writing for the newspaper has taught me one thing: to be brutally honest. Overall, his first term was good for both the economy, taxpayers, and national security. He stands for America, because America should be first.

Let’s take a look at the economy’s health under President Trump’s first term. From the start of Obama’s second term in January 2012, the Dow Jones Industrial Average, an index of the most wealthy and stable companies in America, was topped out at 12,359 points, ending his term at 19,963 points, at which President Trump started his term with). The difference comes out at a whooping 7,604 points. Today, the Dow Jones stands at 28,201, resulting in a difference of 8,238 points. This came after the devastating blow the index suffered through after the COVID-19 pandemic began to take place.

President Trump is still taking a hold of unemployment rates, delivering an amazing 3.5% unemployability rate in February and an improved 7.9% rate considering the toll that the pandemic had on American labour. Finally, average salaries have increased under President Trump, with an average of $29.47 per hour compared to former President Obama’s $26 salary in 2016. He also insured a Corporate Income Tax Rate cut, which is misunderstood to be a terrible thing for taxpayers. In reality, it grows our economy by 1.7%, increases salaries by 1.5%, and puts 339,000 full-time jobs in total.

Another key topic in our country today is healthcare. President Trump, in 2017, approved one billion dollars through the Department of Agriculture to improve healthcare access to 2.5 million rural citizens. He opposed the “socialist” Obamacare (Affordable Care Act), which “caused premiums to more than double in the individual health insurance market – where the self-employed and many without workplace coverage purchase insurance,” and is currently trying to reverse its effects on the middle class Americans.

These actions have contributed to the spread of healthcare options nationwide, giving individuals the opportunity to choose who they want coverage from. As for generic drugs, President Trump has hurt big pharmaceutical companies by attempting to implement through executive orders a common idea endorsed by both candidates to save $30 billion for seniors with Medicare “D” discounts, increase access to insulin and epinephrine to millions of patients at a cheap cost, and to make sure Medicare patients and seniors pay no more than other countries when it comes to Medicare “B” prescriptions.

A huge basis for President Trump’s agenda in 2016 was national security, mostly the national border between the United States and Mexico. Mexico has a problem with drug cartels, such as the Sinaloa cartel, infamous for drug trafficking and mass  cocaine production. Statistics show that “since 2009, heroin seizures at the southwest border have almost tripled, while meth seizures quintupled through 2014. Worse yet, cocaine and marijuana remain two of the most commonly seized drugs along our southern borders, equating to millions of pounds seized by U.S. Border Patrol.” President Trump has made efforts to prevent these violent cartels from crossing the border by 30 feet walls along the border. So far, he’s built 324 miles of wall. At first, that may not seem like much, but it narrows the cartel’s routes and helps the Border Patrol focus on other sectors of the border.

He’s also focused on Chinese and Middle East relationships. He’s actively trying to centralize manufacturing back in the United States, providing us more jobs and removing our debt to China. Tariffs have been imposed to reduce the amount of product coming in from China. These tariffs supply our country with more money, encourages localized manufacturing, and grows our economy stronger. In the Middle East, he helped to initiate the Abraham Accords, a peace deal between Israel, United Arab Emirates, and Bahrain. He’s pressured terrorist groups such as Al-qaeda and ISIS by closing in on their forces and killing the ISIS leader Abu Bakr al-Baghdadi. Troops from Syria have also been pulled out under his administration to reduce our casualties for something that shouldn’t be our problem.

Overall, it is true that Trump has morality issues that may cost him the election. I will admit that he has civil rights and name-calling issues. But it doesn’t really outweigh his political impact for me. The President holds conservative ideals that I agree with and has plans to implement these conservative ideas further. Joe Biden doesn’t have the touch needed to defeat Trump’s confidence. One thing is for certain: this election may just be one of the most important elections in the history of the world.

After months of what seemed like never-ending personal attacks and exhausting news cycles, the 2020 election season is nearing its end. On November 3, or possibly the days and weeks after, Americans have the opportunity to repudiate one of the worst presidencies in the modern era. On virtually every issue, America is worse off because of President Donald Trump’s leadership. I endorse Joe Biden, not because Biden’s record is pristine and certainly not because his administration would be perfect, but because his policies are better for the American people.

The number one argument of the Trump campaign, is that you have to vote for him because of the strong economy that he built, is a lie. It’s not an exaggeration, or a different interpretation of facts, it is an outright lie. Just take a look at the unemployment rate that the President loves to tout; it’s been falling since June of 2009, following the Great Recession, and continued to fall for nearly eleven years. The rate at which it fell hasn’t accelerated under Trump. If anything, it’s slowed. Even if you don’t count 2020 because of the coronavirus pandemic, job growth was stronger under the last three years of the Obama presidency than the first three years of the Trump Administration, and job growth and stock gains were about the same.

That brings us to the largest legislative accomplishment of the Trump Presidency-the 2017 “Tax Cuts and Jobs Act.” Slashing the tax rates for large businesses and wealthy heirs and Americans, the bill failed to fulfill its main promises-namely, generating economic growth and business investment. The vast majority of the gains from the bill went to the wealthiest Americans, and worst of all, the bill actually cut taxes for businesses shipping their jobs overseas. That’s right, America’s self-described “nationalist” President is proud of making it easier for your boss to ship your job to China.

This is just the start of an economic record that largely puts wealthy elites over ordinary Americans. He’s all but eliminated the Consumer Financial Protection Bureau, an agency whose purpose is to protect Americans from predatory financial institutions. He’s made it more difficult for veterans to have their student loans forgiven when they’ve been taken advantage of. He’s prosecuted fewer white-collar crimes by elite businessmen and women, and made it easier for employees to steal their workers’ money. He’s attempted to slash billions of dollars from social security and medicare. His administration is in court *right now* to eliminate the Affordable Care Act, a move that would eliminate insurance for millions and allow insurance companies to raise prices on people with pre-existing conditions. These conditions include cancer, diabetes and the trauma from domestic abuse.

The most obvious instance in which the president has sided with big business in industry over ordinary Americans is environmental regulations. On environmental regulations, Trump has done the bidding of the fossil fuel industry, slashing regulations preventing companies from poisoning our water and air. While the slashed regulations likely fattened the pockets of oil and gas CEOS, they’re on track to poison and kill hundreds of thousands of people.

All of this is missing what is going to be the most important domestic policy area this election: the pandemic. I’ve written extensively on Trump’s failure to contain the virus, so in short: Trump lied about the threat that the virus posed, failed to establish a national testing and tracing strategy that could have caught cases early and continues to deny the effectiveness of masks. This all culminated into a super-spreader event at the White House, infecting the President’s allies and leaving the man himself in the hospital. While we should all be happy that he’s better, it’s actually remarkable that he seems to have shown zero humility following his hospitalization.

Trump’s track record has been a civil rights nightmare too. In what I would argue is the most disgusting move of his presidency: he prohibited trans individuals from serving in the military. There was no actual national security rationale behind this motive and no explanation as to how this decision made Americans “safer”. It was a discriminatory decision that echoed Woodrow Wilson’s segregation of the military almost a century prior. He’s also appointed homophobic zealots to important positions, rolled back police oversight reforms to mitigate abuse, pardoned a war criminal who murdered a little girl, and encouraged the shooting of journalists.

The president’s domestic policy is nightmarish enough, and his foreign policy hasn’t been much better. Foreign trust in US leadership has plunged at the start of the Trump presidency, and his efforts to fix that have been less than pristine, to say the least. The most important decision of the Trump administration, withdrawing from the Iran Nuclear Agreement, means that Iran is more likely to acquire a nuclear weapon, increasing the risk of nuclear war for Americans. Drone strikes, which overwhelmingly kill innocent civilians, went up about 432% in the first months of Trump’s presidency, and the president has cut transparency regulations in place to let

To reiterate, none of this is to say a Biden presidency would be perfect. But it would without question be way better. Even the right-wing American Enterprise Institute admits that Biden’s tax plan wouldn’t raise taxes on the bottom 90% in 2021 when first enacted, would raise significant revenue from wealthy Americans, and have no negative effect on growth. He has a smart plan for bringing manufacturing back from China to America, would expand social security and the Affordable Care Act, put in place tougher environmental regulations, rollback the discriminatory trans military ban, and substantially cut child poverty. Vice President Biden would also get us back in the Iran Deal, a key step to preventing nuclear annihilation.

The Trump presidency is without a doubt an utter failure-from deficits, to unemployment, to violent crime, resulting in the past four years being an abject mess. However, Biden’s largest appeal to many voters isn’t any of his policies or parts of his track record. Instead, it’s his promise to decrease tensions and end the divisiveness of the Trump presidency. This very well may be the most attractive reason for kicking Trump out of office. In any case, the argument is indisputable: You should vote. And you should vote Biden.