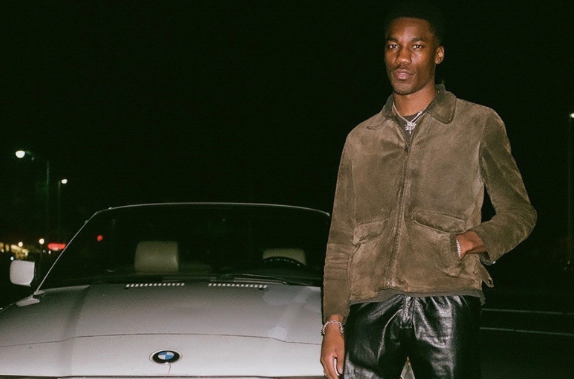 Upcoming R&B/Soul singer, Giveon’s new EP, ‘When It’s All Said And Done’ dives into a ruminative narrative of relentless pain that comes with being in an unstable relationship.
Rating: A+ Photo Credit: Carl Lamarre

TikTok has become one of the main social media platforms used by teenagers today and with the help of the creators accompanying their videos with specific music clips, many under appreciated music artists have started to gain popularity. Not only has TikTok provided a safe space for content creators, but helped jumpstart many artists’ careers such as Giveon with his collaboration on “Chicago Freestyle,” with Drake.

Originally from Long Beach, CA, Giveon Evans is taking the concept of “slowed+reverb” songs and incorporating them into his songwriting and vocalizations. Crediting his mother for his musical capabilities, Giveon spent most of his childhood learning music and looking up to artists such as Frank Sinatra. His debut album, “TAKE TIME,” released in March of 2020, has a similar theme of bittersweet love with a rhythmic guitar background and airy yet fragile vocals. And on his new EP, “When It’s All Said and Done,” there is a faster beat in the background with the lyrics resembling a dialogue happening between two people rather than focused on poetry like many other artists.

Diving into the intro, Giveon methodically characterizes the frustration that comes with breakups. On the track, he sings “Not proud I called you for the fifth time / I just gotta quit trying for you baby,” setting the tone for the four tracks on the EP. He depicts the many stages of a breakup, portraying a narrative about adolescent love and hardships. This introduction to his mellow voice, paired with the piano keys is the perfect combination for a heartbreak and R&B vibe to begin the album.

“Still Your Best,” starts off with an encapsulating guitar solo. Giveon immediately catches the listeners attention when he sings, “Are you serious? / Are you kidding me?” By doing so, Giveon questions his partners’ choices and portrays the toxicity within the relationship, such as when he sings, “That’s a downgrade and you know it // Still your best.” Compared to “LIKE I WANT YOU,” from his debut album, where Giveon wholeheartedly vocalized how it felt to want someone, in “Still Your Best,” he shows the egotistical aspect of a person when their partner starts dating someone new.

“Last Time,” is a collaboration with Snoh Aalegra and instead of using poetry to illustrate how hard it can be to give up an intimate connection, he communicates it by singing it as an informal-type conversation over the phone. In the chorus, Aalegra and Giveon sing together, “Just this last time / Don’t make me regret it / I don’t want to say it/ Let’s not overthink it baby,” making the listener question if “Still Your Best,” was more of an egotistical facade, rather than what Giveon truly meant.

The last track, “Stuck On You,” is a personal favorite and the final chapter to his toxic relationship. On the track, Giveon sings, “It took some time but I realized / You do me wrong but it feels right / Feels like I’m stuck on you.” His soft, yet unbearable heartbreaking voice, fits the ambiance as he tries to portray a story, where although the relationship feels like an inextricable link, there is only pain and he needs to start using logic rather than sticking to emotion. This song is more upbeat compared to the other tracks on the EP, but with the melancholic and captivating vocals, he puts the listener into a whirling loop of contemplative thoughts.

“When It’s All Said And Done” not only allows the listener to escape into deep thoughts regarding the pain in a heartbreak, but acts as a medicine, helping heal the many scars left behind in relationships. With this EP, Giveon expresses a chapter of his life and with the somber lyrics connects to the audience in a heartfelt manner paving his way into the R&B industry.