Jump into the military-themed action of ‘One Shot’ The thrilling tale of a Navy Seal, CIA agent to retrieve a prisoner 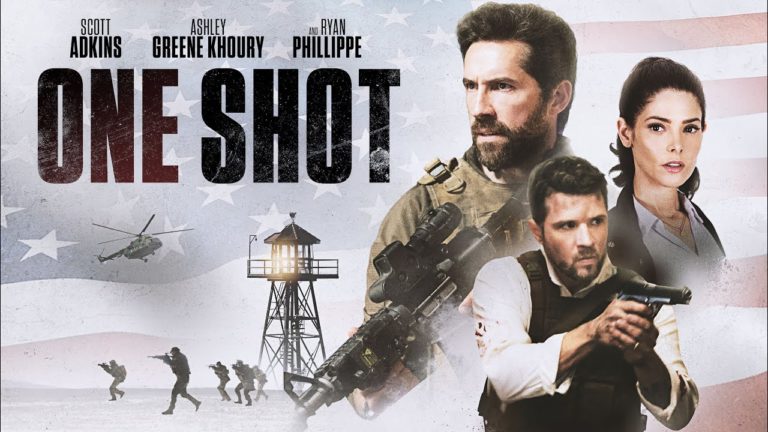 “One Shot” is a decent movie with impressive cinematography and energetic special effects. Rating: C Photo Courtesy of Signature Films

“He is our one shot to fix everything,”  a junior CIA agent named Zoe Anderson (Ashley Greene Khoury) says during the film. SEAL Lieutenant Jake Harris (Scott Adkins) needs to help Anderson retrieve information from a detainee on an island prison. Harris and his squad are given an emergency task to fly her to the high-security island and immediately airlift detainee Amin Mansur (Waleed Elgadi) off the island. Mansur is suspected of having intel on a planned bombing in the US. Before they can remove him, however, the base gets infiltrated by armed rebels, under the command of a group of mercenaries and their leader, Hakim Charef (Jess Liaudin). Suddenly, everyone is fighting for their lives and are unable to leave the island.

“One Shot” is filmed in one take, though there were two or three scenes that looked like they may have been edited to bridge another scene. However, the movie lives up to its title with the intricate filming style and little to no foreshadowing about what comes later on. This factor kept me in a constant state of suspense because if something was out of the line of shot, there was no alarm or signal of trouble. At certain times, the camera only follows the perspective of one person, making it feel like a documentary.

One of my favorite scenes was when Harris was alone, looking for the mercenaries. In this case, the camera follows Harris, and immediately pivots behind him where we could look over his shoulder and revert back to his face. This added a shiver of anxiety as the only way I could see what was going on around him was if he turned around.

The film lacks character depth and plot development. If the cinematography or the fact that it was filmed in one take is removed, the movie is mostly uninteresting. The intentional lack of editing and improvised moments remove many of the cliches that typical action movies lean on, but it also shows how the actors are often overreacting in scenes. There’s a dull pattern of action, arguments, gunfire and explosions. Towards the end, “One Shot” begins to simply drag on, feeling much longer than it actually is. Eventually, the one-take part of the film is unnoticeable, ultimately feeling like an over the top explosion filled video game.

As for the script, it’s filled with empty dialogue that feels extremely rehearsed. While it feels like there should be takes on patriotism or on America’s war on terrorists, it does not happen. Along with the dialogue and overall story line, the soundtrack is ill fitted. Composed by Austin Wintory, who also made music for “Assassin’s Creed” and “The Banner Saga,” did not have a positive effect on the movie, as it was boring and often covered up by the sounds of gunfire.

When I first looked at “One Shot,” I thought it would just be another plotless action movie with explosions and gunfire every thirty seconds. However, I was surprised with the certain theatrical quality the movie had. The cinematography is stunning at times and feels realistic, but the movie does seem to neglect its characters. However, if you’re looking for a movie that feels like a first-person shooter game, packed with action, you should check out “One Shot.”