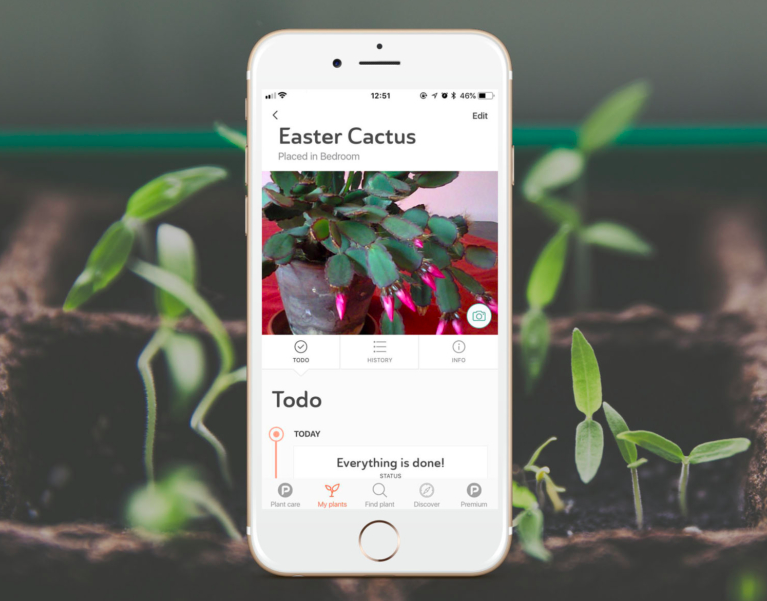 For many gardening beginners, taking care of plants can be difficult, and sometimes the plants die. With the “Planta” app, gardeners will become a lot less likely to kill a plant. The app finds suitable plants for ones’ home and reminds them when it’s time to water the plants.
Rating: B- Photo Credit: Kayla Thomas

Taking care of plants can be time-consuming. Plant owners must do plenty of research on the requirements for them, such as the hours of light, and the amount of water and space that the plant needs to survive. It can be stressful searching the internet for the right information. With the app “Planta,” all of the information is in one place. Plus, it’s free to download. The app has care plans for every kind of plant, including cacti, succulents, vegetables, herbs, flowers and foliage plants.

Once users create an account, the app prompts them to add their first plant to their collection. When choosing a plant to add to the room, it asked for several elements, such as the site of the plant, type of plant, type of pot it’s in, amount of light the site receives and if the plant had been repotted. The app also has the option for users to take a picture of their plant so they can distinguish the various types of greenery.

After the plant is added, the app describes the plant’s needs in the information section. This included several care categories like water, liquid fertilizing, humidity, cleaning and the toxicity of the plant. The app also gives a general overview of the plant like its scientific name, lifestyle and dimensions of it. It lists the information in a fundamental way including graphics to go along with them.

The app is helpful in that it shows the information about the plant in a way that’s easy to understand, but after scrolling through the plant information, it was surprising to find that the app had little knowledge of certain greenery. After adding several plants to the collection, it was alarming to find some areas like toxicity simply stated that there was no information about it. Users are here to get gardening advice and learn about the plants they have, and the lack of information defeats the purpose.

A positive of the app is the page setup is descriptive and straightforward to follow which is helpful for both verbal and visual learners. Another pleasant aspect of the app is the variety of methods for plant care. There’s no “one-plant-one-way” process, it’s customizable to the gardener’s needs, while still keeping the plant alive. Compared to care routines on the internet, this app allows for much more flexibility.

“Planta” also has a premium feature that includes a plant identifier, plant recommendations, a light meter and more. The plant identifier is a feature that determines what kind of plant it is based on a photo. The light meter works the same way except it measures the amount of light at the plant sight. Different subscription options range from $7.99 a month, $17.99 for three months and $35.99 for 12 months.

Given the steep pricing for only a few extra features, it doesn’t make sense for users to break the bank with a subscription. Although the light meter is a theoretically sensible feature, users know how much light is coming into the room, so it’s not something they need to pay for to get accurate information. The plant identifier is a beneficial idea, but it should be a free feature. It would make sense to allow all users to access this feature because if they can’t figure out what plant they have, it would be pointless to get the app altogether.

“Planta” could definitely improve. The subscription is costly, it doesn’t include all plant information and it only reminds users when to water their plants. The basic idea is there, but developers could make the resource more unique by adding free features that help gardeners with information they couldn’t just look up a solution for. I wouldn’t recommend this app for most people, but it’s not a bad option for people who just forget to water plants.

The “Planta” app is available on Apple and Android devices and has a 4.8-star rating on the App Store.
Could not load the poll.