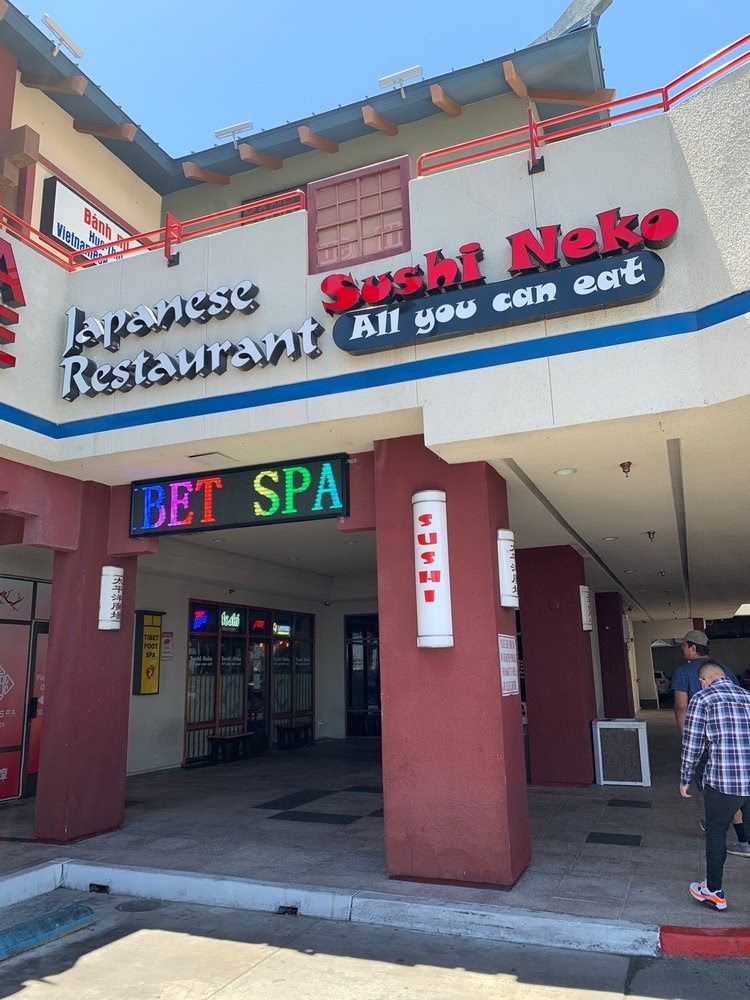 Established in 2015, Sushi Neko has become one of the most popular sushi bars in the Las Vegas area. Their sister restaurant, Sakana, was regarded as one of the “Top 10 Best All You Can Eat Sushi in Las Vegas” so it was a no brainer to go ahead and try Sushi Neko, as it was more in my area.

Sushi Neko is a local Vegas restaurant and has been loved by many throughout the years. They offer both  all-you-can-eat, priced at $21.95 for lunch and $25.95 for dinner, as well items available a la carte. They are usually busy throughout the day, and as soon as I walked in, it was packed. Upon stepping inside, my temperature was checked immediately and I was also offered hand sanitizer. Although it seemed like a full-house, all tables were still six-feet apart and servers cleaned the tables after every seating.

For my appetizer, I tried the baked green mussels ($3.95). A single order came with three mussels topped with an Asian cheese-mayo, fish roe and sprinkles of green onion. The first flavor I tasted in my bite was the cheese-mayo. I didn’t expect it to taste like anything different compared to previous green mussels I’ve tried, but it definitely exceeded my expectations. The cheese-mayo felt like a cloud filled with various bursts of flavor containing a perfect combination of both the cheese and mayo baked to a yummy yet slight crust. As for the mussel and fish roe, I didn’t really taste much as the cheese-mayo kind of overwhelmed the other flavors. Although it would’ve been nice to individually taste each component of the dish, it still topped other baked mussels I’ve tried. 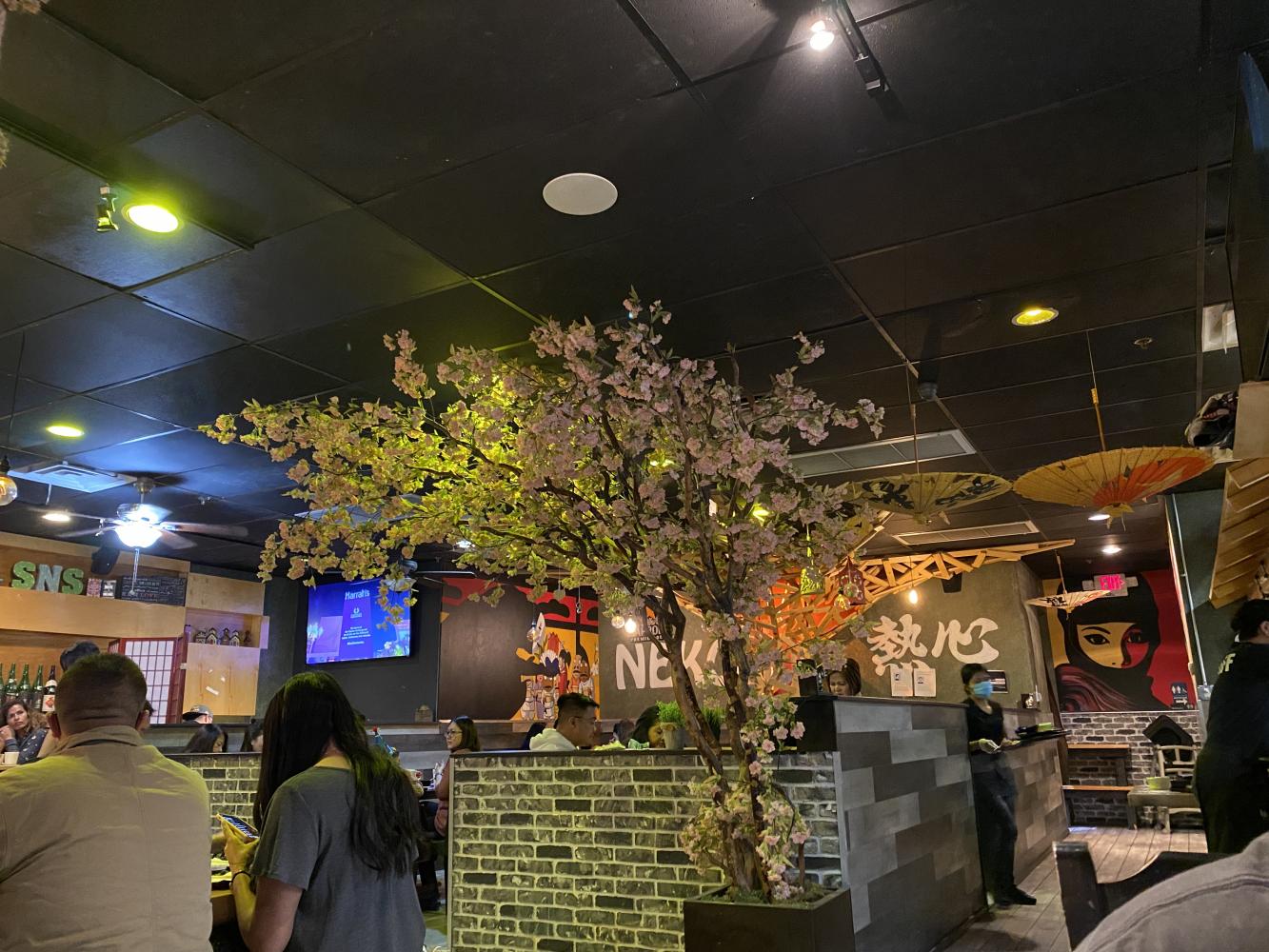 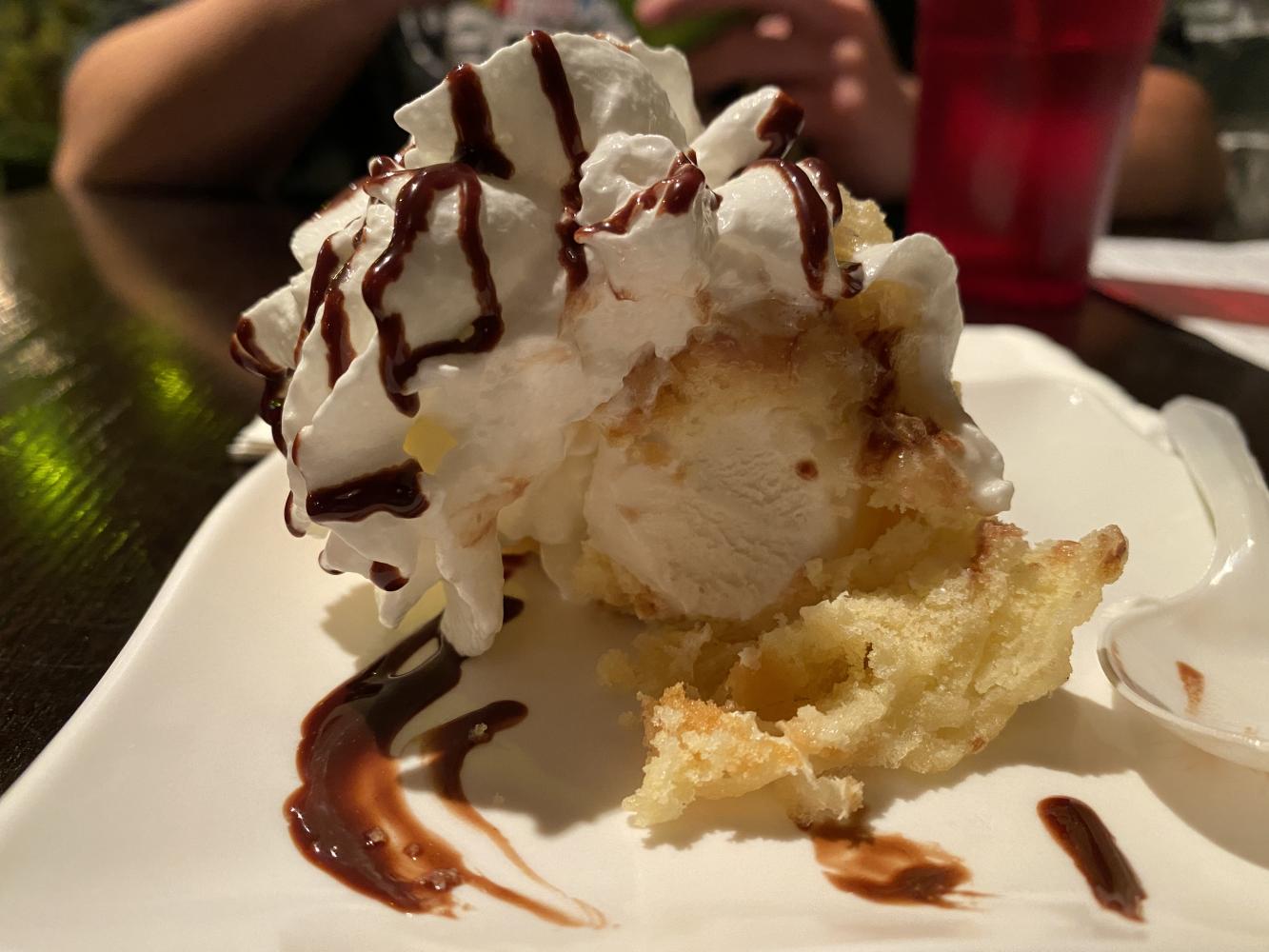 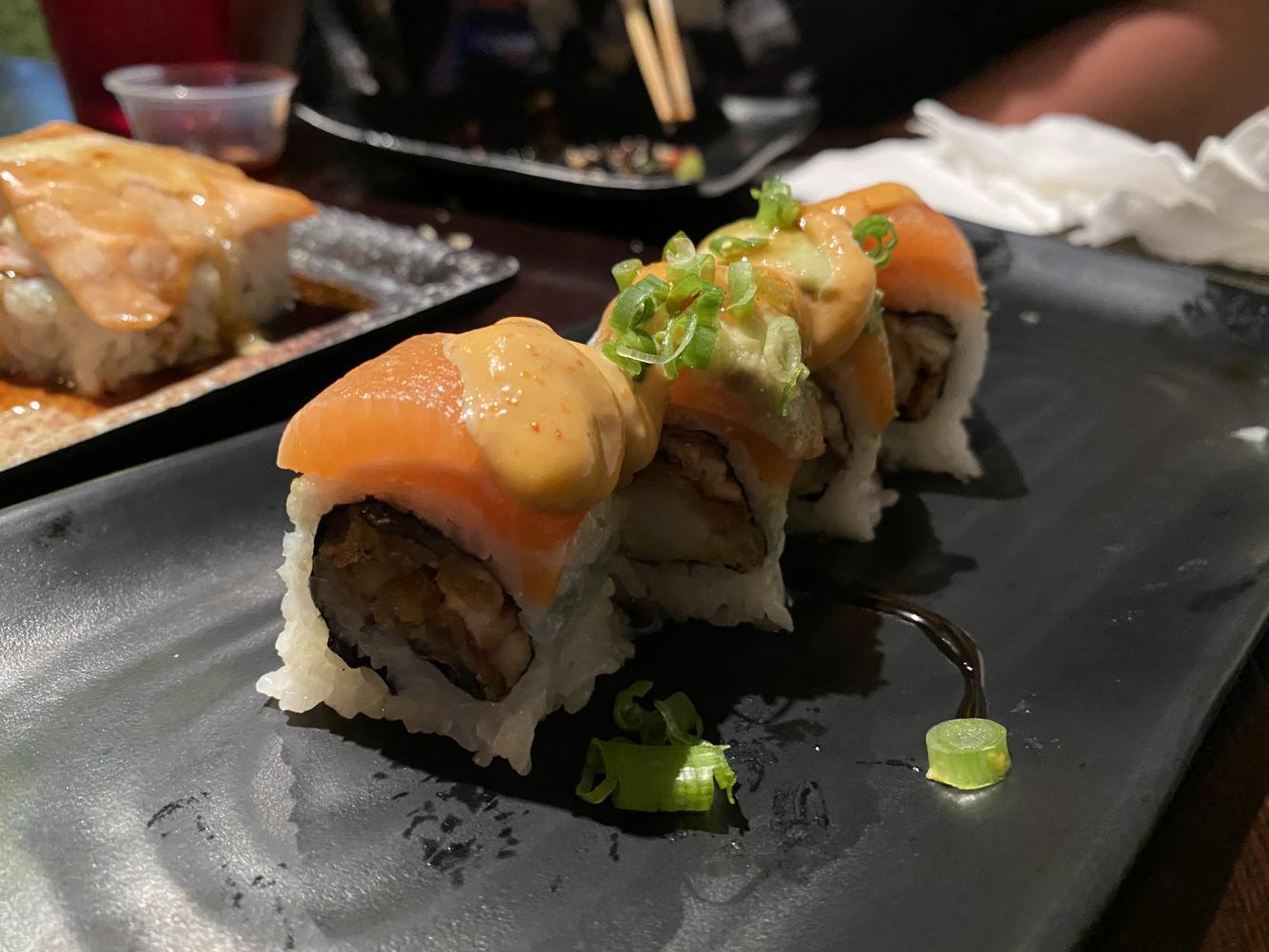 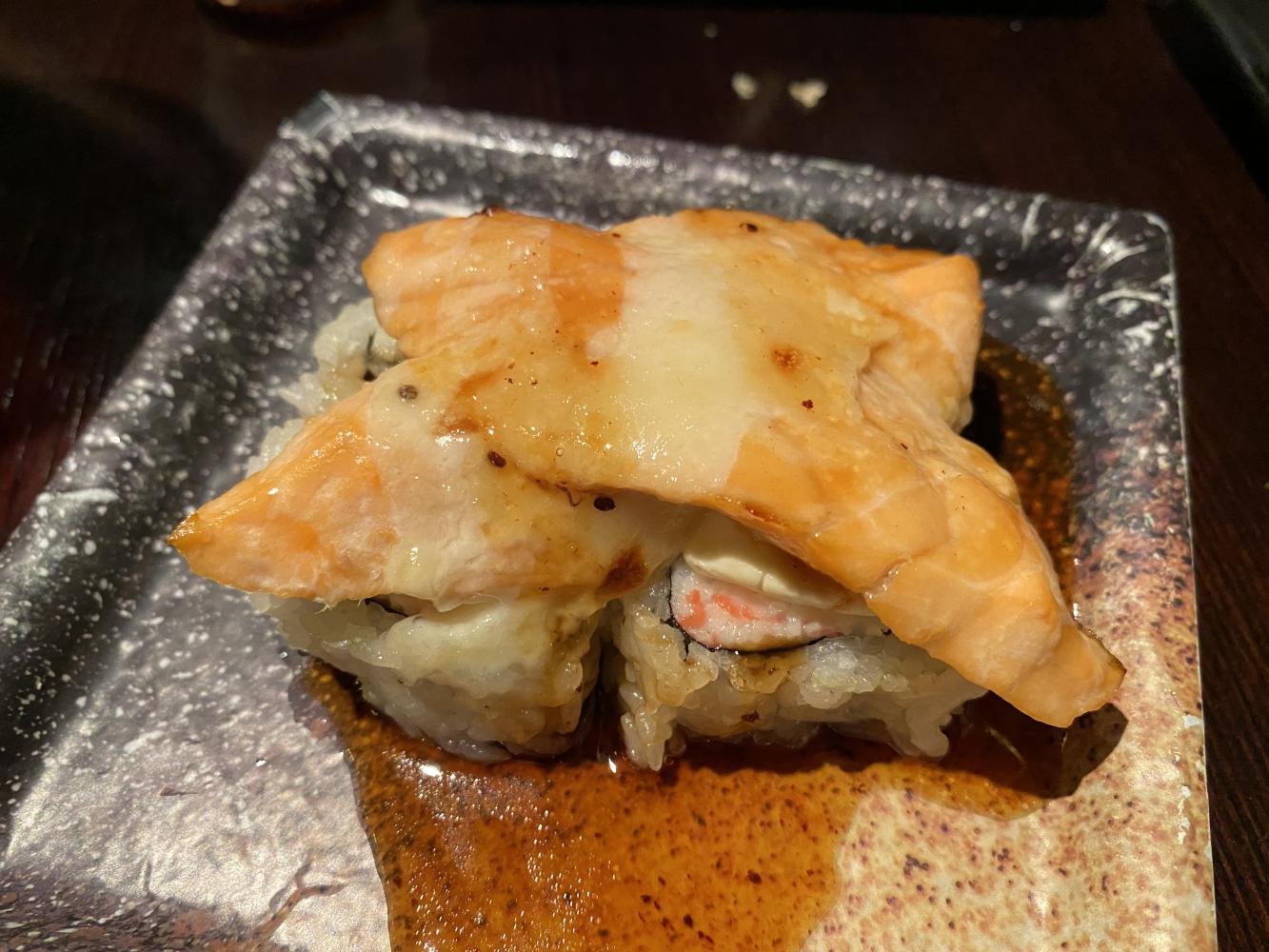 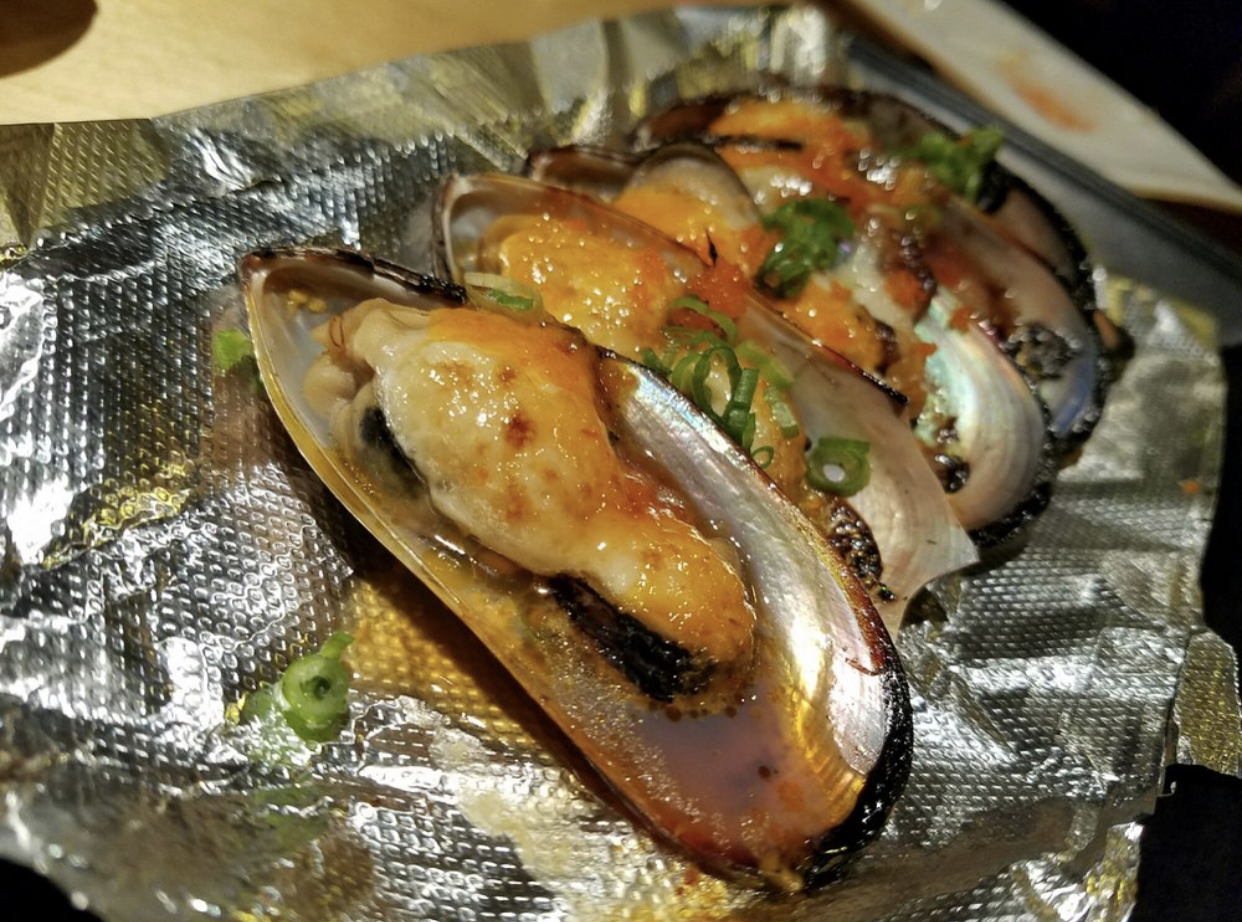 The first roll I tried was called Playboy ($7.95). This baked dish consisted of salmon with eel sauce placed on top of the sushi, while crab, avocado and cream cheese were placed inside the roll. The two pieces of salmon were large and covered the entire four rolls underneath, and although visually appealing, the salmon tasted dry and a little over-baked. However, the sushi underneath really made up for the underwhelming salmon as it felt fresh and straight from the oven. The crab stood out the most with its soft texture and delicate touch. There could’ve been less cream cheese to create a more balance between the fillings, but altogether it still tasted cohesive.

The second roll was Sun of the Beach ($10.95). Inside the roll was shrimp tempura with eel, while on top, it had both shrimp, avocado, as well as green onion and spicy mayo. From my first bite, it wasn’t all that exciting. While the shrimp tempura had a surprising crunch to it and the spicy mayo added a touch of spicy and tanginess to the sushi, I didn’t really taste the eel at all and without the spicy mayo, it would’ve just been bland. Out of all the other dishes, I’d say this was definitely my least favorite.

To end my meal, I was able to receive a free dessert (normally $3.50) that came with my A.Y.C.E. I picked out the Tempura Ice Cream. Similarly to Mexican fried ice cream, it came with chocolate drizzle and whipped cream, compared to the traditional cinnamon sprinkled on top. Taking a bite into the warm and cold delight that surprised my taste buds, it was the perfect end to my dinner. The tempura had a perfect crunchiness, and the vanilla ice cream paired with the chocolate sauce drizzle was tasty and I would honestly go back just for the dessert.

From this restaurants’ fresh sushi to the wide array of choices to choose from, Sushi Neko has fulfilled my expectations from previously hearing great things about this place. They are moderately priced compared to other sushi restaurants and with both their customer service and welcoming atmosphere, I will soon return to try the rest of their menu.