Test your friendship in ‘BattleBlock Theater’ Jump, swim, and climb through the various theaters 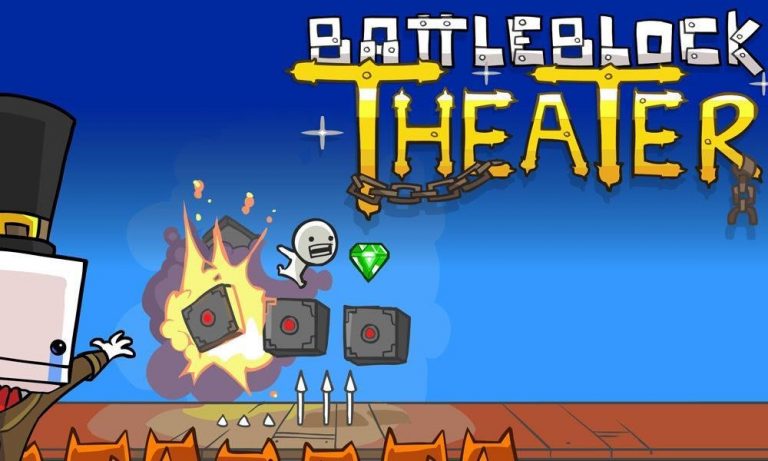 ”BattleBlock Theater’ an older game from ‘The Behemoth’. The game is a very enjoyable co-op experience, at a relatively cheap price tag.
Rating:A+ Photo Courtesy of The Behemoth

Exploding blocks, giant cats, and wacky voices, all these very attention-grabbing elements and more made me instantly recognize this classic co-op game, “BattleBlock Theater”. A game I had fond memories of  watching many Youtubers play

“BattleBlock Theater” is not a new game, in fact, it came out first in 2013. It had quite a popular release and was made by “The Behemoth” which is the same studio that made “Castle Crashers,” another very popular game. However, at the time, I and many others who were my age most likely were too young to play it. Now, coming back to play it with my friends, it is quite an enjoyable experience.

The gameplay itself is a series of platforming puzzles styled within various “theaters” and specifically, in the co-op section of gameplay, the players must work together to reach the end of each level. Players also get rewarded with one of the game’s three currencies, based on how much of it is picked up in each level that then unlocks new cosmetics, such as hats, clothes, or even new utility items to help progress in more difficult levels.

This game is at its best when playing the two-player campaign, as it adds a new set of mechanics. When only playing single-player, it’s a simple platformer, however, with another person, it adds a whole new range of mechanics, mostly involving using a partner to reach higher points and platforms, such as being able to grab a teammate’s hand to pull you up a ledge.

The game does have noticeable problems with controls on PC, however, I often found myself just plugging in my Xbox controller as the keyboard controls became quickly frustrating. Though, this can be easily solved by rebounding the keys to a scheme that is more suitable to the individual player.

Something that I began to notice as I played more was that the co-op can become frustrating with a friend. This is mostly positive because attempting to coordinate what the player wants with their friend can be challenging. Oftentimes, especially in later levels, the game will encourage players to actively con the other player in order to get more of the various currencies and prizes throughout the levels.

The only major negative issue I have with the game is just how much a true BattleBlock experience relies on having a friend to play with. This can be a problem for some people, especially if the people they want to play with are on a different platform, or if they don’t feel like spending money on the game itself.

When first buying the game with my friend, I was not expecting the greatest experience, but an enjoyable one at least. I was pleasantly surprised at the quality of a game, even one that’s this old. The game is a relic, but a definite must-have co-op experience.