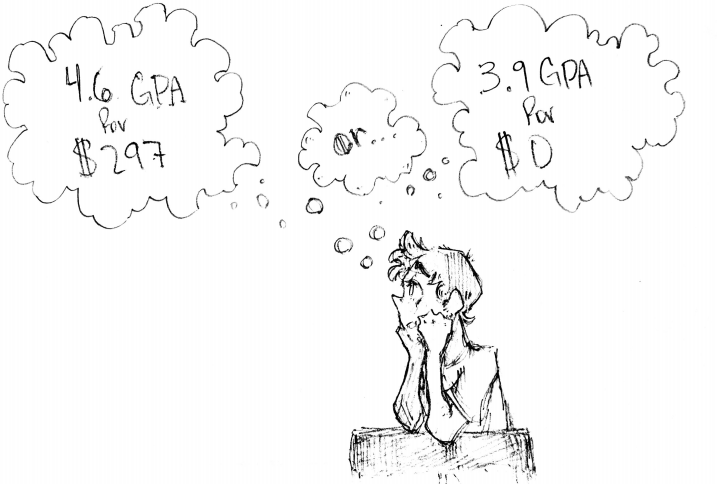 Drafting his ideal class schedule for next year, senior Hassan Bhatti hesitates. Four AP classes or three? He thinks back to the rumors circulating around school from teachers and students: “All AP tests are mandatory for the upcoming school year. But as long as you take it, you’ll get the AP GPA bump for your classes.”

During the 2015-2016 school year, CCSD decided all students had to take each $93 exam for any AP classes taken in order to gain the AP GPA incentive. If the test is not taken, students will gain an Honors GPA increase of 0.025 points.

This new mandate also states that students are only obligated to take exams for three AP classes– so if a student is taking four or more AP classes, they are only required to take three exams and do not need parent permission to opt out of the fourth test (they will not receive the AP GPA increase in classes where the test was not taken, but are still able to receive college credit depending the college’s criteria). The entire CCSD Board Meeting, held on Mar. 11, in which the district discusses mandating AP tests and how GPAs will be affected, can be viewed here.

Prior to this decision, all students, regardless of whether or not they decided to take the test, were able to gain the 0.050 GPA increase. This decision has a debilitating effect on students and their AP class enrollment. They may now feel discouraged from taking AP classes for fear of having to pay for exams they may not pass.

Additionally, students themselves may not opt out of taking the tests; only parents may give their child written permission to do so. This means that students are left to plead with their parents to either potentially break the bank now or to let them skip a test that could earn the student college credit and save the family money down the road.

While the methods for how the test costs will be covered has not been officially announced, it is assumed that all students (besides low-income students) must pay the full price for each AP test they take. For students eligible for free or reduced lunch, the cost of each AP test is reduced to $15. All other students, however, are left on their own to foot the bill for up to three tests they may not feel prepared for–or miss out on a GPA bump they would have rightfully earned otherwise.

The funds for the reduced costs come from nationwide grants awarded by the U.S. Department of Education, and the amount allocated to each state is proportionate to the number of low-income students in the state– the department granted Nevada $415,783 to offset costs. Due to CCSD’s decision to mandate the tests, thousands of Nevada students will have to pay up to $279 for three AP exams if they wish to receive the GPA increase they were expecting, although the increase is capped at four AP classes.

For students like Bhatti, who is taking four AP classes, this is concerning news.

“I enjoy taking AP classes because they are challenging and, as such, I decided to take as many as I could while still having a relatively low-stress year,” Bhatti said. “If a student isn’t prepared to take the test, they shouldn’t be forced to. Essentially, making AP tests mandatory is simply scaring students and preventing them from challenging themselves.”

In other areas of Nevada, such as Washoe County School District, AP tests have been mandatory for years. This establishes a precedent where all students are aware and prepared to pay for the exams they are required to take. Students in CCSD do not have this luxury, however, as the district failed to broadcast its final decision to make AP testing mandatory. There were no press releases or news articles from the district regarding the major change and some students are still unaware of the change.

Now, students will have to foot the bill for up to three tests they may not even feel prepared for–or miss out on a GPA bump they would have rightfully earned otherwise.

Teachers are not unaffected by this change, either. For AP teachers gauging how well they teach the content based off of the average test scores, these scores may be skewed by students who put no effort into the exam. So for students who joined AP classes just for the 0.050 GPA bump, their scores will likely suffer and poorly reflect on the teacher.

Most AP teachers hold “mock exams,” which establish a student’s progress in the class prior to the actual AP test. This allows teachers to realistically inform students of their likelihood of passing. With the mandation of AP exams, this conversation is no longer significant–a student could earn a score of one, the lowest possible, and still gain the GPA bump.

In order to amend the unmet expectations CCSD put forth, the district should work with schools in the valley to attempt to alleviate costs for all students, as well as reconsider the mandation of AP tests for next year.

“It’s like they’re saying, ‘Oh that student is challenging him/herself, we shouldn’t give them credit for doing so,’” Bhatti said. “People really don’t understand the effort AP students put in, and then they get treated like this.”