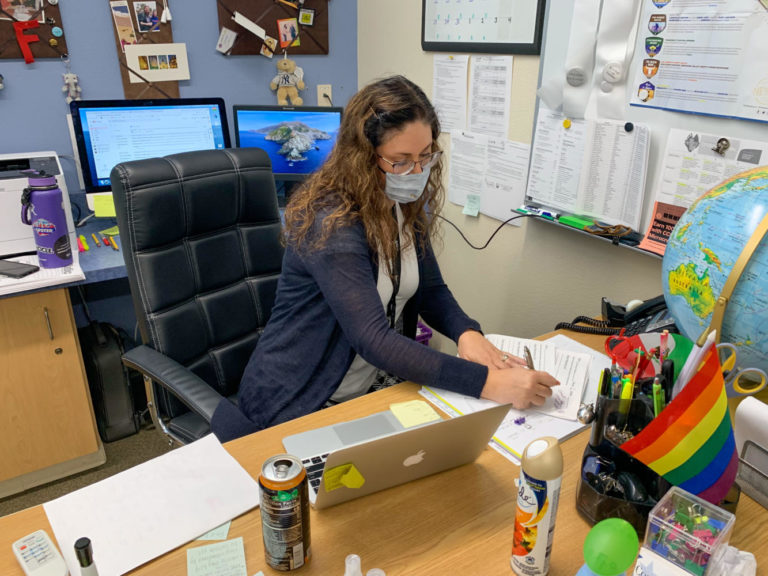 Although CCSD has resorted to a new form of grading, social studies teacher Jessica Kelly has found ways to ease students into the world of summative assignments by assigning a Native American drawing assignment. “It’ll all depend on how the teachers assign summative assessments,” Kelly said. “If they can differentiate the assignments and allow more opportunities for it, then that allows an opportunity for more students to be successful. You can do speeches, debates, discussions, drawings, multiple-choice tests, essays, so many options, all of which can be summative.” Photo Credit: Hannah Paine

There has been a national discussion about how the grading system is broken and CCSD is finally moving forward with its plan for reform. Previously, each school could implement its own grading policy, but it is now an across-the-board expectation that behavioral grades no longer count and summative assignments will become the majority.

“The new grading reform policy was developed by CCSD and voted on by the CCSD School Board of Trustees,” Assistant Principal Donna Besser said. “We are hoping that the new grading system will allow for a more equitable, fair result that is focused on mastery of the material and not learner behaviors.”

Schools have the option to implement these major changes gradually over a three-year period, starting off with a minimum 70/30 scale. After that, schools would transfer to 80/20 for the second year, ending the next year at 90/10.

“When discussing the grading policy with our feeder and neighboring schools, many of us decided to go in the same direction as we share students of the same families,” Besser said. “In an effort to remain consistent in our grading policies for students entering into post-secondary institutions the 3-year transition was not the best way to implement this system.”

With summative assignments now worth 90% of a student’s final grade, tests and projects now play a significantly larger role in students’ GPAs. This has led to a mixed reaction among students.

“Lack of participation in smaller activities will cause students to become less active with homework, classwork, and is creating the mindset of sleep-study-test-repeat. Not only is it destroying the high school culture, but it’s also not as reflective of one’s true grade,” junior Reece Galgana said. “One bad slip-up on a test will destroy your grade for the quarter, with almost no help from the countless formative assignments we complete in class. The current system does not show an accurate representation of the students’ retained knowledge and causes unnecessary and unwanted stress for students.”

Students may think that the homework will not help their overall grades, some teachers have found ways to motivate their students to complete formative assignments.

Although teachers are more optimistic about the new scale, most students are still unsure. This school year is still projected to be difficult, returning from an entirely online year that critics said put enormous pressure on students.

“We’re angry because this grading system was changed right before starting our junior year, which is arguably the most stressful year of high school,” junior Heron Yonas said. “Now with state testing and this 90/10 grading, the pressure put on testing will cause many student grades to decrease.”

Not only is the grading scale vastly different, but students will also be allowed to turn in late work at no penalty and retake summative assignments multiple times.

“I would be happy about the retakes and I am appreciative that it is there, but if I get a B and I want to retake it and then get a C, the grade I don’t like [the B] still goes into the grade book at 90%,” Yonas said. “Even then, it still isn’t enough of an advantage that I get to take it twice.”