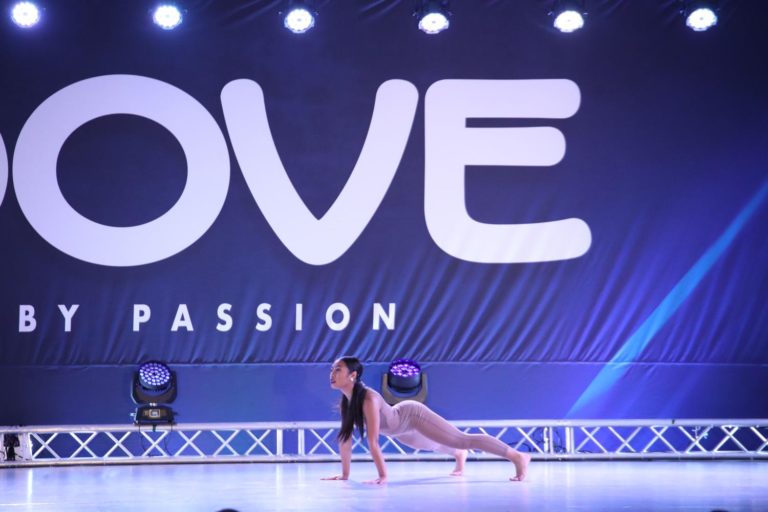 During her Groove season competition in 2020, senior Genelynn De Dios had mixed feelings about getting on stage but knew once she did, she would do an amazing routine. “I loved letting go on stage, but as excited as I was I had more anxiety,” De Dios said. “The only time I had no anxiety was the three minutes I performed on stage and although it was extremely hot and I was dripping sweat it was an amazing and unforgettable experience.” Photo Credit: Genelynn De Dios

Stepping foot onto the dance floor, senior Genelynn De Dios prepares to warm up and start her routine. Extending her legs into the contemporary style, she remembers to stay composed and feel the emotion of the song even though she knows her anxiety might kick in because of the large crowd.

Dancing since she was 11 years old, De Dios has been able to connect with her inner feelings through dance and let go of all emotions.

“When I was younger, my family would always point out that I would walk on my tippy toes and that pushed me to want to start dancing,” De Dios said. “I originally wanted to sign up for my middle school dance team but I had missed tryouts so my mother and I found a studio near my house and enrolled there. When my sister came to my competitions, I loved seeing her dance in the center aisle. She had told me ‘I want to dance like you, Gen Gen,’ and that warmed my heart.”

De Dios has competed in multiple styles ranging from ballet to hip hop at many dance competitions.

“In my second-year solo, we had regionals at Groove and I felt excited to perform knowing I learned so much from my first-year solo,” De Dios said. “I loved the costume my dance instructor gave me and in both competitions, I received dance convention scholarships which made me super proud of myself.”

Balancing school, extracurricular activities and dance can be a bit hard to juggle for De Dios, especially due to long hours of practice.

“I’m not going to lie, it was a bit overwhelming balancing out school and dance,” De Dios said. “I had dance most days of the week, with longer hours on Saturday. Sometimes I’d have a sixth day on Fridays. I went to school in the mornings and after, I’d have only about three hours tops to do some homework. Then I’d have to get to dance practice for two to three hours. After getting home I was very tired and dreaded the thought of having to finish my homework. I would want to get home and just go straight to my bed. But it took a lot to stay up and finish the rest of my homework.”

Dedicated and loyal to her team, De Dios has stayed at one studio, The Base Dance Center, throughout her dancing career.

“This studio was particularly picked because it was near my house and it was a good atmosphere,” De Dios said. “When I had first walked in, everyone was welcoming and kind. I liked this studio because it had a calm setting, for example after or before class I could hang out in the lobby because there would be seats. My mentors were also amazing and cared about every one of us making sure that we grew as a dancer. They were well trained and very trustable due to their background stating they had a previous year of working in the dance industry.”

Due to rigorous training, it can be hard for De Dios to relax especially with the commonality of injuries.

“At times I would have major body aches, from my ankles, knees, back, shoulders and lower tailbone,” De Dios said. “Although these pains were killing me from the inside out, I didn’t really tell anyone. I was scared of letting my team down or seeing the doctors and them telling me that I needed to take a break from dance. Thus I danced through the pain. To this day, these pains still occur, and yet I still fight through the pain.”

Like most performers, De Dios has to overcome fears, like getting on stage, but also battles anxiety throughout her competitions.

“To me, there were two scary things about dance and one was the moment before performing on stage, waiting for our routine number to be called, was very nerve-racking,” De Dios said. “Everyone would be nervous but I’d feel the worst especially since I have anxiety. I would start to doubt myself in my technique, my facial expressions, or if I even remembered the routine. I was a sweaty mess. The second was the award ceremony. My dance teacher had told us that it doesn’t matter what we place, what matters was our actual performance. But for some of us, including me, the award we receive kind of tells us how we did in the judge’s eyes. I had to deal with these challenges and it made me stronger for future competitions.”

Having a committed and dedicated team has kept De Dios motivated and helped her accomplish many things.

“The competition ‘Jump,’ in Arizona, was by far the toughest I’ve competed in,” De Dios said. “I didn’t place for my solo which really bummed me out because I had complications on stage. It was heartbreaking for me because I thought I let my family and instructor down. However, I took many classes from their convention. So later on, during the award ceremony, they were giving scholarships. When they announced my name, I could not believe what I heard. I wasn’t sure at first if they called my name but they did. I felt proud because they noticed me in my convention classes out of so many dancers who are more skilled and have been practicing longer than I have.”

When it comes to the future, dance will always have a place in her heart no matter the stress and pressure.

“I feel dancing will always be part of my future,” De Dios said. “Even if it’s not with a team or competitive dancing, my dream is to have my own studio where I can just dance my heart out without anyone watching. So that I can just have days where I can go to this studio any day of the week, turn on the music, and dance like no one is watching. Maybe having my own studio to possibly teach littles ones could be a potential goal for me.”