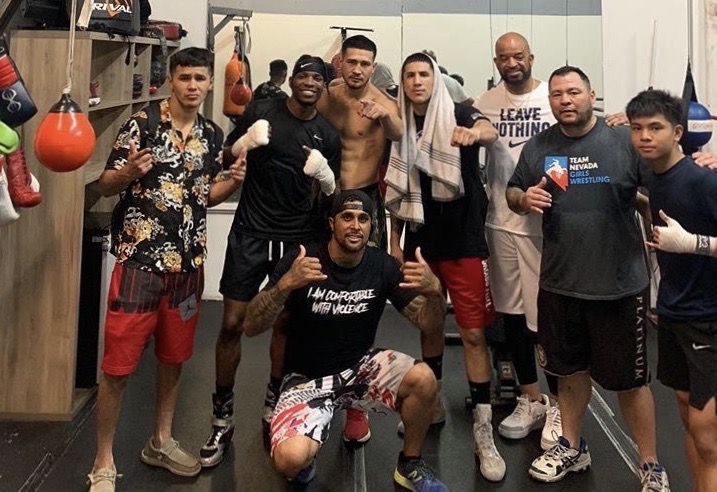 After a rigorous day of training, sophomore Gavin Ariota poses for a picture with boxers he looks up too and learns from. His workout routine includes two hours of muscle training, one hour of sparring and finishing that off with a run/jog. "At the end of a hard day of training we all love to relax and just hang out as friends instead of boxers” Ariota said. Photo Credit: Seon Lee.

As he enters the ring, sophomore Gavin Ariota can feel his heart beating out of his chest. He is locked in and determined to leave it all on the floor and come out victorious. Throughout the match, he tries to stay composed and remembers he’s fighting for a chance to rise through the ranks.

“When I’m in the ring all I’m thinking about is how I can outwork my opponent and be tougher and better than they are,” Ariota said. “That’s the mindset that I bring to the gym; I feel like if I just work as hard as I can nothing will be able to stop me and my grind.”

For the past three years, Ariota has been sparring at “Pound 4 Pound” to prepare for a higher weight class. He has been practicing there for nearly three years and working towards increasing his stamina and speed.

“My inspiration to start boxing would honestly have to be myself and wanting change in my life,” Ariota said. “I felt as if I was almost wasting my time with video games so I decided to make something of myself instead. After sparring for a while, I decided that I enjoyed it so much that I wanted to pursue boxing and take it seriously.”

“Gavin is a very special person and also a very talented athlete,” Kaipo said.“I have seen the way that he’s changed over the years and it’s overall been a remarkable transformation.”

Once Ariota got involved with boxing he stopped doing his other hobbies as much such as video games and track.

“For me, right now, boxing is everything and I enjoy it so much that nothing can distract me no matter how tired or lazy I get,” Ariota said.” “Motivation for me comes easy. I just think about the past and how far I’ve come and realize I’ve come such a long way I can’t give up now.”

For Ariota to box he must follow a certain diet. His diet includes protein such as chicken and beef, vegetables such as broccoli and green beans and a protein bar in the morning.

“Sometimes it gets a little hard because I have to stick to a certain diet and every time I want to eat something unhealthy it’s like dang, I can’t ruin my body for this.” Ariota said. “Like when we go out to eat I always try to get a salad or something light because I need to watch my weight and body.”

By devoting his time every day Ariota believes that one day he will compete in a title fight.

“My dream will always be to compete for a title and be a contender and I will do whatever I can to get to that dream,” Ariota said. “Everything that I do now will result in a better future for not only me but my parents and future family. Once I make it I will truly believe I lived a successful life.”