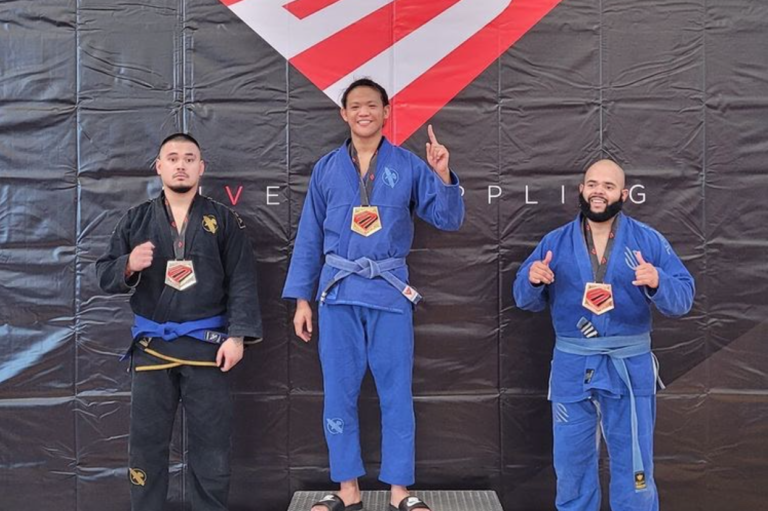 Standing on the top of the pedestal in first place, senior Michael Ennis shows off his satisfaction by holding up one finger. Ennis, although comparably smaller than his opponents, trained rigorously in order to achieve his goal of being first. “Just go for it,” Ennis said. “Most of the time hesitation will make me want to stop, but I don’t. My mindset is really to keep moving forward. Nothing is stopping me from getting what I want.” Photo Credit: Michael Ennis

Walking towards the mat, senior Michael Ennis feels each and every individual bruise left from his training sessions and reminds himself of the dedication put in just to be able to compete. He takes a deep breath, inhales his pride, while exhaling out the anxiety weighing down his shoulders and begins combat.

Curious about the different styles of martial arts, Ennis began his journey in jiu jitsu at a young age.

“I got into jiu jitsu because it always seemed different and more compelling compared to other martial art styles that I was able to try,¨ Ennis said. ¨My parents were keen on me learning because they wanted me to learn to defend myself. So it started with muay thai and kickboxing, but later on I enjoyed jiu jitsu more than the other two so I stuck with it.”

Currently, on the Vinny Magalhaes Jiu-Jitsu team, Ennis spends time with his peers and exudes effort into his everyday practice to become the best when competing.

“My size and strength was my biggest problem. I was always weaker than almost everybody on my team and even in competitions,” Ennis said. “But, it is a very technical sport and I love learning new things. Making this sport my own and calling it ‘my game’ is one of the best feelings. It’s important to me and I take pride with what I do.”

For inspiration, Ennis puts people such as Mica Galvao, a professional grappler, on a pedestal to remind him to train harder and improve his techniques.

“He’s one of the youngest black belts and is doing things unimaginable for the majority of practitioners,” Ennis said. “He inspires me to be better than he is and work as hard as I can to compete at the highest level I can.”

Having support from his peers and coach, Ennis has been able to improve over the years, winning accolades from competitors and friends alike.

“Michael has been putting tactics and techniques together more and more,” Coach Jamie said. “During competitions he’s been creating his own game and reinforcing what we’ve worked so hard on.”

Although juggling school and everyday practice can be strenuous, Ennis works through this stress by utilizing built up tension to train more rigorously.

“It’s very hard to do a sport like this when you’re getting beat up everyday,” Ennis said. “The physical demand on your body is intense and hard to overcome when starting out. It takes some time before you’re used to the pain and damage you may take during practice or competitions, but it’s somewhere I can relieve my stress from the world. It’s like all the chaos from the world just disappears when I go to practice. I just focus on what’s going on at the moment and nothing else.”

Throughout his journey, Ennis has had some memorable moments that make all the soreness and bruises worth it.

“I did a five grappling tournament, where I hit one of the moves I had been practicing for months,” Ennis said. “The move was called ‘K guard’ with a matrix back take. I inverted under and took the guys back and ended up in mount, which was one of the best feelings.”

Recently, Ennis is hoping to compete at another tournament and encourages those interested to give it a try.

“Right now I’m just preparing to go to another competition so I’ve been working out more with my peers and going to the gym consistently,” Ennis said. “I have a pretty older team, most of them have jobs and families, but they always put their time and effort into teaching me new things to get better. I will continue training and jiu jitsu is something people should definitely try.”