Life on rainbow road Closets are only temporary safe havens 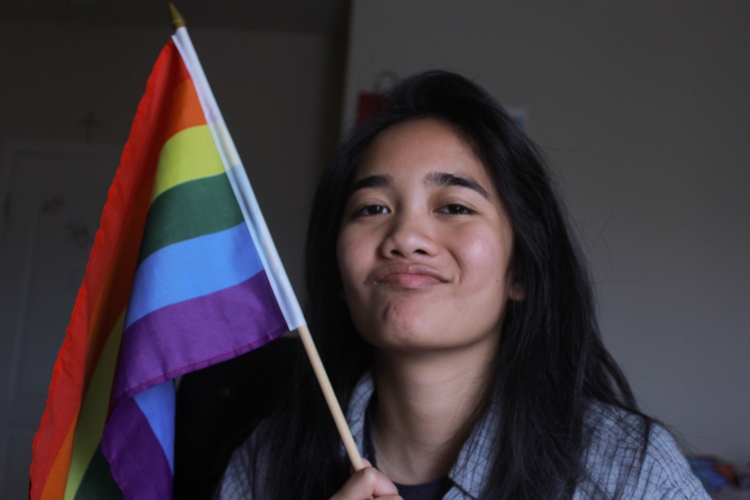 Sprawled across my parents’ bed, I stared at the ceiling with vacant eyes and rampant thoughts that made my heart beat out of my chest. Scenarios played out in my head–each one feeding my paranoia.

My mom sat next to me, propped up against a few pillows and paying me worried glances every now and then. After an hour of pretending nothing was wrong, the words I’d been rehearsing in my head finally slipped out of my mouth in a shaky mess: “Hey, Mom. Can I tell you something?”

Tuesday, Oct. 11 marked the 28th anniversary of National Coming Out Day–a day of awareness for the LGBTQ community to acknowledge the struggles associated with one’s sexuality and gender identity. Who knew telling someone two words like “I’m gay” or “I’m transgender” could have such an impact on one’s life?

From culture to religion, misconceptions about who can love who are instilled into our minds. Most parents speak of romantic relationships as between a man and a woman, often using religion to enforce cisgender (identifying with one’s biological gender) heterosexuality. People raised in conservative households are conditioned to believe differing sexualities are immoral and something to be punished for.

Existence isn’t shaped by a universal mold but rather a spectrum of identities that is inclusive without judgement.

For many teens across the nation, coming out to their parents could mean sacrificing life as they know it. Disowned by their family, they are forced into homelessness and surviving on what they can scavenge. Misconceptions aren’t the biggest threat to one’s sexuality and gender identity–tradition is.

Taught homophobia and transphobia at a young age, it can be easy to notice how close-minded others tend to act. Subject to stereotypes and verbal harassment from peers, LGBTQ youth can’t find safety in places they need it most–55% feel unsafe in school because of their sexuality and 37% because of their gender identity. They are told their love is something unnatural, when in reality, traces of homosexuality are found in the lives of several highly developed species and traces of gender expression throughout history.

The stigma around queer identities is the only reason why people fear coming out at all. However, there is a sense of entitlement in doing so; it becomes a battle between one’s pride and the expectations society advertises. The “true love” that media portrays is almost always cisgender and heteronormative. The few existing televised LGBTQ love stories display characters with tragic backgrounds or fatal endings as if to say valid relationships mimic a dramatic trope that ends in death like Lexa from The 100.

Lack of positive representation for LGBTQ individuals scares them to the back corner of their closet. Regardless of outcome, identity should be supported not forced. Existence isn’t shaped by a universal mold but rather a spectrum of identities that is inclusive without judgement.

“Have you always liked girls?”

I nodded with my head resting against her shoulder. My mom’s arms wrapped around me in a tight embrace, unwilling to let go. Silence occupied the empty air as her mind took the time to process everything I had told her. Soft tears falling from my own eyes, I repeated the words she said in my head over and over: “I’ll love and support you no matter what. As long as you’re happy, so am I.”

Released from a burden, I was freed from the confines of my closet. No longer obligated to censor a part of myself in front of those who I love most, my self-expression flows naturally without fear or guilt for lying. All queer individuals are deserving of the same accepting experience as I was lucky enough to have. Happy endings to coming out stories should be expected–love is love after all.