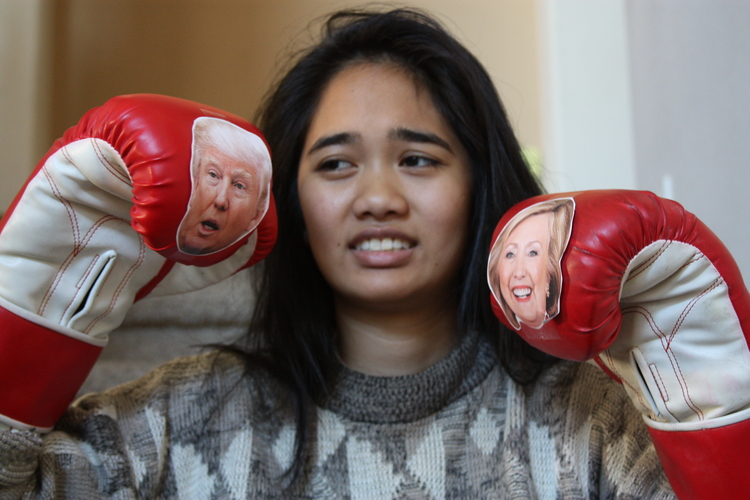 Last week, Hillary Clinton and Donald Trump went head to head in an ill-prepared battle for superiority. Little more than childish bickering, the two used tactics that ignored our country’s greatest concerns. Weaving the conversation towards their own personal interests, the evening came down to a cocky businessman versus a hypocritical politician. Welcome, all, to the beginning of this great nation’s series of presidential debates.

This event was more like a 90-minute roasting session.  Both candidates, skillful in using what I like to call “political flashbangs,” stunned their audience with irrelevant information as distractions. With the initial aim of advertising their plans concerning domestic policy, foreign affairs and other topics that were brought up in the moderator’s questions, Clinton and Trump then turned it into a matter of personal affairs. Instead of discussing the issues at hand, the debate was a loop of Clinton telling stories that nobody asked for and Trump translating each of her words into fiction.

When they weren’t trying to one up the other, their responses were murky–a wave of generalizations that provided little reassurance. While they were fluent in identifying issues, that’s as deep as they went. Clinton went on and on about the significance of racial issues in this country, but she missed the point. Yes, it is understood that minority communities must be mended and respected by the law, but how will that happen? How will police training be changed to reduce police brutality?

People don’t want to hear sob stories. They didn’t ask to know about Clinton’s granddaughter or how her father supported her family. They didn’t ask to know about Trump’s disputes with Sean Hannity or how successful he thinks his company is. People want to hear legitimate plans on how to tackle systematic oppression. People want to hear plans on how the government will reduce the country’s trillions of dollars in debt–America needs concrete answers.

The two transformed politics into entertainment, spitting arguments back and forth with no regard to their opponent or the moderators. Showing little respect for each other, the audience did the same for them in return. Across Twitter, people used #debatenight to call out Clinton and Trump on unnecessary statements–often ironically and with disappointment.

How can these candidates set an example for politics when a majority of their words couldn’t be held as a fact? Trump’s best friend on the podium was weak and false rhetoric. It was as though the man came up with all of his facts off the top of his head. At one point when trying to support the “stop and frisk” policy, he claims taking it away caused murder rates to increase in New York although the opposite happened.

Clinton wasn’t exempt from questionable moments either. From describing Trump’s economic plan as “Trumped-up trickle down” to expressing a quick “Whoo!” followed by a shoulder shimmy once the attention was on her, she was overly confident that her points would overpower his.

America needs professionalism–not candidates who battle on Twitter. The lack of seriousness in the debate presented politics in a poor light. Seen as a joke to many, the persona of both candidates portrays the presidential race as something worth making memes out of instead of thinking about thoroughly. It’s unfortunate how one can expect a good laugh out of crucial moments that decide the future of this nation.

Politics in America require candidates who not only address issues but articulately explain the policies they wish to implement. The primary goal of any political campaign is to provide insight as to who will best fit a certain position. An ideal debate consists of politicians who do not base their arguments off insults but off credible information. The presidential race must provoke a nation to better the state of its government instead of provoking laughs on the opposite side of a television screen.