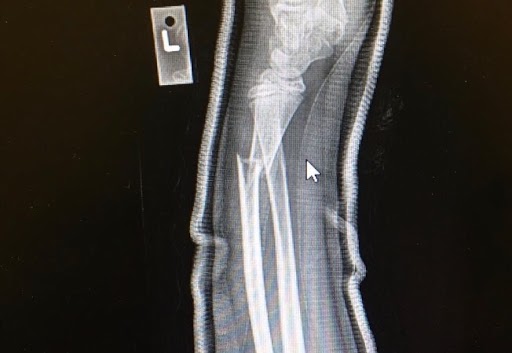 Sitting on the examination table inside the doctor’s office, Bianca Kingham gets an x-ray done on both her legs. The diaphysis of the shin bone on her left leg broke off from the epiphysis of the bone, leaving the remainder of the part connected to the Femur jagged. “I constantly had to switch a [medical] boot between both legs,” Kingham said.

Sweat trickles down sophomore Bianca Kingham’s face as she dribbles the ball down the court. She’s halfway to the three-point line when she feels a sudden pain in her legs. It’s so strong that Kingham winces. She feels as if the muscles in her legs are cramping, but she pushes through it. Kingham regains her momentum, and makes a basket.

“I didn’t know what that pain was. I thought it was just muscle soreness,” Kingham said. “Then, it progressively got worse. One time when we were doing our mile warmup during practice, I fell down from the pain. Later that day my mom took me to the doctor, and I had some x rays done. They told me I have severe shin splints, and if I continued, both legs could become fully fractured.”

Unable to play sports while healing, Kingham had to find a replacement activity. As an extracurricular activity for freshman year, Kingham found the volunteer program at St. Rose Dominican Hospital, Sienna Campus.

“My friend was talking about how she wanted to volunteer at Sunrise Hospital, so I thought it would be really cool if I volunteered at a hospital to get more first hand experience because I want to be a doctor,” Kingham said. “I really enjoy it because everyone there is nice and really helpful, and it’s a safe environment.”

From answering calls to transporting patients, there are plenty of stories for Kingham to tell.

“One time, this woman was about to go into labor, and I was in shock. I put her in a wheelchair and I pushed her all the way up to the third floor,” Kingham said. “The labor center was closed and I was yelling for a nurse because her water broke. It was out of this world. I was trying to run quickly because I could tell [the bumps were] hurting her. So, I was trying my best.”

Kingham has also seen a fair amount of chaos during her time in the volunteer program.

“I was going through the [emergency room] hallway and I looked to the right, which is the back of the ER where [the most injured] patients need to go, and I saw this guy that looked like he got into a motorcycle accident,” Kingham said. “The police were holding his leather jacket, which was all ripped up, and the patient’s arm was just dangling there, on his side. I could see the nerves and everything. He looked unconscious. It was shocking.”

Being in the nursing program and balancing her workload with long volunteer hours has been difficult for Kingham.

“It was pretty hard because I arrived home from the hospital at 7 p.m. at night, and I would still have homework. I’d get to it late because I would have to shower and everything,” Kingham said. “I did get a lot of assignments on Monday’s, which is when I volunteered, but did the most important ones, since they were due the next day. Then I would just double work the next day or I would do my work super fast.”

Whether it was first-hand or through the experiences of medical workers such as doctors and nurses, Kingham has learned many important lessons.

“You should want to keep good relationships with the people you’re working with because if there was an emergency, and you don’t want to be against someone,” Kingham said. “You’d be making it a challenge to cooperate if someone’s hurt.”

Unfortunately, the COVID-19 pandemic has stopped the volunteer programs offered at all St. Rose Hospitals in the area.

“They’re only allowing people 18 years old or older to volunteer, and they have to sign a waiver.” Kingham said. “Honestly, I still miss volunteering over there right now. I like the adrenaline rush and helping patients.”

And while volunteering has been a great opportunity, Kingham was looking forward to participating in the fall and spring sport seasons at her zoned school.

“I really was planning on joining the basketball team this year at Liberty [High School], but due to the Coronavirus I can’t. I wanted to rejoin either [swimming or volleyball] because they were less impactful on my shins, and my mom was more comfortable with me playing those sports,” Kingham said.

The injury that ended one good thing, became the beginning of something so much more valuable for Kingham. Along with learning new skills and gaining more experience, she has found a new path for her future.

“I wanted to play in high school to get a scholarship, but I think volunteering at a hospital is more important for my career field,” Kingham said. “So I will still play sports as a hobby to improve, but I’ll do it at my own pace.”