Shooting in film never (f)stopped being popular In a world of digital, this media format still thrives 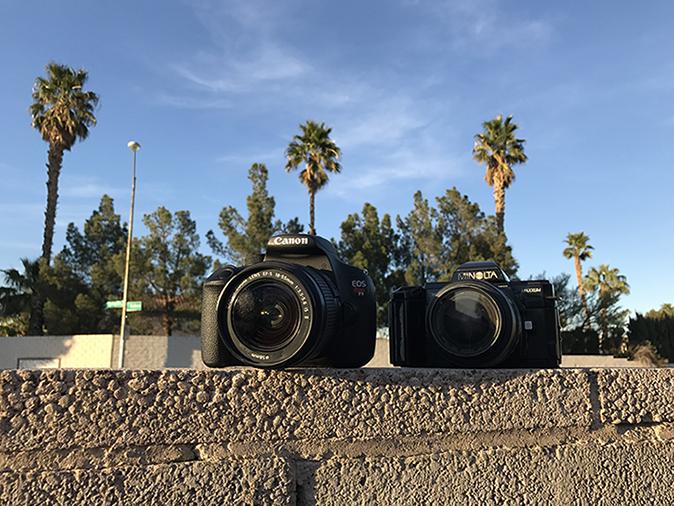 Photography is currently dominated by digital cameras because of the popularity of DSLRs and phones. Some would even say that they overshadow the glory film used to have. Photo credit: Vinh Tran

Being a journalist calls for a multitude of skills—one of the most taxing being photography. But shooting with a film camera shouldn’t be dismissed just because digital photography is the most popular way to take pictures. Although I have gotten the gist of how to take good photos, I still struggle to stray from the shortcuts that digital photography grants.

When one shoots with digital, there are multiple ways to make the process of capturing a picture easier. There is automatic shooting, autofocus, convenient file formats and editing in post that make taking a picture much easier. Most, if not all, of these technological advances, are not available on a film camera.

Even though a film camera doesn’t have the same features as a DSLR, I still wouldn’t part with either one of them. Photos taken with film are more vintage and have a grainy look to them, whereas digital photos are clearer and are higher in quality. Many people try to replicate film with editing to get the vintage look, but they don’t come close to the real deal.

Disregarding either film or digital isn’t be the point I’m making. Of course, I will continue to use digital because of how easy it is, but there are times where I prefer film. Rather than being crowded in my camera roll, having a physical copy of a photo will allow me to look back and remember the moment.

The most annoying part of shooting with film is the process you have to go through just to get your results. I had to go to town to get the film developed, the negatives scanned and transferred to my computer. But the feeling you get when you finally get the perfect shot in your hands is nothing that digital can bring.

Just because digital photography is convenient does not mean that it’s easily accessible. An entry level DSLR will cost hundreds of dollars, whereas an entry-level film camera will cost less than a hundred. Of course, there are costs to purchasing film and developing them, but they’re marginally less than the combined cost of DSLRs.

Although I would prefer shooting in digital, I would never part with film. Even if I’m still learning, film still has a lot to offer for the average person. After all, photography started off with film. Instead of dismissing it as a form of media from the past, why not embrace it as another way of saving a memory.