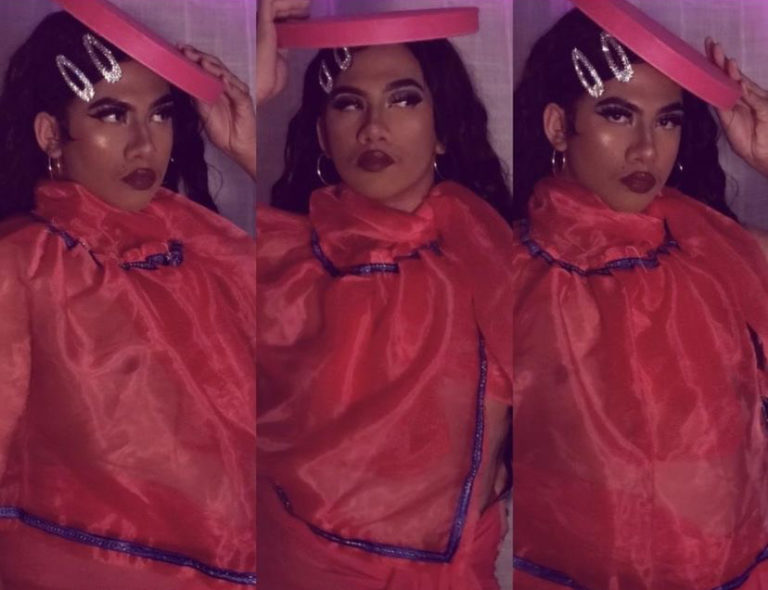 Looking at his finished look, junior Karim Abd-Elmalek poses for his next Instagram post. Through drag, Abd-Elmalek has tested what he is truly capable of, breaking boundaries and becoming more confident. “It's nice to let people out there in the world know what I’m doing,” Abd-Emlalek said. “I am a person doing this type of thing, and there's not a lot of people who are my age that do this." Photo Credit: Ashley Harris

With the swipe of a brush and bounce of a sponge, junior Karim Abd-Elmalek gets ready for yet another drag look. As he submits entries to small competitions, he is confident and empowered with the results.

Drag is an art form catering to everyone, and Abd-Elmalek did not shy away after noticing it for the first time.

“One night I was out with my parents at the Bellagio, and there were two drag queens,” Abd-Elemek said. “I was thinking, ‘Why are these tall really pretty women just sitting there?’ They looked so powerful.”

The two drag queens turned out to be Naomi Smalls and Thorgy Thor, who influenced Abd-Elmalek to attempt his first ‘snatched feminine woman’ look in mid-2019.

“I was going for a ‘let’s slay the house’, and glued in my eyebrows even though I had no clue what I was doing,” Abd-Elmalek said. “I thought I was serving, and I thought that I ate it up. I was excited, it was something new, something different. I was proud of myself for stepping out of my comfort zone, which was definitely a little scary.”

Now after around two years, Abd-Elmalek has grown his creative skill set with dramatic makeup and stylish clothing.

“It makes me feel confident and pretty,” Abd-Elmalek said. “My normal out of drag, boy Karim, is kind of hiding a part of himself that he isn’t able to express. Drag is important to me because it’s another art form where I can express what I do and how I love looking.”

“It’s like ‘this is me one time’, and ‘this is me another time’,” Abd-Elmalek said. “She’s very Bratz doll inspired, ‘give me my small purse and beret’ kind of girl. She’s a fashion statement, and she could be on a Vogue magazine cover.”

Abd-Elmalek has directly faced the negative stigma against drag queens, but he keeps himself surrounded by loving, supportive friends.

“There’s a lot of random people who will slide up on my Instagram and call me slurs, but honestly they’re probably just closeted and want to do what I’m doing,” Abd-Elmalek said. “A lot of my friends encourage me to keep going, they’ve told me to ‘keep doing this’, ‘you’re going to succeed’. Here I am, and I’m doing so much better than I used to.”

Staying motivated to do drag had been an early obstacle for Abd-Elmalek as the payoff wasn’t what he had been expecting. Purchasing quality products was also extremely hard to keep up with.

“There was a lot of discouragement when I thought my looks were really rough,” Abd-Elmalek said. “I wanted to progress really fast, and be able to turn myself into a different person. It was hard for me to do that because of the expenses, and I wasn’t able to buy nice products. I was shopping at the Dollar Tree, and thought there wasn’t really a point in not being able to show people what I was doing.”

Focusing on school and taking time to post drag looks online has put some strain on Abd-Elmalek.

TOP FIVE TRENDS THAT SHOULD NOT COME BACK Which trends are the worst of this selection?

“I always post on my Instagram story, and people will slide up asking, ‘Is that you?’,” Abd-Elmalek said. “It [school] does interfere. I have to take time to submit looks for competitions I’m in, but school must come first, then my drag of course.”

Being in front of an audience and performing live is something that Abd-Elmalek looks forward to doing sometime in the future.

“Some people will do drag as an everyday job, and I kind of want to do it as a side hustle in the future with a gig every now and then,” Abd-Elmalek said. “What’s most interesting is seeing people’s reactions, especially when gay people will bring their straight friends to the club. I want to see people live their life in the crowd and being engaged in the show.”

Abd-Elmalek’s close friends have noticed how he grew as a person from drag, and they’ll be sticking around for his journey over the coming years.

“I saw drag give Karim a better sense of himself,” Cyncir Pollard said. “He embraced his feminine energy and let that be a source of power everyday, not just in drag. I want to support Karim by being honest and real with him, but showing him that I support his growth as a person and artist. I will be in the front row at any of his events.”

Abd-Elmalek hopes to inspire others to achieve their goals the same way that his friends and inspirations did for him.

“I want to continue, and I want to start a YouTube channel doing drag to influence more people to not be scared to try it,” Abd-Elmalek said. “Through drag, and through normal makeup, don’t give up. You are always going to progress.”