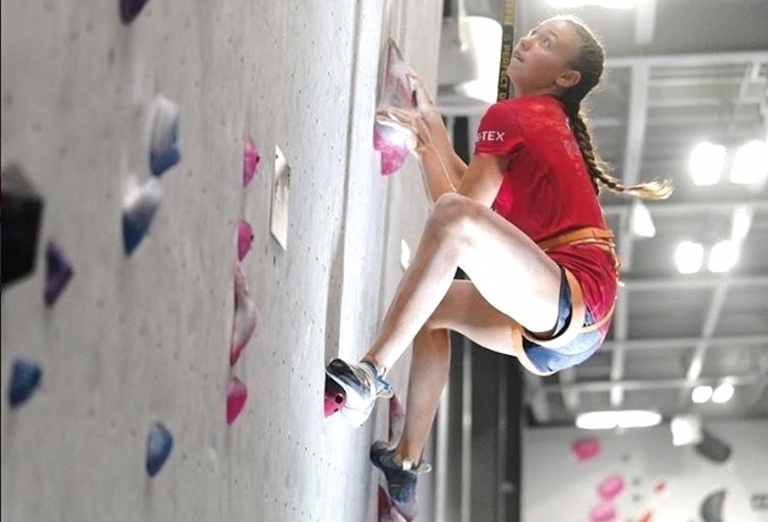 Scaling a wall, freshman Lily Gurdison pulls herself up. Gurdison has been rock climbing since the age of nine. "When I first started rock climbing it meant a lot to me because not only did it teach me to work hard, it taught me that there are no limits to what you can accomplish if you are determined," Gurdison said. Photo Credit: Lily Gurdison

One more push. One more pull. She’s feeling sharp pain, but pushes it off to the side. All that matters right now is making it. Making it to the top of this insanely large wall.

At a young age, freshman Lily Gurdison discovered her love for rock climbing after attending a summer camp at a rock climbing gym. For her, it was fun, but also competitive and rigorous, requiring her to develop a strong mind.

“When I started out, I would go every week to one of the climbing gyms [here in Vegas] and then they asked me to be on their team and train with them,” Gurdison said.

Gurdison accepted the offer of being on their rock climbing team and began training with the Team Mesa Rim.

“I really liked [both types of rock climbing] from the start,” Gurdison said. “They have really shaped me into the hard working and competitive person that I am today.”

Since then, Gurdison has persisted and continued to rock climb, train and compete. She now is ranked as ninth in the entire nation by U.S.A. Climbing for female youth climbing.

“It felt really great [to get the ranking],” Gurdison said. “I had worked super hard that year and it was amazing to see it all pay off.”

Gurdison is not only ranked highly, she also travels all around the country for her sport. She’s been to over 20 states such as California, Colorado and Utah through her training and competitions for rock climbing.

“[Rock climbing] has taught me that there are no limits to what you can accomplish if you are determined,” she said. “It’s cool to do things that you never thought you could do. I’ve won second place at regionals and was on the podium for a lot of comps I’ve done.”

Although Gurdison climbs recreationally, she hopes to eventually go pro. As for right now, however, she is working towards the goal of making the U.S. Olympic climbing team.

“2020 is when rock-climbing will first be in the Olympics,” she said. “I hope to one day be able to make it there. Now that I’m old enough, I have the chance to place top four in the nation and be part of international competitions.”

As she continues on with her climbing career, her family has even begun climbing as well. She is also motivated by her peers in climbing.

“I am so fortunate that my family is so supportive of the sport,” Gurdison said. “It’s really fun to climb with other people that are pretty much like you.”

Gurdison continues to be inspired by all her predecessors as she progresses in her field. She hopes to be as good as them one day as she works towards making it to the Olympics.

“All the super strong lady climbers out there are [inspiring],” she said. “People like Megan Martin, Janja Garnbret and Shauna Coxsey especially show that. It’s awesome to see how far just pushing yourself almost to your limit can get you.”