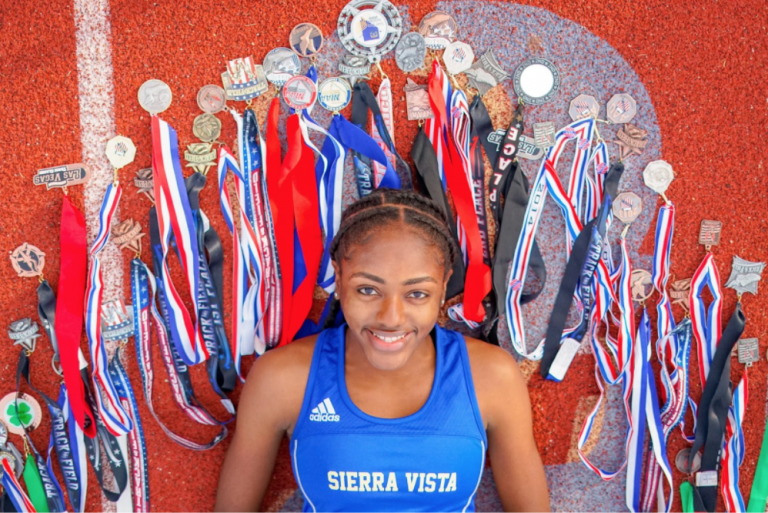 Laying with all of the medals she has earned through her hard work and commitment, senior Kassidy Land poses for her last season with the team. “Because of track, I have met so many people that I have grown friendships and close bonds with,” Land said. I have met some phenomenal athletes that have given me some of the best advice, which has given me more inspiration.”Photo Credit: Kassidy Land

Getting positioned before a long sprint, senior Kassidy Land reminds herself to focus and let everything built up inside take over her body. As Land begins to run, it’s like all the tension built up in her body drifts with the wind blowing in her face, and she begins to pace faster.

“Personally I have always enjoyed running the longer sprints like the 200 and 400 and when I am in a bad mood or stressed it feels great to let the tension go. I like these events because I feel like they test both a person’s speed and endurance, more than any other event and the longer the distance the better.”

Running for more than eight years on varying teams, Land is currently on the Sierra Vista track team.

“I started running track when I was 10 years old,” Land said. “My first club team I ever ran for were The Stallions and I ran for them for three seasons. Then I joined Gen X for two more club seasons. Because of the experience I had in club track, it led me to run in high school as well.”

Initially Land gained her interest in track through playing softball.

“My two older sisters were really gifted in the sport and enjoyed every bit of it,” Land said. “However my other older sister, younger sister and I could care less about softball from the start.  I realized the only thing that I liked about it was running the bases, so I told my mom I wanted to do a sport that involved a lot of running. That’s when the whole discussion of track came along.”

Watching famous track athletes such as Allyson Felix and Sanya Richards Ross, Land trains hard so that she can match up to their energy on the field.

“I have always been a fan of Allyson Felix and Sanya Richards Ross,” Land said. “Seeing all the work and determination they have, becoming some of the best female track athletes continues to amaze me and it makes me want to work that much harder when I train.”

After an extremely stressful day, Land always looks forward to running to lift her mood.

“Running is definitely a stress reliever for me,” Land said. “If something is bothering me or if I am in an agitated mood, going on a long run seriously helps. I also tend to run faster when I am upset or just in a bad mood.”

Due to Land’s commitment and determination, she has been able to improve her running drastically on the track.

“At regional finals, my teammates and I were getting ready for the 4×4 relay and we had a 30 minute intermission before the race,” Land said. “Unfortunately, we had lost track of time and realized all the other relay teams were already on the track about to run.  I was really shaky and I couldn’t catch my breath when I caught up with my teammates because I had left my bag on the other side of the field. But once my teammate, Emma, gave me the reassurance that I will do great, it was well needed, causing me to run my fastest split yet and we ended up winning the relay as well.”

Every sport comes with its difficulties and for Land, practices can be very rigorous and repetitive.

“I think the hardest thing about track for anyone is the constant training,” Land said. “Realizing you can’t really take a break from running because all the training you spent months on top of months working hard for, can all go away in as quickly as 4 days. It takes a lot of effort to get in shape for track so even when you don’t feel like running on some days, you know it isn’t an option. Track athletes can have a couple of rest days, but the training is year-round which can be draining.”

Recently because of COVID-19, Land’s team has had to cancel meets, which is devastating since it is her last season, but she tries to stay positive.

“From canceled meets, to not having set practices, it’s really upsetting for a lot of us,” Land said. “Track is important to me and it has become a significant part of my family’s life. It’s something we all bond over because my mom and dad both ran track when they were younger and now all their daughters are following in their footsteps. We find ourselves making the best memories with each other from track. Whether it’s the practices or meets, it’s always a fun time.”

Keeping her head in the game and training hard for college is as far as Land wants her track career to go.

“I honestly just see myself going as far as collegiate track,” Land said. “I think by the time I am done running in college, I’m going to feel burnt out and just ready to move on from track. That’s not to say I won’t still run, I just wouldn’t want all the pressure that comes with competing anymore and being a professional athlete.”