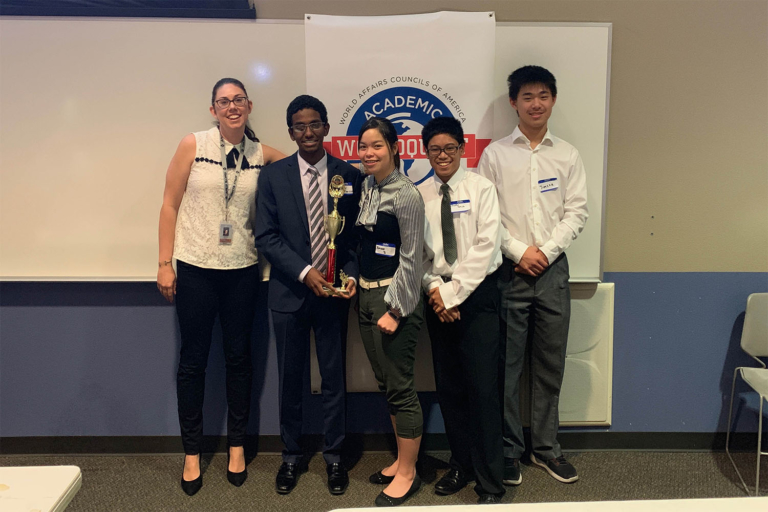 After the announcement that they had won second place, seniors Samer Youssouf, Amber To, Jonathan Denalo and Jimson Huang commemorate their win with Academic World Quest coach Jessica Kelly, on March 30, 2019. “I joined the team because I wanted to become more knowledgeable and thought this would be a great experience to test my knowledge,” Youssouf said. Photo Credit: Samer Youssouf

To prepare for the upcoming contest, members of Academic World Quest have begun to pick and study their topics.

“It’s like a nerdy after school fun fest,” Academic World Quest coach Jessica Kelly said. “We are all just a bunch of nerds who want to talk about the world and want to be informed.”

“It [has] motivated me to watch the news a lot more than I usually do and talk about it with other people in order to understand it more,” senior Samer Youssouf said. “Along with that it allows me to understand many of the issues that I maybe didn’t know about beforehand.”

Students from CCSD come together to compete at a trivia-based contest, where they must answer 100 questions throughout the course of 10 rounds each. The winning team from the district will then compete at nationals in Washington D.C.

“I didn’t even know that one of my friends were actually competing and we actually saw each other and got [a] chance to talk a little bit before the competition,” Youssouf said. “I thought it was really exciting and it allowed me to be more motivated cause now I was able to go against someone that I knew and knew it would be good fun.”

Having to prepare for the contest held in February, members will study certain topics within their teams of four. Topics, such as Preventing Extremism in Fragile States and Oceans: The World’s Garbage Dump, are assigned based off the study guide that is provided by the district.

“Anyone who is interested in Academic World Quest just note that there is a lot of work that you have to do,” Youssouf said. “If you are really motivated and interested in understanding the history of everything and you want to learn more in depth, then this is the club for you.”