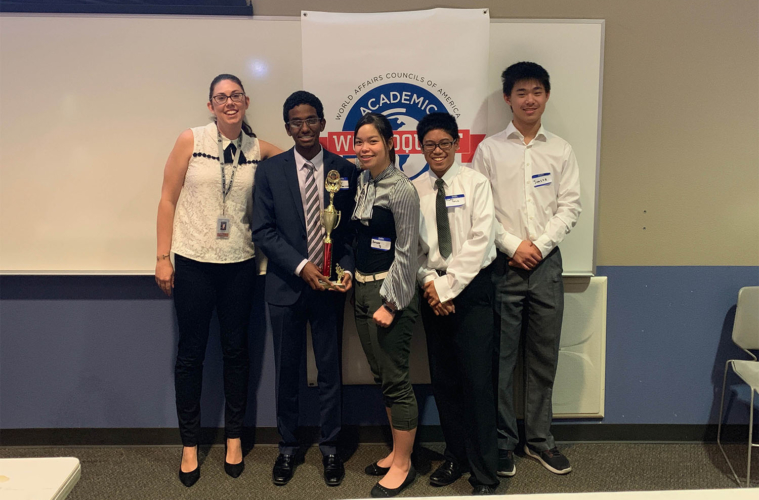 After the announcement that they had won second place, juniors Samer Youssouf, Amber To, Jonathan Denalo and senior Jimson Huang commemorate their win with Academic World Quest coach Jessica Kelly. “I joined the team because I wanted to become more knowledgeable and thought this would be a great experience to test my knowledge,” Youssouf said. Photo Credit: Samer Youssouf

After showcasing their knowledge on current events for Academic World Quest State tournament, the teams placed in second and fourth place on Saturday, March 30 at the College of Southern Nevada.

“Last year we placed last and second to last, so this was a big jump since we almost won,” Academic World Quest coach Jessica Kelly said. “Academic World Quest is so interesting because we get to talk about how America is impacting every other country in the world. I love being able to help teach my students how the rest of the world views [Americans].”

Academic World Quest is a team competition held across 26 states, hosted by World Affairs Council of America. At the tournament, students are tested on their knowledge on a variety of current events, including international affairs and culture.

“At first, I joined World Quest because Kelly is a very passionate teacher, but it grew into new perspectives and a love for all time periods in history,” junior Jessica Wiley said. “The meetings and competition were hard and vigorous, but it was worth it for getting second and fourth place in all of Nevada.”

The Academic World Quest teams had been meeting every Thursday, and were separated into two groups of four. The 10 topics that were needed to be covered were split between the eight members.

“This season went great and I feel like I learned a lot when it [came] to international history,” junior Samer Youssouf said. “I definitely will join next year, and I think we can improve by studying the topics more in depth along with quizzing each other so that we are more comfortable on these topics.”

Next year, the teams hope to recruit more members and win state so they can compete at nationals.

“My goal for next year is to win first at state,” Kelly said. “My goal for this year was at least third and we got second, so we can keep moving forward to first. The funny thing is the team that got second were two points away from being first, so getting first next year might be easier.”