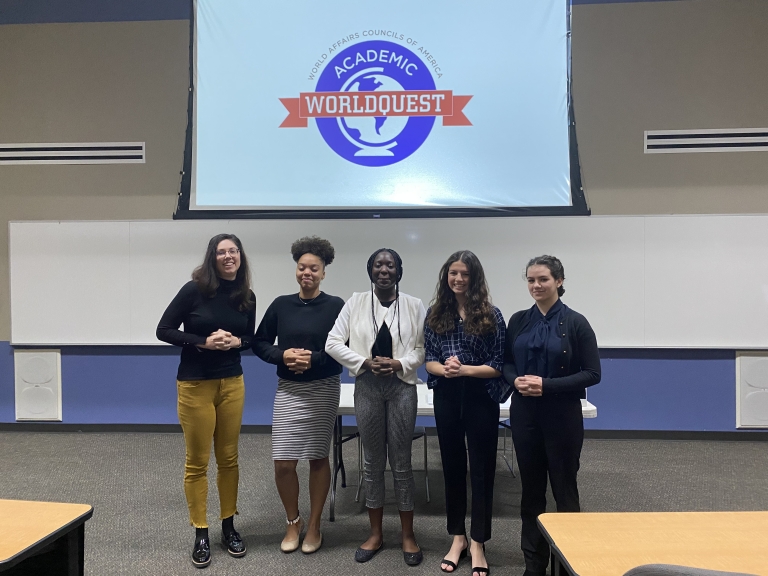 Being presented with their award, Academic WorldQuest adviser Jessica Kelly celebrates with sophomores Nia Anderson, Cheyann Thomas, Sara Fragrosa and Aliah Favela after placing sixth. Academic WorldQuest members competed at their state competition on Feb. 8 and the teams placed fourth, fifth and sixth. “I appreciate them for trying and I’m glad they worked so hard,” Kelly said. “We had new roadblocks emerge at the competition this year, but I’m still proud of them.”

After explaining their knowledge on current issues at the Academic WorldQuest state competition, the three teams competing placed fourth, fifth and sixth at the College of Southern Nevada on Feb. 8.

“It didn’t go as well as planned, but I’m proud of them for trying,” Academic WorldQuest adviser Jessica Kelly said. “There were a lot of different factors that I didn’t expect, so it did hinder our success.”

Unlike last year, students had one less month to prepare since the competition was in February, not March.

“I felt like our groups this year did learn a lot, but we all got caught off guard by the questions this year as it did feel a lot harder than last year,” Academic WorldQuest member Samer Youssouf said. “Although we didn’t place [in the] top, I am really proud of everyone who put so much effort into this competition.”

Academic WorldQuest is a team competition hosted by the World Affairs Council of America. At the competition, members are tested on their knowledge on current events, such as Brexit and ocean pollution.

“Personally, I think I actually did really well, because for my section of questions I got the most right, so that was cool,” Academic WorldQuest member Jessica Wiley said. “If I did it over again I would have studied more outside of the sources we were given because some of the questions were so obscure.”

At their only competition state, the three teams competed against three other schools. Each team consisted of four members. Next year, the teams will begin preparing earlier in the year to account for the missing month, with the hopes of placing higher.

“I only plan to start earlier next year, other than that I will keep everything the same,” Kelly said. “All my sophomores are extremely dedicated, so I hope next year they remain dedicated. They will only be as good as they want to be, so I hope they still care next year, to lead the next team. This was most of the member’s first competition, so they have the drive to place higher next year.”