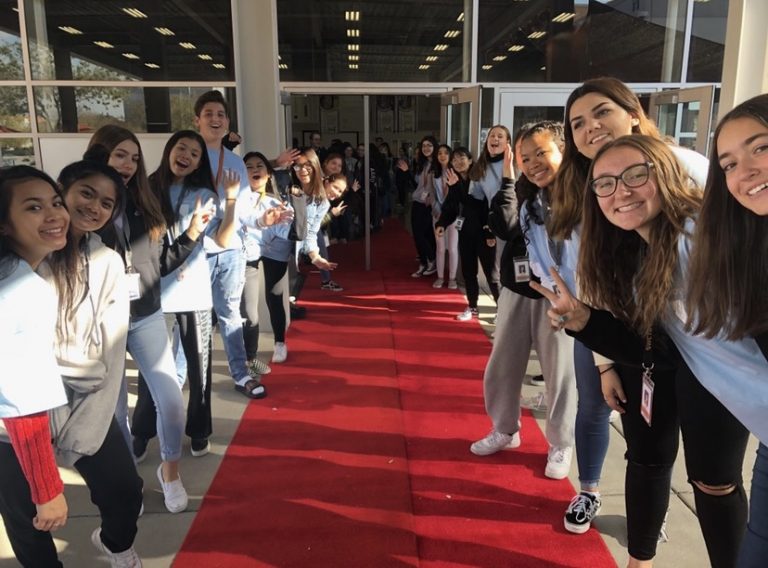 Trying to celebrate the winning classes who earned an ice cream party, Student Council members create a red carpet for students to walk on during November of 2019. Students created digital posters and videos to showcase why they should be elected for their chosen position. “I’ve been in Student Council since freshman year so I know how Stuco runs,” Student Body Vice President candidate Claire Cuddihy said. “I know how to be a good role model and being able to win this election would help me create better social skills and more essential leadership qualities.” Photo Credit: Student Council

Student Council officer elections are held annually so a new round of board members can be chosen for the following school year. For the 2022 school year, STUCO elections began on Monday and concluded at 5 p.m. today.

“Personally, Election Day is the scariest day, knowing that you could possibly get a position is amazing, but on the other hand, you could lose,” Cuddihy said. “It’s a 50/50 situation, but as a junior, this is the last election I can run in so ‘YOLO.’ I am also excited to see how differently it will shape our school and how Student Council will be run next year.”

Compared to in-person elections, candidates had to find other ways to interactively connect their ideas to the student body.

“Honestly, during precious years, everyone seemed to be mutual about who’s taking these SBO positions,” Farrales said. “No one really had to campaign at all because it was easier for people to show their capabilities and commitment to STUCO or the school. It was also easier for them to determine exactly who is great for the position.”

Without having hanging posters or doing a face-to-face Q&A, candidates have had to rely on social media and create digital elements to put forth in their campaign.

“COVID-19 has heavily influenced this year’s elections because our only way of campaigning is through the means of social media,” Cuddihy said. “If we were in person, we could hand out flyers, talk to people, hang up posters, etc; it’s definitely a change for sure.”

In order to run, students filled out an application for a specific position and created a one-minute video expressing themselves, as well as two graphics promoting the position they are running for. Later on in the week, candidates responded and answered questions the Student Body Officers asked them.

“For my Q&A, I wanted to be authentic as possible and say my exact thoughts. I wasn’t 100% focused on what the people wanted to hear, but being true to myself,” Farrales said. “I shared what I believe I’m capable of doing and the passions I hold close to my heart. During the thinking process, I thought about the struggles I dealt with during quarantine. Specifically, losing my mamang from covid. It broke me completely, but I learned so much about the true value of life and living in the present.”

Despite distance learning, the pressure and nervousness students normally have is still prominent especially knowing results will be out in a few weeks.

“Putting yourself out there is one of the scariest parts of elections and I feel like everyone campaigning has to deal with the struggle of trying to figure out the right things to say, really reflect on the type of person they are and think about certain qualities they have,” Farrales said. “It seems simple, but as a teenager, it can be hard in many ways, especially because we’re at the age where we’re just getting to know ourselves. It’s scary because I really got to know the traits you picked to present to people are totally within you but we really don’t know enough yet.”