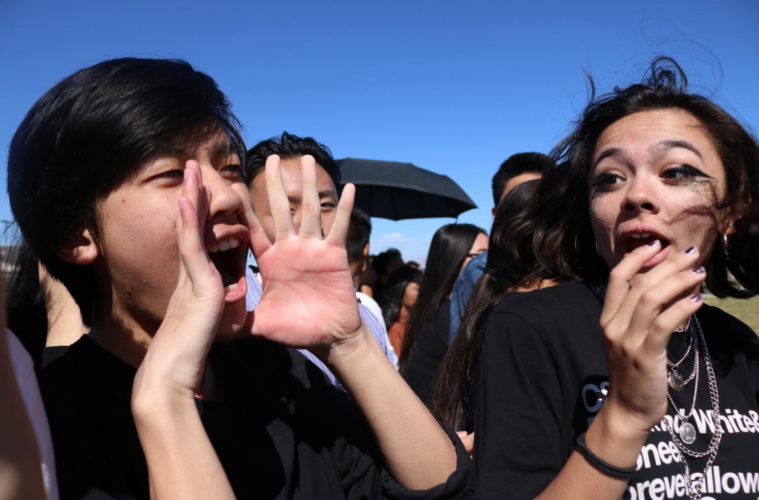 Cheering on K-Pop Club as they performed, juniors Brandon Wu and Aaliyah Lauder scream to hype up the team. Polynesian Club and K-Pop Club both performed at halftime. "My favorite part of the football game was watching K-Pop perform," Wu said. "I think I might join [KPop Club next year] so I can perform at the [flag] football game." Photo Credit: Kyle Bayudan

After restructuring how the annual Homecoming Flag Football Game would be played, the Professional Academy defeated the Design Academy with a score of 31 to 19.

“I’m really glad that our team managed to win since this is my last year,” senior Jason Nguyen said. “My team did a really good job and I hope that our win streak continues. It made me happy that no one got hurt and we all got to play the same amount of time.”

“I thought PA vs. DA overall was fun considering I was part of the Homecoming Court and Kpop club,” junior Allyana Gorospe said. “I literally slipped while doing the court games cause of the grass but my team tried our best.”

During halftime, the freshman Homecoming Court nominees won the relay race. Polynesian and K-Pop Club performed at the end of the break. Underneath the gazebo, snacks and drinks were being sold to raise money for clubs.

“This year we have the most members and that’s what made it such a special experience,” senior Anna Liang said. “We worked hard and finally had a chance to perform together. Even though I made mistakes, I still feel proud of myself and everyone who performed.”