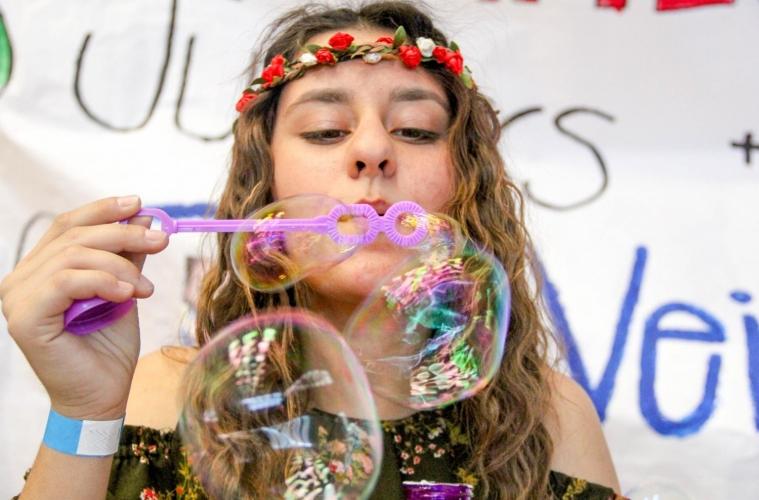 After dipping a plastic stick in a bottle of soap, a student blows bubbles at last year's Coyote Coachella. This year, bubbles and flower crowns will not be included in the purchase of any ticket because VIP is no longer an option. Photo Credit: The Howl Staff

Giving students a chance to showcase their talents, StuCo will be hosting a talent show at the third annual Coyote Coachella. For each one of the four talent categories, the audience will be voting for their favorite performer who will earn a $25 cash prize.

“Sometimes the artists are doing live art and they’re sketching right there so you can watch them,” Student Council adviser Miriya Julian said. “Student Council also has their big games out like the big Connect Four and corn hole. We’re just going to be hanging out and enjoying each other’s talents.”

Auditions took place before Spring Break. Contenders were emailed over break, notifying them whether or not they were selected.

The lineup for performances is as follows:

“I’m singing a mashup of ‘Let Me Love You’ by Mario and ‘Cater 2 U’ by Destiny’s Child with my partner Anastasia Xayarath,” freshman Athena Anuhea said. “The audition was intimidating and I didn’t know what to expect, but the people were singing in front of [us] were smiling so that made me more comfortable.”

Last year, two different packages of tickets were sold at $5 and $10, and each came with different packages. The general ticket only gave attendees access to the event, while the VIP package included bubbles, flower crowns and facepaint/glitter tattoos.

“[I regret not auditioning] because I didn’t have anyone to perform with and I also didn’t know about the prize,” junior Yen Binh Tran said. “If I did, I would have put more effort into auditioning. I could have used the money to donate to K-pop Club”

A DJ will be playing music before and after performances, and artists will have booths to sell their work. Three food trucks will be in the bus lot selling boba, an unknown food vendor and shaved ice.

“From the fashion show [I participated in] this weekend, I’m going to be selling clothes [that I made myself],” sophomore Ghyanni Ferraer said. “I’m also going to be doing henna and my sister is going to be threading eyebrows. I’m pretty excited. I’m hoping my booth will be filled because I’m really excited to do what I love to do.”

Tickets can be purchased at the door for $5, and attendees will be given a complimentary bottle of water and a henna or glitter tattoo. The event will be held in the gym this Friday from 1:30 p.m. to 4:30 p.m., rain or shine.

“I’m showcasing my fashion brand ‘Civil Disobedience’,” sophomore Cyncir Pollard said. “[I’ll be selling] really cute two pieces and stuff like that. I expect my turn out to be really good because I know that the stuff I make is good.”