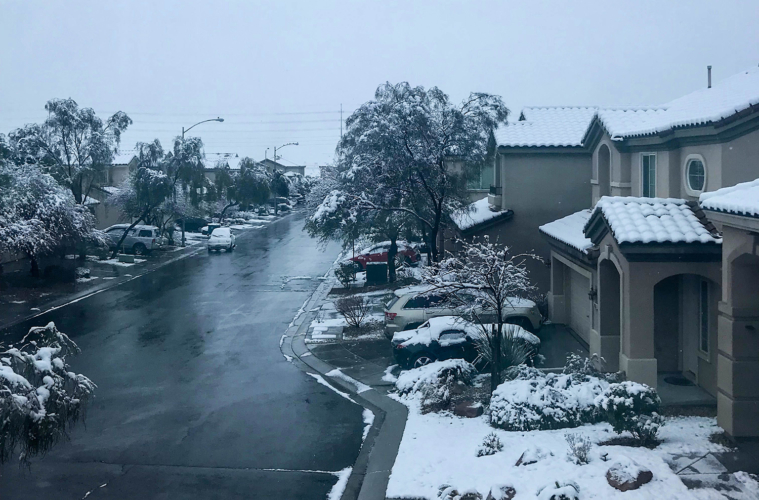 Friday, March 22 will remain an off-day for students and staff. March 22 was considered for the make-up day, but many community members articulated their concern that this was not enough notice for those who had already made plans. “I was pretty happy to have that Friday off for the so-called snow day,” freshman Gabby Jones said. “I guess it was pretty inevitable that we were going to have to make it up but I do wish it was [Friday] instead of taking away a day of our spring break.” Photo Credit: Jamie Khoung

After a meeting that took place on Thursday, March 14, the Clark County School District (CCSD) Board of Trustees voted that Monday, April 22 will make up for the snow day that occurred last month.

“We knew the day had to be made up and realistically, there were only so many days they could use and none of them were good,” Community Partnership Coordinator Brian Lindemuth said. “They were all going to interfere with people, students and staff. If they had made the day at the end of the school year, they would have run into the same situation where people had already had plans that they couldn’t get out of.”

Due to inclement weather and a multitude of complaints, CCSD canceled all school operations on Friday, Feb. 22. Upon canceling classes, CCSD announced that there would be a makeup day, but the date was undecided at the time.

“I live about 40 minutes from the school, and as a teen who’s never driven in the snow before, I thought it was extremely unsafe of CCSD to allow us to go to school on the day that it actually snowed,” junior Jennifer Shelley said. “I was already nervous about driving while it was snowing the night before, let alone in the morning while there was black ice, so I didn’t attend school that day.”

While teachers, staff and students had the day off during the snow day, administrators were required to work when they felt it was safe to do so.

“I am kind of upset that they had the makeup day be our last day of Spring Break,” senior Taurie McDaniel said. “Since a lot of people buy plane tickets and plan their vacations beforehand, I feel like a lot of people won’t end up showing up anyways, which defeats the purpose of a makeup day”

The original makeup day was proposed by CCSD Superintendent Jesus Jara to be on Friday, March 22, but was changed to April 22 after the Board of Trustees meeting. Students who do not attend school on the makeup day will be marked as absent.

“By district rules, that suggestion had to be voted on by the board,” Lindemuth said. “They felt that at that point, eight days wasn’t enough notice.”