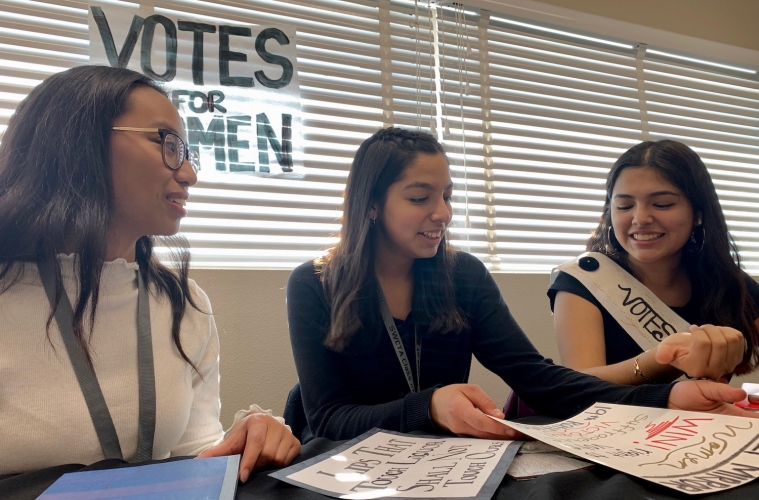 Researching her historical figure and helping her teammates, junior Giselle Marques-Bueno lists evidence and facts about her person. Students were required to research a historical figure’s opinions on certain controversial topics. “During the discussion we will be talking about topics like the temperance movement,” Marques-Bueno said. “This project is helping me learn and connect details about my character to U.S. history and how these important figures affected our country greatly.” Photo Credit: Gurleen Swaich

“I want to get the students talking as if they were real characters from the past and getting knowledge so that they can actually have a conversation like they are from that time period,” Kelly said.

Students were given a list of potential figures and were allowed to pick whichever person they wanted. They proceeded to research their specific person’s views on government issues.

“I’m researching on the Wright brothers, and I learned that they’ve impacted the outcomes of WWI because of the invention of the planes,” junior Laurenz Maoceros said. “This project really helps me learn about historical people through a fun project because we get to interact with others through a ‘dinner party’ and act out our character.”

During the discussion students will talk about different issues, such as women’s suffrage and students will be graded based upon their participation and research.

“This project is helping me because we get to embody a character,” junior Katrina Gorospe said. “We get to be interactive and learn by using our own research to learn about topics like women’s suffrage. My character is Carrie Chapman Catt and I’ve learned a lot about how she was the person that got women the right to vote.”

The Progressive Era ‘dinner party’ will lead into their next topic, World War I.

“My favorite part of this project was seeing students talk about their character as if they are the character and confronting other historical people that had something to do with their topic,” Kelly said. “By doing this project, I want students to know that history can be fun and the lives of these people mattered and got us where we are today.”